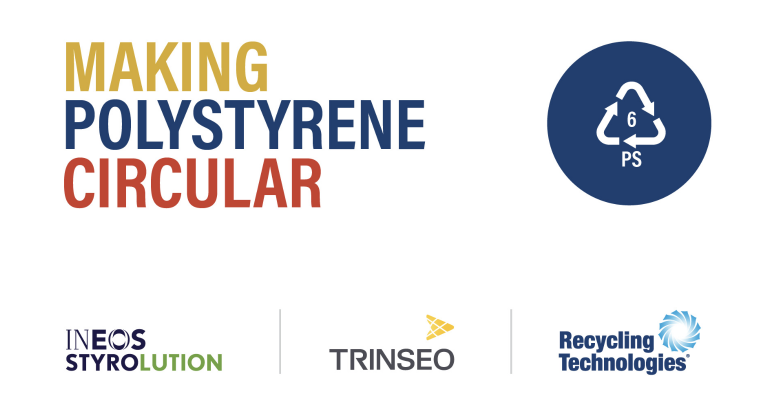 Prior to establishing commercial-scale plants in France and Belgium, a polystyrene recycling pilot plant will be built in the UK in 2022.

Ineos Styrolution and Trinseo announced that they have reached a significant milestone in their plan to build commercial polystyrene (PS) recycling plants in Europe. After a detailed assessment of technology options, Recycling Technologies has been selected as the technology provider because it produced the highest yields in converting PS to styrene monomer.

“Our collaboration with Ineos Styrolution and Trinseo is a strong recognition of our technology’s ability to make polystyrene circular,” said Adrian Griffiths, CEO and founder of Recycling Technologies Ltd. “We look forward to working with these two global leading companies to build Europe’s first chemical polystyrene recycling facility.”

The three partner companies share the goal of making PS a circular material through depolymerization. The unique properties of PS allow for full circularity, where PS waste is returned to its chemical building blocks before being polymerized again. The recycled PS will have properties identical to virgin PS. Life-cycle assessments show a significant decrease in greenhouse gas emissions when compared with PS production from naphtha, according to the companies.

Nicolas Joly, Vice President, Plastics & Feedstocks, at Trinseo and President of Styrenics Circular Solutions, commented: “Polystyrene turns out to be a wonderful polymer. Not only is depolymerization an effective recycling method, but it also allows for recycling while maintaining food-contact compliance.”

Prior to building the commercial-scale recycling plants, a PS recycling pilot plant will be built in the UK in 2022, and the technology will be further developed jointly by the three parties.

Ineos Styrolution plans to build its full commercial-scale recycling facility in Wingles, France. Trinseo announced its plan to build a plant in Tessenderlo, Belgium, which is expected to be operational by 2023.