Are big auto OEMs on the way out?

There's a looming question that I've only heard a few people ask: Are the big automotive OEMs about to get cut down to size by the Next Big Thing in manufacturing? Recently my colleague, Stephen Moore, who covers the industry from his home in Southeast Asia, wrote an article about Divergent Microfactories and I became curious. I wanted to know more.

There's a looming question that I've only heard a few people ask: Are the big automotive OEMs about to get cut down to size by the Next Big Thing in manufacturing? Recently my colleague, Stephen Moore, who covers the industry from his home in Southeast Asia, wrote an article about Divergent Microfactories and I became curious. I wanted to know more.

I went to their website, clicked on the press link and found a fascinating 15-minute video of the keynote address that Divergent Technologies' CEO Kevin Czinger gave at the O'Reilly Solid Conference on June 24. If you want to hear some groundbreaking, mind-blowing prospects for automotive manufacturing, you must watch the video embedded below. 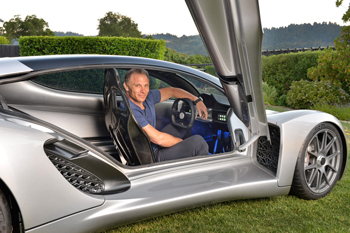 Czinger was involved in developing and building one of the first all-electric cars, which he was having made in China. "We thought we were saving the world," he comments in his speech, "but we were buying into a vision that could destroy us."

He says that he began to think about all the "input, materials and energy" that goes into making a complex product like a car, and about the current debate, "which is how we fuel our cars." The major concern among vehicle makers is with emissions. "Tail pipe emissions are the tip of the iceberg," said Czinger. He then goes on to show through charts and graphs how electric cars actually have twice the environmental impact that conventional cars do because of the way they are manufactured. Specifically, he cited the lithium ion battery plant he was standing in front of in China when he was busy saving the world with electric cars.

Czinger shows that a "far greater percentage" of the environmental damage comes from the material and energy used to make cars than from the tailpipe. "[That has] a far greater impact than how we fuel them," he adds. He then displays a graph that shows gas and natural gas cars are three times better environmentally than electric vehicles, and calls for the "dematerialization and democratization" of manufacturing vehicles.

Dematerialization means "greener, lighter, safer and made locally" in "microfactories" around the world with startup costs of $20 million. "You no longer have to be a billionaire to design and build new cars at scale . . . using tools to develop and design cars to meet the needs of local consumers."

The "next new thing" is a new production system, Czinger says, not the one that was developed at the beginning of the 20th century. "How we make things is key," he stresses.

I have often thought about the unintended consequences of the electric car fad: The need for more coal-fired or nuclear power plants to "fuel" the batteries every night so you can make it to work and back the next day; the lithium ion batteries that burst into flames in a rear-end collision and the need for fire trucks to carry special foam to put out these toxic fires. There is also the manufacturing of these batteries, which, as Czinger points out in his keynote, are manufactured with environmentally damaging consequences. Yet all we are told to think about by the talking heads in the media is "reduce the use of fossil fuels" to save the planet from CO2, which is a trace gas that we all need in order to survive!

When Google decided to actually build its autonomous cars, rather than just retrofit cars already on the market, I'm sure there were raised eyebrows all over Detroit. Prototype cars are currently being road tested in Silicon Valley, CA. With a team of Tier 1 suppliers named back in January, including Bosch, LG Electronics, Continental and Rousch, Google began building its prototypes, according to a report in IHS SupplierBusiness.

However, said IHS, when it comes time for full-blown production, Google will engage with an automaker. The automakers have seemed content—even supportive—of letting their suppliers do the R&D, something IHS calls "a costly element of auto production," and will be more than happy (I think) to build these autonomous vehicles. And as IHS SupplierBusiness pointed out, "it has the potential to free up Google from having to resolve industry issues that automakers can address much more quickly and efficiently—for example, safety system regulations, lighting standards and other functional vehicle issues."

While Czinger is certainly a visionary, and global microfactories in cities all over the world designing and manufacturing cars from 3D direct metal laser sintering or selective laser melting and carbon fiber certainly sounds like the next big thing, there are all those pesky government regulations, liability issues (just ask GM about that) and other challenges that come with being a vehicle maker. That could put a damper on Czinger's new-manufacturing dream.

That said, I'm glad to hear someone is bringing to the forefront the real issues of not only electric cars but any new technology that is seen as the "silver bullet" to solve the world's problems. We can't continue to allow them to keep us focused on one thing while, in the background, a dozen other problems are being created—those unintended consequences that always seem to arise just when we thought it was safe to go back in the water!