Fast-Charging Lucid Air Has Sabic Inside 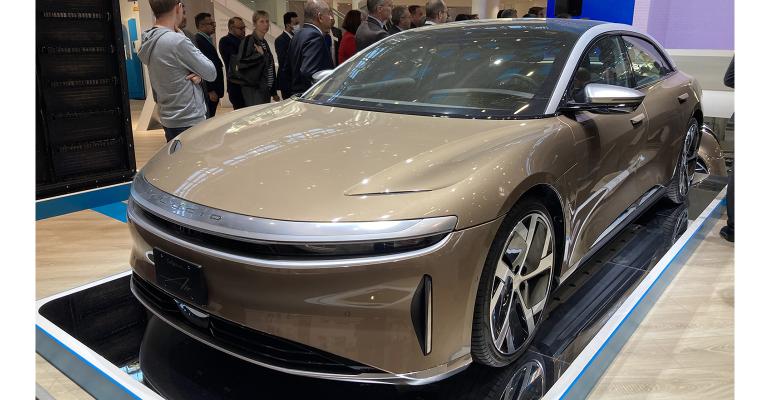 Sabic supplied materials and engineering support for more than 25 applications in the luxury e-car.

The Lucid Air reportedly is the world’s fastest-charging luxury electric car with a range of up to 530 miles on a single charge under ideal conditions. Materials supplier Sabic helped to make that happen, which is why the Lucid Air is on display in hall 6 on stand D42 at K 2022 in Düsseldorf, Germany.

Sabic thermoplastics are present in more than 25 applications, including structural and battery components and interior parts. Sabic said that its engineering support helped reduce warpage, optimizing manufacturability as well as part performance. At its stand, Sabic highlights three of those applications.

The front-end module was molded in a single shot using Stamax long-glass-fiber polypropylene with organosheets. The pre-cut sheets were inserted into the mold, shaped, and combined with additional inserts and then overmolded to form a lightweight yet rigid composite. The process eliminated some assembly work and consequently lowered production cost, according to Sabic.

The front trunk, or frunk, is a single-piece molded tub that combines thermoplastic elastomer with the aforementioned Stamax resin. Again, the production process eliminated several assembly steps compared with traditional approaches. In both of these applications, Stamax resin was selected because of its high stiffness-to-weight ratio, low warpage, adhesive properties, and impact performance.

The battery module housing called for Lexan FR resin because of its stiffness-to-weight ratio, light weight, thermal and dimensional stability, and impact and ductile properties. The design integrates the electrical conductor directly into the housing in a one-shot molding process. No adhesives were needed, thus saving assembly time and improving quality and consistency, according to Sabic.

Lucid Motors is a Silicon Valley–startup that began in 2007 as a supplier of EV batteries and powertrains. It pivoted to the production of high-performance luxury EVs in 2016 and announced plans to build a $700-million manufacturing plant in Casa Grande, AZ. The company received an influx of funding in September 2019 from the Saudi Arabian sovereign investment fund to the tune of more than $1 billion. In February 2021, Lucid Motors announced a deal valued at more than $11 billion to merge with Churchill Capital Corp IV, a publicly traded special-purpose acquisition company.

The company has had a bumpy ride recently, with its stock price plummeting by 68% this year, according to capital.com. Lucid Motors cut its production target in half for 2022, from 12,000 to 14,000 vehicles per year to 6,000 to 7,000, which was already a reduction from the original forecast of 20,000 cars this year. The company blamed supply chain and logistics issues for the scale back.

So, there’s that. But how does the Lucid Air drive, you may be wondering? Dan Carney took it for a test spin last year; here’s what he had to say.

K 2022 runs through Oct. 26 at Messe Düsseldorf in Düsseldorf, Germany.