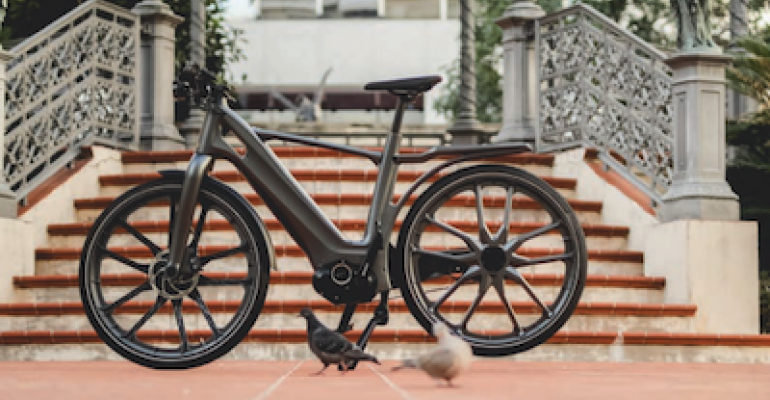 Materials supplier Solvay worked hand-in-hand with a Monaco-based company to develop a cutting-edge electric bike made entirely of plastic, and to introduce one of its newest high performance polymers in the process.

Thierry Manni is a former CEO in the automotive industry. Passionate about sports, technological innovation and sustainable development, he quit his job and started his own e-bike company, Stajvelo, in 2017. “Together with a few friends, we started thinking about what we could do in the field of urban mobility,” he says. “A plastic bike, now that didn’t exist!”

In addition to being technically innovative, the friends wanted their bike to be stylish and environmentally sustainable. “We wanted to create a lifestyle bike, not a high performance sports machine, a bike that’s a design object but that people could use it in their daily lives”, Thierry continues. “We started with a blank sheet of paper, created a skeleton with certain technical characteristics and then asked a designer in Italy to come up with ideas. Instead of starting with a design and trying to make it work technically, we did things the other way around.”

The first prototype was created in 2018, and discussions began with materials supplier Solvay as the supplier of the high performance polymer that was required to build such a bike. “We were immediately impressed with Thierry’s concept combining innovative technologies, materials and sustainability,” says Eric Martin, the Global Manager for Long Fiber Thermoplastics at Solvay’s Specialty Polymers GBU. “Solvay was eager to become strongly involved with the project as we believe this product will be a beacon for sustainability. It also was a great way to demonstrate what is possible when creativity, engineering, ambition and chemistry work together. Innovation was the main driver for this project, and we were excited to have one of our materials be part of this project.”

The material in question is the latest in Solvay’s line of long fiber thermoplastic (LFT) compounds. “When Thierry came to us, we were in the pre-commercialization phase of a high-gloss, long fiber compound, and we saw this as a great way to introduce this material,” explains Eric. Long fiber thermoplastics were required here, to ensure the performance of the material in a wide range of demanding applications on a bike , especially complex ones such as wheel rims. And using such the LFT material also made the bike recyclable; a rare quality.

“LFT compounds provide a unique combination of stiffness, impact strength and dynamic fatigue performance,” continues Eric. In addition to being ideal for sporting goods, this makes the product a good fit for automotive and consumer goods applications as well, where lightweight and resistance are also desirable qualities.

In addition, Stajvelo insisted on production of the bike in Europe. This required a material and design which allowed for cost efficient production. LFT can be injection-molded, allowing to create a designer bike that can be both produced in Europe and recycled. “I didn’t want to use carbon fiber because it’s non-recyclable,” says Thierry Manni.

“In the bicycle industry, there is a monopoly on aluminum and carbon fiber frames made in Asia,” explains Eric. “But Stajvelo insisted on local production, with sustainability objectives in mind. Their bike is also much more recyclable than standard bikes.”

On top of the performance characteristics of Solvay’s LFT, which were perfect for the e-bike Thierry wanted to create, there was another aspect that truly cemented the collaboration between Stajvelo and Solvay: the human element. “We immediately had a strong working relationship,” says Eric. “We provided material for their initial tests, collaborated on the mold design, carried out simulations and worked through technical issues together. There was a great deal of trust between Stajvelo and Solvay from the very beginning.”

“We identified materials from various companies with the properties we needed, but the relationship with Solvay was the decisive element in our final choice,” confirms Thierry. “I believe in the human element when conducting business, and it’s been a real partnership. Solvay was always there for us.”

Stajvelo began the production of its RV01 model in April 2019: 15 bikes are manufactured per week in the company’s workshop in Monaco, fully equipped for security (with built-in lights and a geolocation device in case of theft) and maximum comfort – and the next model is in the works. Sales are conducted exclusively online for the time being. The list price is €6,990 (US$7,925).