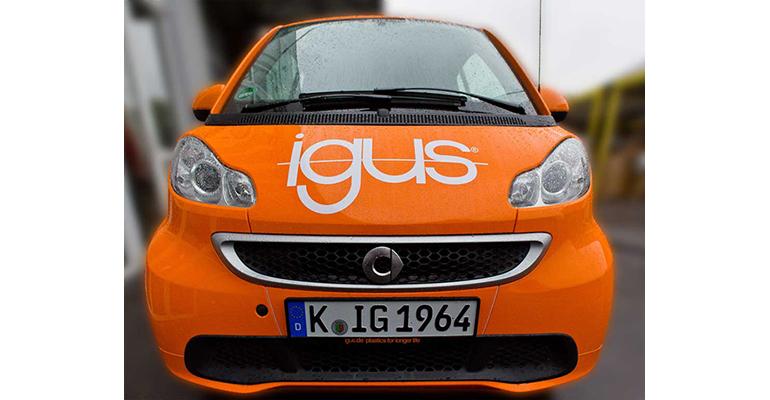 Igus is going to great lengths — some 100,000 kilometers, in fact — to prove that its dry-running bearings are as good as, or even better than, factory-specified metal and lubricated plastic bearings in automotive applications.

It all started at the Cologne University of Applied Sciences, where a smart car was dismantled to determine which factory-installed bearings could be replaced safely with igus' iglide bearings. To stay in the good graces of German regulators, bearings used in safety and crash-related features of the car were off limits. But there were plenty of other switch-over opportunities.

Ultimately, 56 iglide bearings were retrofitted in the car's hinges, steering systems, gears, water pump, brake calipers, and other components. Then the fun began.

The retrofitted car and the driver, a student from Cologne University taking a break before starting a graduate program, were introduced at a press conference at igus' Cologne headquarters in January 2014. Driver Sascha Laufenberg and the smart car began their road trip in India, eventually logging several thousand miles through China, South Korea, Taiwan, Japan, Brazil, and now North America. I met up with Laufenberg and his entourage, led by igus Inc. Marketing Manager Michael Hardy, in the Los Angeles area in August, where they were on their way to a meeting with engineers at Tesla. This leg of the journey had started in Alaska, winding through the Yukon Territory and down along the west coast.

"It has been eight months, and a lot of fun, but my classes will be starting soon," said Laufenberg, explaining why this months-long road trip is coming to a close, at least for him. Kayla Abbate, a recent graduate of Iona College in New Rochelle, NY, and the car, however, will soldier on. She is in Minneapolis, as I write this, en route for the igus facility in Providence, RI, where the North American part of the expedition will end in October. Following what is sure to be a rousing welcome at the plant, the car will be airlifted to Europe, where it will begin an almost eight-month rally, crossing the finish line in Hannover, Germany, just in time for the massive Hannover Fair in April. There, the bearings will be removed and, it is hoped, shown to be up to the task of weathering more than 60,000 miles through mountains and desert, blistering heat and snow, none the worse for wear.

The initial impetus for this motoring marathon is igus' 50th anniversary coupled with the 30th anniversary of the iglide bearings. It's a fun, high-visibility way to get the word out about these products, especially in the North American market, says Hardy. "Igus is well known in Europe, of course, and we have a large market share in cable carriers in North America, but not enough people know about our iglide bearings here." A small orange car on a long journey, it is hoped, will give the brand some traction.

A key advantage of the bearings are their self-lubricating properties, says Hardy. "The car is a good conversation starter as we visit existing and potential customers," says Harding. The fact of the matter is that "when engineers hear bearing, they think metal," he says. "And, of course, plastic is not perceived as an environmentally friendly material." But a case can be made, adds Hardy, that the grease and lubricants required by other bearings are far worse from an environmental standpoint. This campaign, says Hardy, is designed to raise the profile of igus, its iglide bearings, and the expertise that the company has developed over a half century.

It's also doing some good along the way: igus will donate one euro per mile travelled within each country to a charity chosen by the igus subsidiary in that country.

PlasticsToday Senior Editor/Asia Stephen Moore reported on the launch of the global tour back in February, "Fifty-six plastic bearings take nine-month world tour." Check it out.