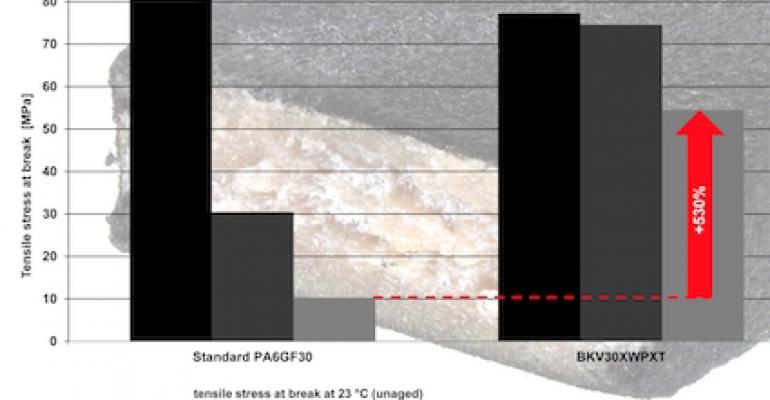 The new grades meet requirements of the leading welding methods, and target under the hood applications exposed to high humidity.

Lanxess has developed four polyamide and two polybutylene terephthalate (PBT) compounds for welding plastic parts. The new materials have been optimized for applications under the hood and for high-volume production.

“They meet all the latest requirements, such as high engine compartment temperatures, higher internal pressures in hollow components and the trend towards smaller installation spaces. One advantage of all the products is their wide processing window, which supports a stable, cost-efficient welding process,” explains Frank Krause, joining technologies expert at Lanxess.

The advantage of Durethan BKV 30 XWP HV (High Viscosity) over BKV 30 XWP is its higher melt viscosity, which is a major plus in vibration and heated tool welding, because it widens the processing window of both methods. “The compound results in very mechanically strong welds. For example, the bursting strength of air intake manifolds for two four-cylinder engines improves compared with equivalents made of a standard polyamide 6 (30 percent glass fibers) by more than 16 percent for the one module and nearly 40 percent for the other,” says Krause.

Heat-stabilized BKV 30 XWP XT (Xtreme Temperature) can be used for continuous service temperatures of up to 200°C. “As far as we know, this premium polyamide is unique on the market thanks to its high post-aging weld strength – both at room temperature and at the high temperatures typical of engine compartments,” explains Krause. The melt viscosity is comparable to that of Durethan BKV 30 XWP HV, meaning it also offers advantages in terms of processing. Conceivable applications include charge air tubes and intake pipes as well as hollow components in the oil circuit.

Durethan BKV 30 XWP LT (Laser Transparency) displays elevated laser light transmission in the wavelength range typical of laser transmission welding. “It ensures a high and rapid delivery of heat to the weld region, which promotes cost-efficient manufacturing,” explains Krause. The new polyamide will be available naturally colored and in a special black. Potential applications include housings for oil, airbag and other sensors, housings that are welded to a cover, and hollow components with complex, mechanically sensitive internal geometries, such as air intake chambers.

The PBT compounds Pocan B3235 LT and B3235 HR LT likewise were tailored to laser transmission welding. They are available in natural color tones and in a laser-transparent black for near-infrared. Virtually no comparable products with the same high level of laser transmission and the same high level of properties are sold on the market according to Lanxess. “Pocan B3235 HR LT is hydrolysis-stabilized and especially suitable for parts in the engine compartment that must be impervious to heat and moisture.

We see good application opportunities for our material in housing components for control devices, such as electronic parking brakes, which are assembled by means of laser welding,” says Joachim Morick, Product Developer for Pocan. Compared to Pocan B3233 HR, its laser transmission is more than twice as high in the wavelength range of 800 to 1,200 nanometers typical of laser welding. Pocan B3235 LT is the material of choice for laser-weldable PBT components not exposed to high temperatures and moisture. It is almost twice as laser-transparent as the standard PBT Pocan B3235.