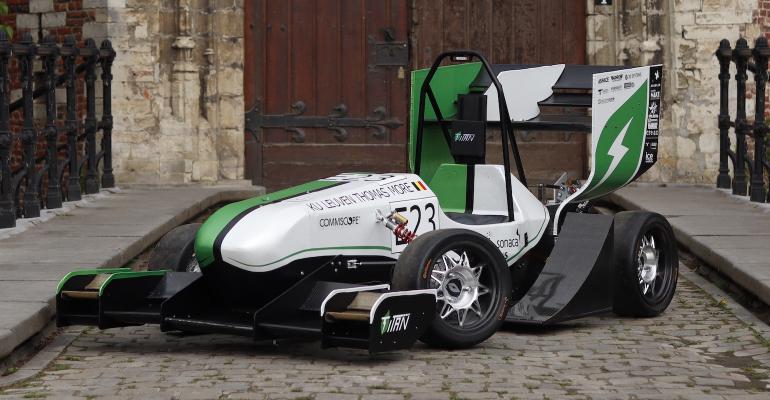 The lightweight front-wing component can withstand forces equivalent to almost 1000 times its own weight.

A recycled polyethylene terephthalate (rPET) honeycomb material developed by EconCore is being harnessed by the Formula Electric Belgium team for its Titan race car. The 100% rPET honeycomb cores are predominantly sourced from non-food post-consumer and industrial PET waste streams. Based in Leuven, Belgium, EconCore is a specialist provider of technology for cost-efficient continuous production of honeycomb cores.

Due to its advantageous mechanical performance, low weight, and high temperature stability, rPET is the material of choice for a range of applications including automotive, transportation, building and construction, industrial packaging, graphical displays, and furniture. One industry where the mechanical properties and weight of a material solution can be the difference between winning and losing is motorsport.

EconCore’s rPET honeycomb cores are currently being used by Formula Electric Belgium within the front wings of its race car. The team of engineering students produced the front wing skin out of natural flax fiber. Last year, the team used carbon-fiber-reinforced composites for the skins of the wing profile; to give the wings greater stiffness, aluminum stiffeners like those found in airplane wings were added. To adopt a more sustainable approach without compromising on performance, Formula Electric Belgium substituted the aluminum stiffeners with rPET honeycomb to produce a sandwich panel that was both lighter and more rigid.

Formula Electric Belgium required a thermoformable material for its front-wing design. The team started with constant thickness to shape the wing, using heated molds to press the core into shape. The entire undertray of the 220-kg (485-lb) race car was also made from EconCore’s rPET honeycomb cores.

By optimizing the use of rPET honeycomb technology, the Formula Electric Belgium team has been able to reduce wing weight by 26% compared with the same-size wing from last year. The lightweight front wing component is also highly rigid, capable of withstanding forces equivalent to almost 1000 times its own weight. The Titan race car has undergone multiple tests within its various stages of development; under a three-point bending test, the wing was capable of withstanding 46 kg (101 lb) of force.

For the 2022 season, the use of lightweight materials has enabled Formula Electric Belgium to produce a race car with a total weight of only 220 kg (485 lb). As the founder of Lotus Cars, Colin Chapman, famously once said: “Adding power makes you faster on the straights; subtracting weight makes you faster everywhere.” Formula Electric Belgium certainly isn’t lacking in power, either: Its race car goes from 0 to 60 in less than 2.5 seconds.

Throughout the development stages, EconCore opened its doors to the Formula Electric Belgium team — use of the in-house testing equipment to evaluate the strength of the material proved crucial to the entire development process.

Wouter Winant, Technical Manager at EconCore said: “With the rPET honeycomb core, Formula Electric Belgium was able to produce a highly rigid, lightweight front-wing component that weighed in at only 50 grams. And at the same time this shows that achieving optimal performance is possible with sustainable materials. Our rPET honeycomb core technology is available to be licensed for a variety of applications, and Formula Electric Belgium have perfectly demonstrated the material’s versatility.”