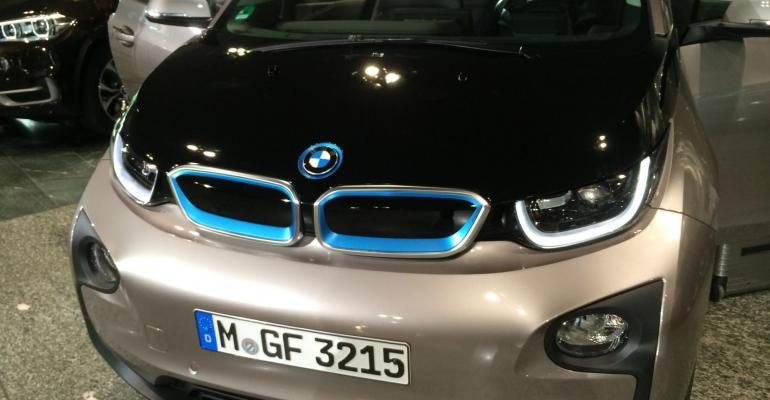 Mannheim, Germany - The inescapable theme at this year's Plastics in Automotive Engineering conference, organized by the Association of German Engineers, was lightweighting, and the buzz word was carbon fiber. With good cause.

Mannheim, Germany - The inescapable theme at this year's Plastics in Automotive Engineering conference, organized by the Association of German Engineers, was lightweighting, and the buzz word was carbon fiber. With good cause.

One of the main highlights on display was the new BMW i3, the first result of BMW's Project i initiative, which aimed to develop sustainable—FSC-certified eucalyptus wood veneer decorative elements can be found in the i3—and forward-looking mobility concepts. The i3 represents BMW's first foray into electromobility on a large scale, as well as illustrating BMW's "rigorous lightweighting-optimization of the vehicle concept and material," as the company put it. To make up for the additional weight of the electrical components, a whole new body concept had to be developed, called LifeDrive, in order to satisfy the requirements of lightweight, sustainable vehicle design. This concept comprises a full carbon-fiber-reinforced plastic (CFRP) passenger cell, called the Life module, combined with an aluminum chassis (the Drive module).

According to BMW, the use of CFRP offers potential weight savings of at least 30% compared with aluminum and 50% compared with steel. Yet the use of CFRP has benefits that go beyond lightweighting alone, said company engineers during a plenary presentation at the VDI conference, such as enhanced crash and acoustic properties and a better design/quality perception. Its use also eliminates the need for various press and paint shop operations.

Until now, large-scale use of CFRP has not been feasible, due to cost, processing and manufacturing concerns. According to BMW, these concerns now have been largely addressed. To secure its supply of the material, the BMW group operates a carbon fiber facility with the SGL Group at Moses Lake in Washington state, where the rovings for the BMW i3 and BMW i8 are sustainably produced. The facility runs on 100% CO2-free hydroelectric power. 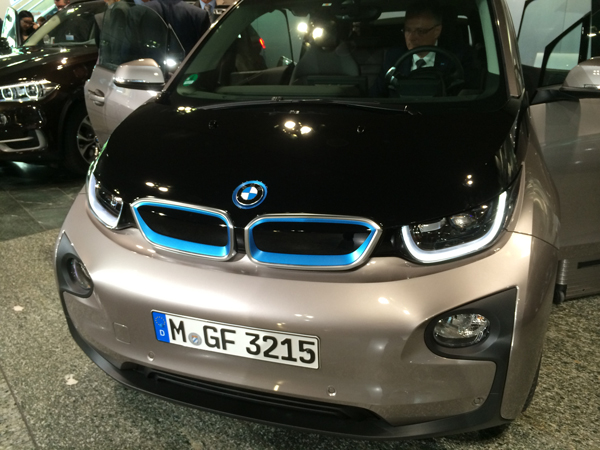 The rovings are processed into lightweight textile sheets at Wackersdorf, in Germany, after which they are formed into lightweight body components at the plant in Landshut. BMW has spent 10 years developing and automating CFRP production processes, resulting in high-volume, economic production with a high degree of process reliability.

At the newly built CFRP facility in Leipzig, carbon preforms are produced which can be joined together, for example, to make large-area body components, which would be far more difficult to make in aluminum or sheet steel.
The next step is the rapid transfer molding process, during which liquid resin is pumped into the preforms at high pressure. It is only after bonding and hardening that the CFRP acquires its final properties, which makes this an extremely versatile material. By simply adjusting the structure of the fibers and matrix, function- and component- specific laminate design becomes possible, so that different design requirements can easily be met.

In order for this to be economically efficient, a continuous process chain from fiber production through the recycling of the fibers and composite materials must be firmly established. Hence, in the course of the development of the BMW i, a recycling concept was developed that, says BMW, is unique in the world, for CFRP components, body parts, and sorted production waste. Different processes have been implemented to enable high-quality recyclable production waste, scrap from cars that have been declared a total loss following a collision, and end-of-life vehicles to be re-used.

BMW engineers noted that the new production structure cannot be compared to conventional sheet steel production. "Production-specific investment is considerably less. Construction costs are markedly reduced by the omission of a classic paint shop and cathodic dip coating. For the first time, the industrialization of large CFRP parts is a realistic option," they said.