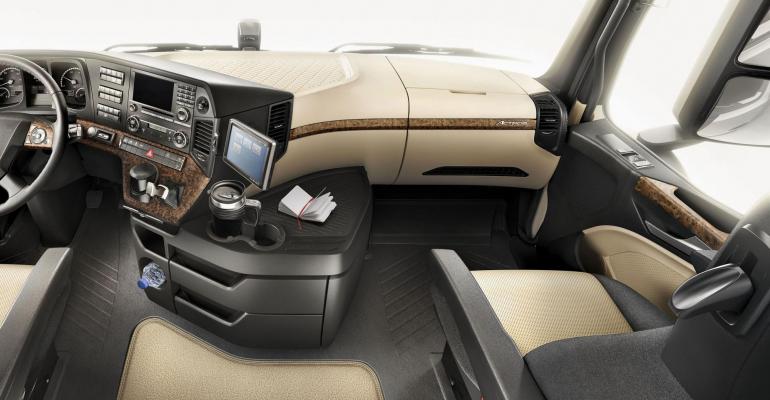 Even truck drivers crave for a more comfortable driving environment and molded parts with soft touch-surfaces that can be produced in just a single process step by applying the Dolphin-method are reportedly  making an essential contribution to promote this trend.

Even truck drivers crave for a more comfortable driving environment and molded parts with soft touch-surfaces that can be produced in just a single process step by applying the Dolphin-method are reportedly  making an essential contribution to promote this trend.

The first commercial application of the process developed by Engel (Schwertberg, Austria) started this past autumn, with Daimler supplier SOLE S.p.A. (Oderzo, Italy) manufacturing cockpit covers with soft touch surfaces for the new Mercedes-Benz Actros. SOLE is a part of the Prima Group (Torrice, Italy).

The production line, which is operated by SOLE at the Daimler works premises in Wörth, Germany, is composed of an Engel duo injection moulding machine with an horizontal intermediate rotary table system, a multiple-axis industry robot and equipment for physical foaming. First of all, the conventionally molded rigid core layer is injected. This is followed by overmolding of a foamed-in-place thermoplastic elastomer in one total machine cycle. The Dolphin-process is said to represent an economic alternative for the production of hard/soft components in comparison to other conventional multi-component and foaming methods.

The highly integrated manufacturing method was developed by Engel Austria in cooperation with mold manufacturer Georg Kaufmann (Busslingen, Switzerland) resin supplier BASF (Ludwigshafen, Germany) and compounder P-Group (Filderstadt, Germany). It was originally presented at the K-Fair in 2007 together with automobile supplier Johnson Controls (Burscheid, Germany). The process has undergone further development in the last few years at SOLE in order to optimize it for mass production. Besides Engel, Georg Kaufmann and P-Group are participating in the Actros Project.

"The production start proceeded as planned," says Michael Fischer, Sales Manager for Technologies at Engel. "The Dolphin method's potential is enormous due to the high level of process integration as well as the high quality of the component surfaces. Negotiations with clients to start further series applications are currently in progress."â€‘[email protected]