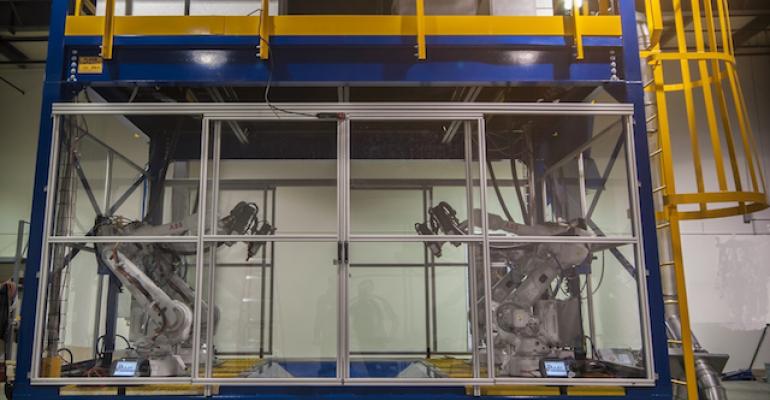 At the company’s booth at the recent SPE Thermoforming conference, Duley noted how much more precise and accurate trimming can be with the company’s new equipment. “We can trim at any speed within an accuracy of ±0.15mm (0.006 in.), which means that our TrimBobotics cells are as precise as metal trim dies,” he told PlasticsToday. “The TrimBotics cell is much more flexible than a trim die because it has the flexibility of easily changing trim lines or adding/removing holes or cutouts.”

The TrimBotics cell first is custom designed in SolidWorks to meet the needs of the customer. Then the SolidWorks models are imported into RobotStudio, a powerful software tool that can be used to program robots both off- and online. All of the paths, work objects, I/O, tools and more can be programmed before construction has begun. Simulation also provides an accurate estimate of cycle time, and shows all end-of-arm motion that each robot will perform. “Using RobotStudio, we are able to import an offline program into a robot and have it producing nominal parts within hours instead of days,” said Duley. 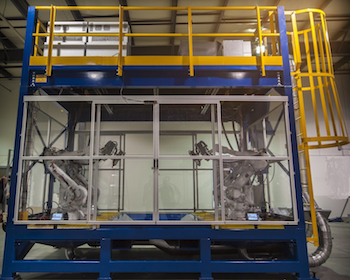 Thermoformed parts are increasing in size, as OEMs discover the advantages of thermoforming as a process technology that can easily rival injection molding. As the parts get larger, Duley said that the systems the company builds are expanding to accommodate those large parts. “Some of the systems we’ve built can handle parts as large as 84 x 64 inches, which is getting to the size where it’s difficult for an operator to handle,” he said. “With our TrimBotics cells, the automation can load the part into the router, then unload the trim (flash) and completed parts, and drop these off at different stations, such as placing the routed part into a secondary machine for additional operations.”

“Typically, the thermoformer can run faster than the routing cell, so previously two trim router cells would be needed for one thermoforming machine,” explained Duley. “With the large TrimBotics cell that utilizes four robots, customers only need one trim router cell for every thermoforming machine. This keeps the footprint down on the production floor and saves on cost. Users can switch out the trim cells in about 15 minutes to run a different part, so there is savings in the change-out time.”

One application example for TrimBotics cells is underbody panels for the automotive industry. “For years, automotive OEMs concentrated on the shape of the vehicle and the aerodynamics of the exterior body to increase gas mileage, looking at things that interfere with airflow,” explained Duley. “They never worried about underneath the vehicle. Now they find they can get improved gas mileage by putting underbody panels on millions of vehicles. This reduces overall fuel consumption of their fleet, which is better for the environment. These kinds of quantities are also driving the demand for automation,” Duley added.