Entrepreneur looks to reduce both plastic waste and poverty

It's not often I talk with someone who claims they will change the world. It's even more rare when it's someone who might just do it.      David Katz isn't your typical entrepreneur. Not only has he personally consulted with more than 700 businesses about the use and implementation of logistic technologies, he's also an MMA fighter. And I believe his latest project is something the plastics industry will find of interest.   I recently talked with David on the phone and he calls this project a "lifelong journey."

It's not often I talk with someone who claims they will change the world. It's even more rare when it's someone who might just do it.

David Katz isn't your typical entrepreneur. Not only has he personally consulted with more than 700 businesses about the use and implementation of logistic technologies, he's also an MMA fighter. And I believe his latest project is something the plastics industry will find of interest.

I recently talked with David on the phone and he calls this project a "lifelong journey."

"I enjoy the beach and find myself most at home there," he said. "I have been so discouraged, as the more I travel, that it's been difficult to find places that haven't been spoiled by people viewing the beach as a dumping ground."

"For instance, I took a trip to the South China Sea and I wanted to go to a dive site and as I looked for a place, I read a review that there was an overwhelming amount of plastic, in fact the plastic was more visible than the sand," he said. "It's a catastrophe. I'm not an environmentalist, but a humanitarian, and I know plastic waste truly does affect people."

So, like many people, Katz felt disillusioned with the amount of plastic waste on beaches. This is when other influences started to help feed an idea.

One day he took his son to an arcade where they played video games in order to receive tickets for prizes.

"I saw that there is a real incentive to play games in order to get cool toys. I could tell the value of the tickets is far greater than the value of the toys they exchange it for," he said. "I started to think about how to incentivize people and what they react to. How to make and provide value in what people discard and create a currency to make it tradable for something - that would be a big incentive." 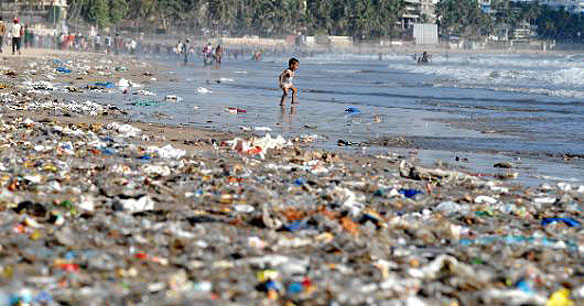 With that, Katz established The Plastic Bank, an organization designed to remove plastic waste from the world's oceans, beaches and waterways while at the same time empowering people living in poverty to raise their standard of living.

"Poverty affects so many around the world," he said. "But if you can free their minds and show they can contribute to society and to a solution, that is giving people hope. When they look at garbage around them, the plastic that is ruining their community, and change their eyes where they view it as gold - that will change everything."

How it works
The organization wants to establish 'Plastic Banks' in impoverished areas that have an abundance of plastic waste. People in the area will collect the plastic waste and have the opportunity to exchange the plastics as a type of currency.

When operational, The Plastic Bank will exchange harvested waste plastic for micro-credit loans and access to 3D print shops, making what was once garbage into the raw material for products like tools, parts, household items and more, which the organization believes will allow individuals to be self-sustaining.

Katz said the number one question he is asked is why can't people exchange the plastic for cash. But he said the idea is not to simply hand out money, but to give the impoverished people a chance to become entrepreneurs of their own.

A major focus will be on educating and empowering local people to reveal the value in themselves and to see the value in transforming repurposeable plastics into necessities and entrepreneurial opportunities. Additional efforts will go toward community collection projects that raise the overall standard of living in host communities.

"Why give cash when you give them the opportunity to be creative and look for solutions in their society? That is much more powerful," he said.

Many of the impoverished areas The Plastic Bank is targeting do not have much of a recycling infrastructure in place. So

the organization is working with MBA Polymers, a global company that recovers plastics from end-of-life durable goods. MBA has more than 300 million lb/year of processing capacity in Europe, China and the U.S. to turn waste into recycled plastics. MBA works with manufacturers across the world to close-the-loop by replacing virgin plastics with MBA plastics in their new products.

As of now, the organization is working on its first plastic repurposing center, slated to open in Lima, Peru next year. The organization has partnerships that will cover a large amount of the local start up costs, including the facility costs, during the pilot.

But before they can open their doors and accept the first deposit of plastic waste, they need to build the software platform that will facilitate the entire process. This is why the organization launched a crowdfunding campaign on IndieGoGo to help with additional costs.

The organization is also looking for other partners as well.

Katz hopes that corporations that use recycled plastic in products will instead use what he calls "social plastic."

"The more people demand a preference for products made from recycled social plastic, companies will start to meet that demand," he said. "The importance of social plastic over other recycled material is that it's helping the world ascend from poverty. It's a great business model."

"There's no question I will change the world," he said. "Something that can't be done, I've always figured out how it can be done. That's ultimately what I do."