Extrusion Basics: The Taming of the Screw 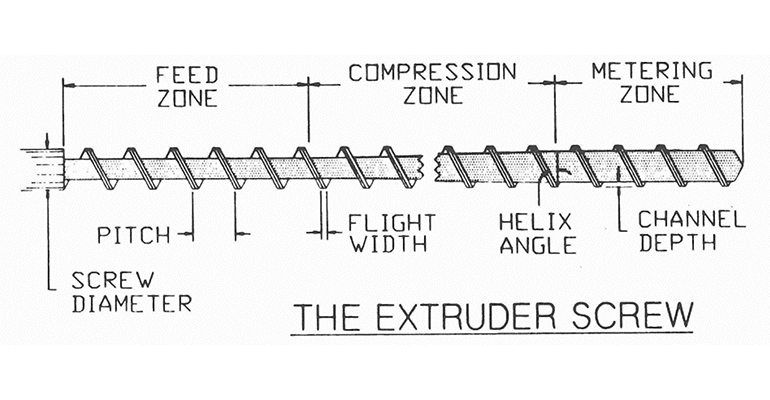 The screw is at the core of the extrusion process. This article summarizes how it works and details the importance of length-to-diameter ratio, channel depth, flight width, and other parameters.

Planet Earth is spinning at a rate of 0.0007 rpm. Easy to calculate: One revolution per day, divided by 24 to get revs/hr and then by 60 to get revs/min = rpm. As for linear speed, it depends on where you live. In Northern California where I am, it’s 38 north latitude and we’re moving around 730 miles per hour. That’s around the speed of sound but we don’t feel or hear it as the air around us is moving just as fast. It’s much faster than inside any extruder — in a 12-in./30-cm barrel, running fast at 100 rpm, a particle at the barrel wall still reaches only 314 ft/min, or 0.36 miles per hour. None of this is important in running an extruder, but to us engineers, it’s fun.

It is important, however, to understand how a screw works. Here’s a condensed version of the section on single screws in my Plastics Extrusion Operating Manual (24th edition, 2021).

We express the length of the system as length-to-diameter ratio (L/D). The most common L/D is around 24:1; some are longer at 30:1 or even more, and a few are as short as 20:1. More length may mean more output if heating, melting, or mixing are output limits

A standard screw has three zones:

Many screws are square pitch, which means that the distance from one flight to the next is the same as the diameter. This makes it easy to get L/D just by counting turns. The portion under the feed opening should not be included in L/D but many people do count as it makes the screw appear longer.

Flight width (thickness) is around 10% of barrel diameter. Wider flights waste screw length and develop too much heat in the clearances to the barrel wall, while narrow flights may allow too much flow (leakage) in those clearances. To avoid stagnation where the flight meets the root, corners are rounded

Screws are usually machinable steel, but the flight surfaces closest to the barrel are further treated to delay wear. For light use, flame-hardening is enough. The entire screw surface can be hardened by nitriding, but the usual treatment is a cap of hard alloy on these flight surfaces.

Barrels are steel cylinders usually lined with a wear-resistant alloy.

The clearance between the screw flights and the barrel on new screws is between 0.005 and 0.010 in. (0.125 to 0.25 mm), less for very small screws and more for very big ones. A tighter fit would be more costly to make and develop too much heat. Some wear beyond these values is usually harmless, and may even be helpful, so be sure there is a real problem before rebuilding or replacing (such as overheating because the screw must run faster for the same output).

Screws can be designed by computer if we know resistance (pressure at screw tip), desired output rate, and material viscosities, but it is still a good idea to “season” the computer with some experience before cutting metal.

Chrome-plating a screw may increase slip on the root (which is good) and prevents corrosion, especially when out of the machine, but is unnecessary for most plastics. For highly abrasive materials, the entire screw surface can be hardened. Finally, PVDC and some fluoroplastics need special metals, as iron-based materials corrode and plating doesn't last long enough.

Some screws are bored with a central passage. Water-cooling the entire length improves mixing in the last flights. Oil is used with rigid PVC to hold the screw tip around 300°F (150°C), so the PVC doesn't degrade there. Screw cooling only partway down the barrel is done with some plastics to prevent sticking to the screw root in the feed zone.

A Maddock section is a length of screw around two diameters long, normally found just a few turns before the end, with large grooves (called flutes) in pairs instead of flights.

Each inlet flute has a corresponding outlet, with a barrier ridge between them (see drawing below). The clearance to the barrel over this ridge is around 0.020 to 0.030 in. (0.50 to 0.75 mm). The first Maddocks had flutes parallel to the screw axis but now more are helical.

The melt enters the inlet flutes, flows over the barrier ridge, and leaves through the outlets. Unmelted pellets can't pass over whole, but are sheared and flattened and finally pass over as melt. Also, the cooler melt stays in the high-shear area longer than hotter melt, providing more thermal uniformity. It is often called a Maddock mixing head, but is seldom at the end (head) of the screw, and is more a strainer than a mixer.

A barrier screw has a section that occupies most of the compression zone, with an extra flight that forms two parallel channels — one for melt and one for pellets. Clearance between the new flight and barrel is big enough that melt formed in the pellet channel can flow backward into the melt channel, but small enough to block the pellets, which are about 0.060 in. (1.5 mm). The pellets stay in their main channel, but are drained of excess melt and, thus, generate more frictional heat as they rub against one another. Consequently, melting is more efficient per rpm. As material moves down the screw, more melt is produced so the melt channel grows in volume. The pellet channel, however, gets smaller as fewer pellets remain unmelted, until the section finally ends, the pellets are gone, and a single flight carries the melt away through the metering zone. It is common to combine such a barrier with a Maddock section in the metering zone, or another special mixing device.

The barrier section in the drawing is only 4 diameters long, but this is shortened for clarity; the usual length is at least 10 diameters.

Mixing pins are rings of studs projecting from the screw root to disrupt streamlined flow like rocks in a stream, thus improving mixing. They usually are put in the last quarter of the screw.

Grooved barrels have axial or helical grooves in the barrel, in a water-cooled separate feed zone, to improve intake of slippery, hard plastics like high-density polyethylene. A screw with a shallower feed and deeper metering zone is needed, often with no compression at all. Because a deep metering zone gives poor mixing, further hardware is needed, either an intensive mixing section at the output end of the screw or a static mixer in the head.

For vented (two-stage) extrusion, a very long screw is used, as all material must be melted before the vent, which is typically at around 70% of total length. This first portion is a normal three-zone screw, but then it suddenly gets deep again, reducing melt pressure so a vacuum can be applied through a hole in the barrel (the vent) to draw off air, moisture, or other volatiles. Melt continues downstream, is recompressed, goes through a final metering and mixing section, and then leaves through the die.

Materials can be added through the vent hole, such as foaming gases and agents, scrap, blending resin, and micro-additives. Even non-thermoplastics can be inserted, such as glass fiber, which doesn't have to melt and is much less abrasive when added to molten material rather than mixed with hard, solid feed particles.

In a vented screw, the second stage must take away what the first (rear) stage puts into the vent zone, and must also work against the head resistance. Therefore, the pumping capacity of the second stage must be greater than the capacity of the first stage, which works against zero resistance — or else the feed must be separately controlled — to avoid melted plastic coming out of the vent. The usual ratio of front:rear metering depths is between 1.5 and 2.0. However, deep channels can't pump well against high pressure, so a typical vented screw can only work against a maximum resistance (including screens) of around 2500 psi (17 MPa). For higher head resistance, either controlled feed or a gear pump is needed to allow venting.

Double-flighted screws have two parallel paths in part or all of the screw. In the metering zone, this helps heat transfer, so it is sometimes used where very high temperatures are needed, such as extrusion coating. A double-flighted feed zone is believed to give smoother feed (less pulsation) but is seldom seen today. All barrier screws are double-flighted in their barrier sections, but the two paths are not equal, as explained above. In a wave screw, the two (or three) paths are equal width, but there is a barrier between them low enough for melt to flow over. The channel depths have wave-like increases and decreases, out of phase with each other, so when one path is shallow, the path across the barrier is deep and melt flows from the shallow to the deep. Half a turn later, the depths are the reverse. Melt still flows from the shallow to the deep, so it moves back and forth across the barrier as it goes downstream, which is good for mixing and stabilizes the flow.

No live seminars planned in the near future, or maybe ever, as his virtual audiovisual seminar is even better than live, says Griff. No travel, no waiting for live dates, same PowerPoint slides but with audio explanations and a written guide. Watch at your own pace; group attendance is offered for a single price, including the right to ask questions and get thorough answers by e-mail. Call 301/758-7788 or e-mail algriff@griffex.com for more info.

Talent Talk: Why It Seems Like Top Talent Is So Expensive These Days
Oct 11, 2021