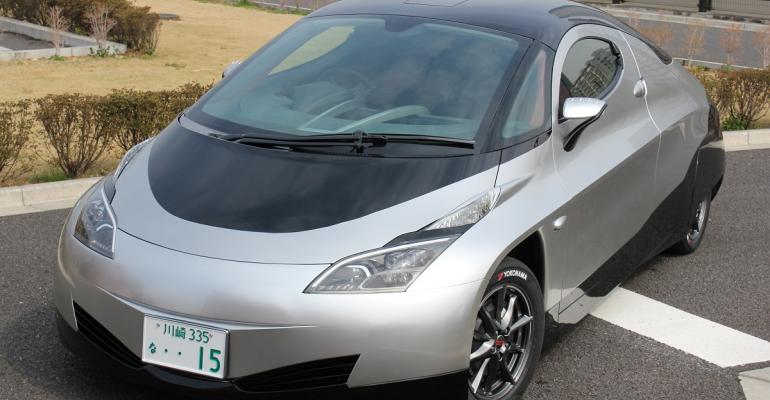 The latest prototype electric vehicle (EV) from SIM-Drive Corp. (Kawasaki City, Japan) employs two types of polyamide supplied by DSM Engineering Plastics (Singapore). The SIM-CEL is a high-performance EV that boasts a range of almost 325 km on a single charge and it can accelerate from 0 to 100 km/h in just 4.2 seconds.

The latest prototype electric vehicle (EV) from SIM-Drive Corp. (Kawasaki City, Japan) employs two types of polyamide supplied by DSM Engineering Plastics (Singapore). The SIM-CEL is a high-performance EV that boasts a range of almost 325 km on a single charge and it can accelerate from 0 to 100 km/h in just 4.2 seconds.

This outstanding performance is in part due to lightweighting technologies developed in collaboration with DSM and others. DSM contributed to the development of three parts for the SIM-CEL: a body panel in its EcoPaXX polyamide 410; a wheel cover center cap in the same material; and a heat sink for highly energy-efficient LED headlights in Stanyl TC polyamide 46. EcoPaXX polyamide 410 is 70% resourced from the castor plant. It is certified 100% carbon neutral from cradle to gate.

Kees Tintel, who was responsible for development of EcoPaXX at DSM, says the new grade contributes to weight reduction in the SIM-CEL by replacing metal; the part is in fact at least 50% lighter than a metal version. EcoPaXXs very good flow properties provide an excellent surface finish, and it has the necessary high temperature resistance to enable inline painting along with the rest of the vehicle. Unlike some other polyamides, it absorbs little water, and therefor has a very good dimensional stability. It also has sufficient elasticity to enable assembly with snap fits.

In order to improve overall aerodynamics, the SIM-CEL incorporates spats, or fender skirts, which cover the rear wheel arches. These are also made in DSM's EcoPaXX polyamide 410, further contributing to the sustainability of the car, its low weight and its good aesthetics.

"Heat sinks are normally made in aluminum," says Kenji Nishita, responsible for the development project at DSM. "Aluminum does have a much higher thermal conductivity than Stanyl-160 W/mK-but an all-aluminum heat sink would be over 25% heavier than the version on the SIM-CEL, which is a hybrid of Stanyl TC551 and aluminum. This hybrid shows practicable heat dissipation because aluminum and Stanyl have role sharing optimally. The design of the part was critical. Stanyl TC has very good flow, which enabled us to design a part with thin walls and a high surface-to-volume ratio to get very good heat dissipation."

Development of the SIM-CEL, which took around one year, involved close collaboration with 26 outside organizations, including DSM. DSM personnel were located at SIM-Drive's development center on a full-time basis, and were actively involved in the prototyping process.