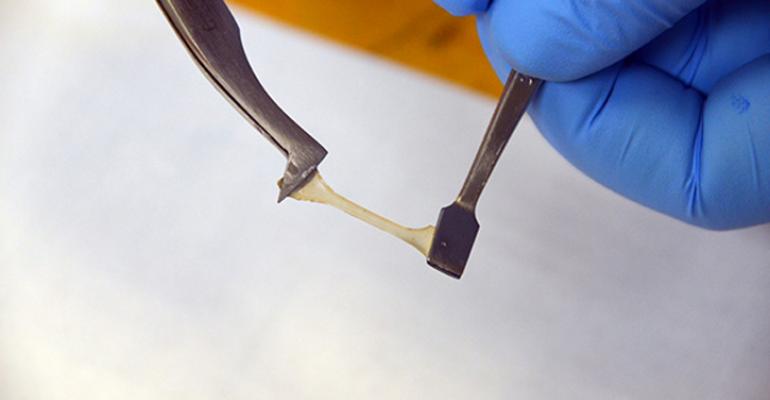 An inexpensive resorbable polymer that could replace far more costly medical materials in current use, a sensor-laced plastic that stretches and feels like human skin and could give users of prosthetics a sense of touch, and a squid-based thermoplastic are among recent research projects that could have a far-reaching impact on medical technology in the years ahead.

An inexpensive resorbable polymer that could replace far more costly medical materials in current use, a sensor-laced plastic that stretches and feels like human skin and could give users of prosthetics a sense of touch, and a squid-based thermoplastic are among recent research projects that could have a far-reaching impact on medical technology in the years ahead.

Polyurea, a material that is stable in aqueous environments, is typically used in paints, caulking, and adhesives. With a bit of chemical ingenuity, it may also have medical applications. Researchers at the University of Illinois at Urbana-Champaign have succeeded in reversing the material's aqua-stable property to make it hydrolyzable, or transiently stable in aqueous solutions. It can be engineered to degrade over a period of time, making it potentially suitable for a number of bioresorbable applications in drug delivery systems, sutures, and tissue regeneration scaffolds.

Jianjun Cheng, Associate Professor, materials science and engineering, and his team of researchers have developed a class of hindered urea bond-containing polymeric materials, or polyhindered ureas (PHUs), that can be completely hydrolyzed within a few days. A paper published in the Journal of American Chemical Society demonstrates the potential of PHUs for the design of water-degradable polymeric materials that can be easily synthesized by mixing multifunctional bulky amines and isocyanates, expanding the family of hydrolyzable polymers, according to a press release from the university.

While bioresorbable polymers have been in use for some time in medical applications, the new PHUs have a significant cost advantage over existing materials. "PHUs can be made with inexpensive chemical precursors in ambient conditions via simple and clean chemistry with no catalyst or by-products, making it possible for end users to control the copolymer recipe for specific use without the need of complicated synthesis apparatus," according to the press release.

Do it again, with feeling
The first bionic arm approved by FDA, the DEKA "Luke" Arm, is precise enough to eat with chopsticks, reports the smithsonian.com, but it doesn't communicate with the brain in the way real skin does. For example, it can't tell if that pizza is going to burn the roof of your mouth. MC10, a startup based in Cambridge, MA, that PlasticsToday featured in its article on cool wearable devices, collaborating with researchers from Seoul National University, has a potential solution: a sensor-embedded polymer designed to cover prosthetic devices that would give users a sense of touch.

The elastomer reportedly stretches and feels like real human skin and includes up to 400 sensors per square millimeter that can detect temperature, humidity, pressure, and physical strain. So far, so good, but the researchers still need to figure out a way to connect the artificial skin to the central nervous system and transmit those sensations to the user of the prosthetic device. Thus far, the researchers have successfully shown that the skin can trigger a rat's sensory cortex, reports smithsonian.com, but it can't tell which senses are being triggered.

And, from rodents we move on to squids. The source material for calamari also, apparently, may be able to provide a 3D-printable thermoplastic. Melik C. Demirel, Professor, engineering science and mechanics, at Penn State, and his team have synthesized proteins from the genetic sequence of the European common squid to formulate a thermoplastic that can be extruded, molded, or cast. The material can be used in 3D printing systems to build complex geomtries.

The protein complex that exists in the squid ring teeth (SRT) is a natural thermoplastic. The researchers used recombinant techniques to produce a small SRT molecule and inserted the SRT protein genes into E. coli, so that the bacteria could produce the plastic molecules as part of their normal activity. The thermoplastic was then harvested from the media where the E. coli lived.

The semi-crystalline material can be rigid or soft, has a high tensile strength, and will adhere to wet surfaces, reports phys.org.

"This thermoplastic protein has a variety of tunable properties, which can be adjusted to individual requirements of manufacturing," writes phys.org, and because it is a protein, it can be used for medical or cosmetic applications.