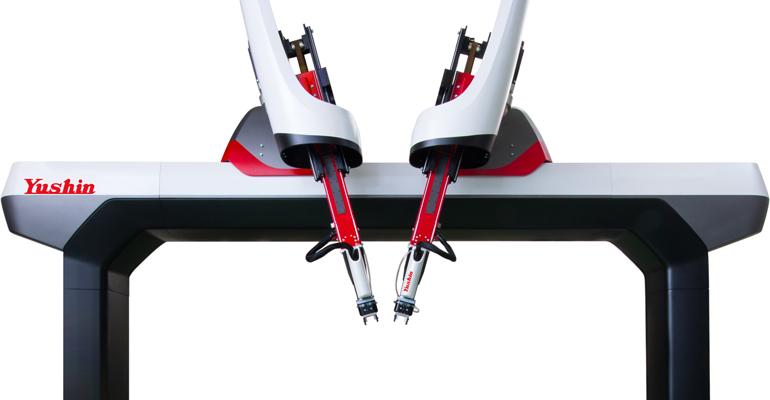 No matter where you looked on the NPE trade show floor, automation was present, either at stand-alone displays or working with molding and thermoforming machinery in live demonstrations.

As the demand for automation heats up among processors, both injection molders and thermoformers, the latest innovations from CBW Automation (Fort Collins, CO ) drew big crowds at NPE. The revolutionary new concept for roll-fed labels provides ease of handling for the molder. After the labels are printed, they are rolled up and sent to CBW, where the company's roller die perforates the labels. "We never completely cut the label out—we perforate, then put it in the mold. The die cutting is performed in-line at the printer's facility. Most roll-to-roll label printers have in-line die cutting, so this is a very common operation for them and doesn't add any real cost or lead time to the label," said Robert Harvey, Vice President of Sales & Marketing for CBW. The new CBW Automation roll-fed perforated labels offer higher productivity and better quality label placement.

Among the visitors to CBW's booth was Bob Travis, President of inkWorks Printing LLC, who commented that this new technology developed by CBW is a "game changer." While Travis noted that he's not certain that people fully understand the implications of just how much this technology will provide real added value to the IML process, he noted that its benefits were evident at the demonstration at CBW's booth.

"Stacking pre-cut labels in a magazine is a non-value added process," Travis explained. "Press-side cutting got rid of the stack, but this next iteration CBW has developed has taken the work out of label placement for the molder and provides real value."

In honor of its 45 years of developing automation systems for the injection molding and thermoforming industries, CBW showcased other custom automation products. The debut of the new SSE Robot was demonstrated in cooperation with injection molding machinery manufacturer Engel, where it ran a 2-x-4 thin-wall mold built by StackTeck Systems Ltd., molding a 1.5-L container in a 720-ton e-Speed machine with a CBW SSE high speed side-entry robot with a retrieval time of less than one second.

"The SSE is CBW's most technologically advanced robot available to date and combines CBW's fundamental speed advantage of high-flow vacuum technology with the additional flexibility afforded by a robot strip stroke," said Harvey. "Strip-stroke capability allows us to capture more complex part geometries as well as follow the ejection stroke of the mold while the part is contained in the robot.

"High-flow vacuum part capture optimizes productivity with an intrusion time capability of less than 0.5 seconds. Additionally, the SSE robot can recognize that the vacuum has been achieved in as few as 60 milliseconds," Harvey explained.

Yushin (Cranston, RI) pooled its four decades of experience in the fields of industrial automation and robotics to create what the company called an "exceptional Cartesian full-servo robot." Unveiled to attendees at NPE 2015, this robot captivated the crowds that studied the cooperative and collaborative motions of the 16 servo axes.

Designed to work in conjunction with a standard take-out robot or as a stand-alone product, this unique design is suited for assembly, packaging and other secondary operations. The dual arms are angled toward each other to maximize the robot's cooperative abilities and somewhat mimic human arms for task collaboration. Strokes and payloads can be configured to match any combination of the many configurations of Yushin's standard robots.

The single controller offers synchronous cooperative axes of motion, including full integration with auxiliary downstream equipment. Each axis can be programmed to function independently or in a combination of axes. Users will find its intuitive structure a welcome change from the complex challenges of articulated robots, noted Yushin. Abilities of this robot range from increasing the overall payload capacity of each arm, by working as a pair to lift and manipulate heavy objects, to eliminating the need for stationary, dedicated nests by permitting on-the-fly hand offs.

Sepro America LLC (Warrendale, PA ) made a big announcement with its Sepro robots for molding machines with 800 to 5000 tons of clamping capacity. The company demonstrated a model 7X45 five-axis robot from the premium 7X Line. At the same time, Sepro announced two 3-axis families of big robots, the technological S7 Line, and the Strong line of universal robots.

"The new large robots complete the transformation of the full Sepro product line, which we began in 2008," explained Jean-Michel Renaudeau, CEO of the Sepro Group (La Roche-sur-Yon, France). "Over the last six years—since NPE 2009 and the depths of the financial crisis—we have completely redesigned our portfolio to deliver all-servo robots that are faster and more powerful, with longer strokes and larger payloads than previous generations. We've added 5- and 6-axis products in all size ranges, in-mold labeling solutions, a dual-arm unit, a servo sprue picker and new, user-friendly controls," said Renaudeau.

Jim Healy, Vice President, Sales & Marketing, acknowledged that the plastics industry overall has been bullish since 2011. "There's no doubt that was a big part of our success in 2014, during which time we booked €79.2 million in global sales," Healy said. "The automotive industry has been particularly dynamic and, with Sepro's traditional strength in big robots, that means business for us. However, the growth has really been more broad-based than that. We've seen continued strength in medical and packaging segments in the west and southeast U.S. And we've been growing market share, especially in smaller robots."

Sepro displayed and demonstrated a total of 19 robots at NPE, including those connected to molding machines in the booths of Sumitomo Demag, Absolute Haitian, G. Pernoud North America (with Billion), Stork, and Maruka U.S.A/Toyo.

"We like to talk about offering our customers ‘your free choice in robots,'" said Healy. "What we mean by this is that no matter what the application, no matter where you are in the world, regardless of the brands of molding machines you run, or whether you are automating a new machine or an existing one, Sepro has a solution to suit your needs. Having one of the broadest product offerings in the industry is definitely an advantage and we see it paying off."