Beyond K 2022: Finding Some R&R In and Around Düsseldorf 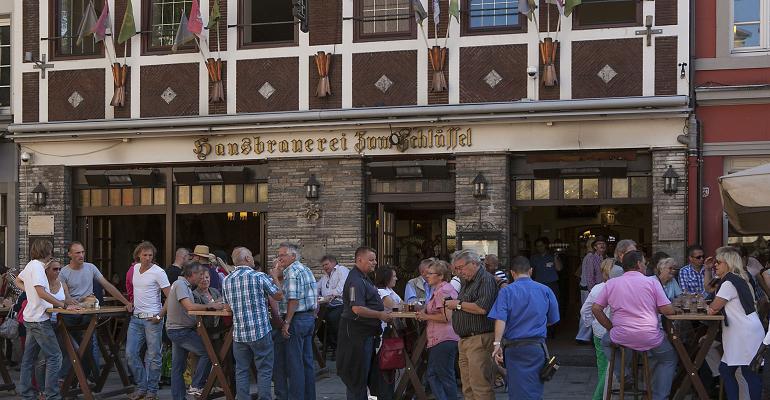 Is hanging around the Altstadt getting, well, old? Here are some other après-show activities to consider.

There’s no getting around it: For trade-show attendees in Düsseldorf, all roads lead to the Altstadt. The “longest bar in the world,” as guidebooks like to say, bursts at the seams with restaurants, drinking establishments and all manner of louche hangouts. Its charm is undeniable, but with a weeklong event like the K, you might find yourself hankering for a change of scenery and culinary diversity. Some options worth considering follow, but let’s stay in the Altstadt for just a moment.

Every type of cuisine imaginable can be found within the cobble-stoned confines of the Altstadt, but, truth be told, the quality is very much hit and miss. That won’t be an issue at the Weinhaus Tante Anna (Andreasstr. 2), an oasis of refinement amid these raucous environs. The restaurant’s fine cuisine is complemented by an impressive wine list, and it is housed in a historical and quite beautiful building dating from the early 1800s. During trade shows, it’s imperative to make a reservation well in advance. Also be prepared to spend a fair amount of time at the table (that’s where the wine selection comes in handy).

More in line with the general Altstadt ambiance, the Killepitsch bar (Flingerstr. 1) is worth a shot (or two, or three). A liqueur based on herbs and spices (and boasting 42% alcohol volume), Killepitsch tastes nasty from the first shot to the last, but by the third round, you won’t much care. The place is tiny, but there is plenty of room outside. Fittingly, you order the drinks through a hole in the wall. It’s a Düsseldorf tradition, and the libation is not easily found elsewhere, not even in Germany.

Formerly the warehouse district, this once shabby part of town has turned trendy with some stunning modern architecture by the likes of Frank Gehry. Au courant eateries line the streets and the overall atmosphere is one of sophistication. Be forewarned: the Medienhafen district has become quite popular in its own right and you would be well advised to make reservations. Here are some restaurants that get high marks on TripAdvisor:

A river runs through it

You may see the fabled Rhine river by crossing one of the many bridges. It has not been immune to climate change — at times, the water level has been too low for the popular river cruises — but it remains evocative. The Rhine is famous in history and legend, bisecting the Latin world (France) and the Germanic world (Germany/Netherlands) — it is the artery and vein that supplies and receives from the interior.
Wagner’s “Ring” operas start here — his Nibelungen were dwarves who were custodians of the Rheingold treasure (it’s not just an old New York beer). Other versions of the treasure legend go into dark-ages France and western Germany. There are Rhine maidens, the Lorelei, and lots of castles along the river, should you go for the cruise or go by car.

You may also want to take a shorter trip down the Rhine to Cologne (aka Köln) to gaze at the majestic cathedral and engage in some postwar history. Konrad Adenauer, the first postwar Chancellor of Germany, came from here, as did the Wittmers, a couple who left it all in 1932 to live in the Galapagos.

While in Cologne, try the Kölsch beer, which is quite different from the Altbier that is ubiquitous in the Düsseldorf area. Kölsch is a lighter and brighter brew, while Altbier is darker and more serious-minded. Both are served in the traditional small glasses, and the alcohol content is similar, around 5%.

A bit of beer history: Altbier is called that because it uses an older brew method, where the yeast floats on top of the liquid rather than at the bottom. (Kölsch has top yeast, too, but takes its name from the city of Köln.)

Even if you hang around Düsseldorf, you can find a quiet place to contemplate the Rhine by going north from the show to Kaiserswerth — the trolley from the north gate will get you there in 10 to 15 minutes — and walking west to the bank. In the early evening, with the usual mist and fog (if not drizzle), it’s a mystical experience.

Another short trip worth taking when you’ve got some downtime at the show is to Neanderthal (Neander Valley) in Mettmann, 15 miles east of the city, where human-like bones and artifacts were discovered in 1856. It’s usually believed that this was an evolutionary path that died out. Neanderthals have been discovered elsewhere, but you can still see the original cave and models of what we think they looked like in the Neanderthal Museum.

Aficionados of classical music may know that Felix Mendelssohn worked in Düsseldorf for several years as music director. His statue can be seen near the opera house (though he didn’t write operas); it was re-erected in 2012 to replace the one the Nazis took down and destroyed in 1936. Robert Schumann lived here, too, at Bilkerstrasse 15, just south of Zum Schiffchen (Hafenstr. 5), a typical restaurant in the Altstadt well worth visiting even with the show crowd. (It’s one of the oldest in town, and reportedly once served Napoleon.) In his later and more mentally unstable years, Schumann jumped into the Rhine (1854, around where the Kniebrücke is today) but was fished out by fishermen and sent to an asylum, where he died two years later. Both he and Clara are buried in Bonn, just down the river and the birthplace of Beethoven.

If you have the time, Aachen is just 50 miles southwest of Düsseldorf. You can pay your respects to the German Plastics Processing Institute, which is located here. Don’t miss the cathedral, which houses the tomb of Charlemagne, and the city hall, which dates to before 1000 AD. Fifty statues of German rulers adorn the north facade; 31 of those kings were crowned at the cathedral. Considered to be one of the most famous examples of occidental architecture, the cathedral was the first German building to be included in the UNESCO World Heritage list in 1978.

The castles of Augustusburg and Falkenlust in the town of Brühl, also designated a UNESCO World Heritage site, are a short 45-minute train ride from Düsseldorf. They are considered to be among the earliest and best examples of 18th century rococo architecture in Germany. Brühl is also the birthplace of Surrealist artist Max Ernst. A museum, the only one in the world exclusively devoted to the artist, celebrates his life and work.

We saved the wurst for last
Our last suggestion is to visit any large German supermarket, especially in the suburbs where they are bigger. It’s a free insight into the objects of German daily life. Of course, don’t miss the wurst (sausage) selection, guaranteed to bring carnivores to their knees.

Have you discovered some hidden gems in the Düsseldorf area that you would like to share with PlasticsToday readers? Tell us in the comments box.