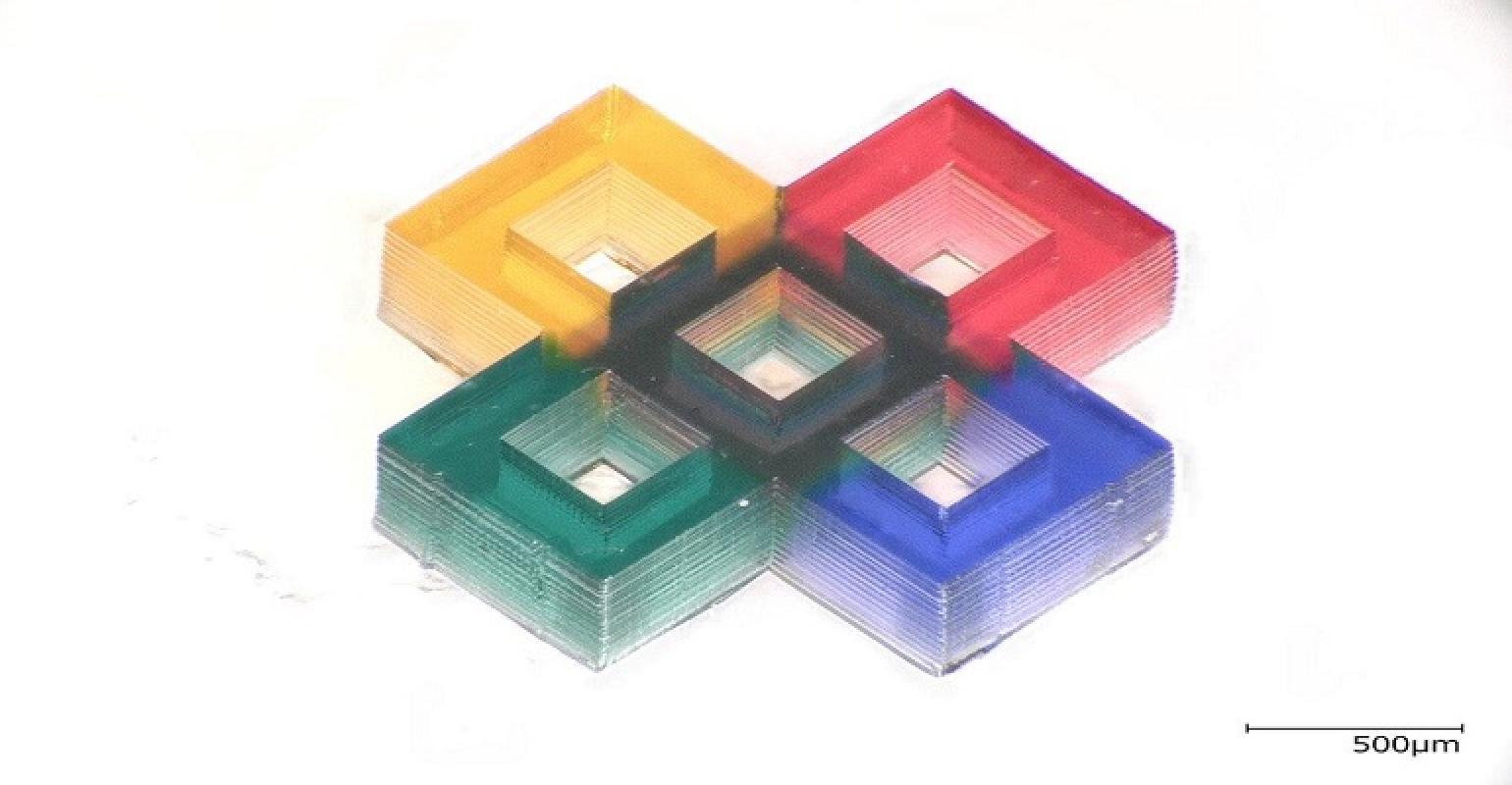 By adjusting the number of layers of multicolor resins, the researchers could adjust the light absorbance for each part of a structure. This allowed them to create black in microstructures such as this cross shape by combining layers of red, blue, green, and yellow.
3D printing technique developed by researchers in Japan eyed for developing optical, soft-robot, or medical components.

A new method developed by researchers in Japan has solved the tricky problem of successfully 3D printing multicolor and multi-material microstructures in a single-step method.

The technique—invented by a team from Yokohama National University in Japan—is based on a new way to hold the various materials in a droplet state, so there is less waste when they are exchanged in a closed space such as a printer microchannel, researchers said.

Key to allowing this to work is the unique way the team created for the process to work with the different materials, research team leader Shoji Maruo from the university, told Design News.

“In our study, by installing a palette with multiple resins placed on a translational motorized stage—and additionally installing two cleaning tanks and one air blow nozzle—all processes including 3D printing, resin replacement, bubble removal, and cleaning processes are sequentially carried out using a lab-made software,” Maruo told us. “As a result, multi-color 3D microstructures could be created automatically.”

Researchers envision the process can be used to develop a variety of optical components, such as optical sensors and light-driven actuators, as well as to fabricate multi-material structures for applications such as soft robotics and medical applications.

Typically, a type of additive manufacturing called stereolithography is used to create high-precision 3D structures by using a laser to harden light-activated materials known as photocurable resins in a layer-by-layer structure.

One challenge with this process has been to keep the different resins from contaminating each other when switching materials without creating large amounts of waste or forming air bubbles in the printed object. Current methods use microfluidics to hold the liquid resins, but this is not always successful, researchers said.

The process developed by Maruo’s team eliminates the problem of air bubbles by “translating the 3D printed model in the resin,” he told us.

“In addition, in order to prevent cross-contamination of resins completely, a two-step cleaning process is introduced when the resins are changed,” Maruo told Design News. “Owing to these improvements, both the contamination of resins and mixing of air bubbles were suppressed, and the multicolor 3D structures could be created successfully.”

Researchers published a paper on their work in the journal Optical Materials Express.

Researchers tested their approach by placing various types of photocurable resins in a palette and using them to create 3D microstructures. One of the structures was a tiny multicolor cube just 1.5 millimeters across; to create this, the system exchanged five colors of resin 250 times during a six-hour fabrication process.

The team also demonstrated that by adjusting the number of layers of multicolor resins, they could also adjust absorbance of each part of the structure, allowing them to create microstructures with colors such as black by combining layers of red, blue, green, and yellow.

“The color can be controlled by changing the number of layers of each color resin as shown in the black part of the cross-shaped model,” Maruo told us. The method also can be applied not only to multicolor resins but also to a wider variety of materials, he added.

“For example, mixing various ceramic micro- or nanoparticles with a photocurable resin can be used to 3D print various types of glass,” Maruo said. “It could also be used with biocompatible ceramic materials to create scaffolds for regenerating bones and teeth.”

The team plans to continue its work by shortening the time required for processes such as resin replacement and bubble removal to pave the way for the system to fabricate structures more quickly. They also plan to use their prototype and demonstration to build a multi-scale fabrication system.