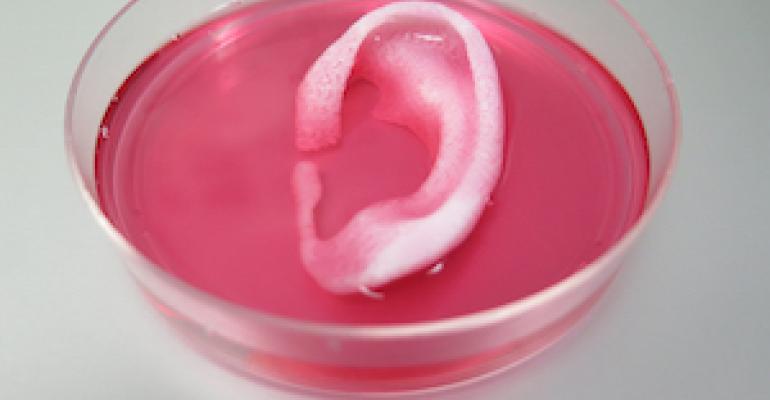 While most everyone agrees that replacement body parts fabricated with living cells in 3D-printed structures will one day be a reality, the conventional wisdom is that it's many, many years away. The problem with conventional wisdom, however, is that it is predicated on a linear model of progression and doesn't take into account the accelerating power of technology.

While most everyone agrees that replacement body parts fabricated with living cells in 3D-printed structures will one day be a reality, the conventional wisdom is that it's many, many years away. The problem with conventional wisdom, however, is that it is predicated on a linear model of progression and doesn't take into account the accelerating power of technology. Futurist Ray Kurzweil stressed that phenomenon—the exponential nature of technological change—during a keynote presentation at the co-located MD&M West and PLASTEC West events in Anaheim last week. He wasn't speaking about 3D printing, but he might as well have been. Those 3D-printed body parts? They might be closer than you think, thanks to researchers at Wake Forest Baptist Medical Center (Winston-Salem, NC) and exponential progress.

Using a custom 3D printer, regenerative medicine scientists at Wake Forest Baptist Medical Center have proved that it is feasible to print living tissue structures to replace injured or diseased tissue in patients. As reported in Nature Biotechnology, the scientists have printed ear, bone and muscle structures and implanted them in animals, where they matured into functional tissue and developed a system of blood vessels. The structures have the right size, strength and function for use in humans, according to the researchers.

"This novel tissue and organ printer is an important advance in our quest to make replacement tissue for patients," said Anthony Atala, MD, director of the Wake Forest Institute for Regenerative Medicine (WFIRM) and senior author of the study. "It can fabricate stable, human-scale tissue of any shape. With further development, this technology could potentially be used to print living tissue and organ structures for surgical implantation."

Developed over a 10-year period at WFIRM, the Integrated Tissue and Organ Printing System (ITOP) deposits both bio-degradable, plastic-like materials to form the tissue "shape" and water-based gels that contain the cells. In addition, a strong, temporary outer structure is formed. The printing process does not harm the cells.

A major challenge of tissue engineering is ensuring that implanted structures live long enough to integrate with the body. The Wake Forest Baptist scientists addressed this in two ways. They optimized the water-based "ink" that holds the cells and promotes cell health and growth, and they printed a lattice of micro-channels throughout the structures. These channels allow nutrients and oxygen from the body to diffuse into the structures and keep them alive while they develop a system of blood vessels. In the WFIRM studies, a baby-sized, 1.5-inch ear structure survived and showed signs of vascularization at one and two months after implantation.

"Our results indicate that the bio-ink combined with the micro-channels provides the right environment to keep the cells alive and to support cell and tissue growth," said Atala.

Another advantage of the ITOP system is its ability to use data from CT and MRI scans to "tailor-make" tissue for patients. The system could print a matching structure for a patient missing an ear, for example.

It seems to come straight out of the Island of Dr. Moreau, but the researchers were able to 3D-print human-sized external ears that were implanted under the skin of mice. Two months later, the shape of the implanted ear was well-maintained and cartilage tissue and blood vessels had formed.

To demonstrate the ITOP can generate organized soft tissue structures, printed muscle tissue was implanted in rats. After two weeks, tests confirmed that the muscle was robust enough to maintain its structural characteristics, become vascularized and induce nerve formation.

They were also able to print jaw bone fragments that were the size and shape needed for human facial reconstruction using human stem cells. To study the maturation of bioprinted bone in the body, printed segments of skull bone were implanted in rats. After five months, the bioprinted structures had formed vascularized bone tissue.

It's early days for this research, and studies are underway to measure longer-term outcomes. But given Kurzweil's law of accelerating returns—"we won't experience 100 years of progress in the 21st century; it will be more like 20,000 years of progress at today's rate"—it might not be that long, after all, before 3D-printed biological implants are commonplace.

WFIRM's research was supported, in part, by grants from the Armed Forces Institute of Regenerative Medicine, the Telemedicine and Advanced Technology Research Center at the U.S. Army Medical Research and Material Command and the Defense Threat Reduction Agency. The federally funded effort seeks to apply regenerative medicine to battlefield injuries.