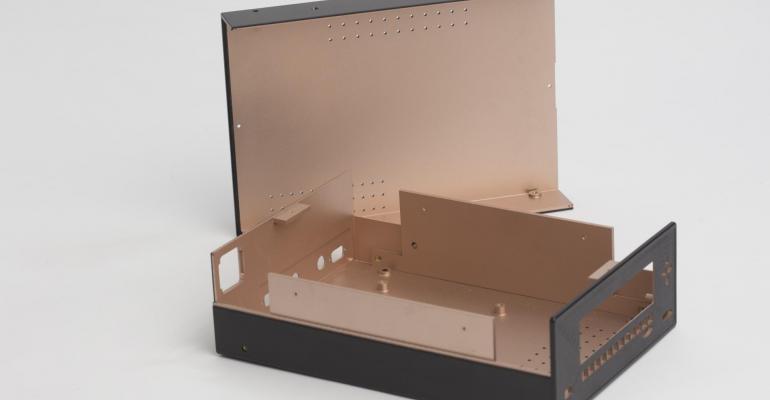 A Minnesota plastics fabricating company is taking a few pages out of the metals, and even wood assembly, playbooks to make plastics enclosures that fill a rapidly growing niche for low-volume applications, particularly in the medical market.

A Minnesota plastics fabricating company is taking a few pages out of the metals, and even wood assembly, playbooks to make plastics enclosures that fill a rapidly growing niche for low-volume applications, particularly in the medical market.

Envision Plastics and Design, a 13-year-old spinoff from a company specializing in sheet metal fabrication,

The company uses milling, sawing, faceting, bending, and bonding processes to create enclosures from specially ordered sheet from partner suppliers such as Spartech, Allen and Boltaron. Part of the company's secret sauce is in a proprietary CNC bending process that allows for multiple angle bends and tight tolerances on formed angles.  Tight tolerances are key to locating other assembled components into the plastic housings such as mounting standoffs, snap-fit tongue and groove features and PCB grooves.

In an interview with Plastics Today, Brian DuFresne of the company's management and ownership team said the processing technology was originally licensed in 2000 from a European company.

"We have consistently grown 10% a year and add about 25 new customers annually," DuFresne said. Some of the company's jobs may originally have been designed for sheet metal, but the customer prefers to use plastic for aesthetic reasons, DuFresne said.

The NMR approach also works well for designs that are not complex, and may require design changes after going out into the field. It also works well if customers need a rapid launch, and don't want to wait one to three months for a tool to be built. Or, the customer may want to avoid the cost of a tool.

"Medical is a good fit for us because production volumes are typically low," DuFresne said. About 40% of the company's business is in the medical field. Envision Plastics and Design is owned by its executive management, and has about 10 full-time employees. Manufacturing takes place in a 7,000 s.f. facility in White Bear Lake, MN, in the Twin Cities area.

Production runs go from about five to as many as 5,000. "We don't want to be seen as a prototype house," DuFresne said. "If someone just wants to build five to 25 units, that's fine with us though. We consider 25 to 100 to be a good quantity. " If a customer wants to transition to very large-scale production, then the project may go to an injection molder or thermoformer.