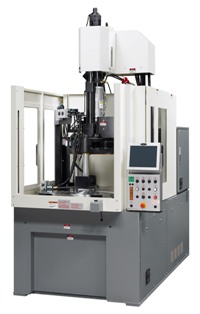 Its servomotor-driven pump permits low-flow volume control, and feedback control is capable of precisely controlling the velocity setting below 1 mm/sec. In addition, controllability and stability in the ultra-low pressure range have been improved significantly, which are ideal for thick-wall product and hot melt (low-pressure encapsulation) moldings, according to Nissei.

The TNX Series is equipped with a three-tiebar-wide turntable, and the maximum mold dimensions mountable are said to be the largest in industry (up to 20% larger than predecessors). Nissei has sold about 10,000 vertical injection molding machines in its history and plans to target annual sales of 150 units for TNX machines. Target applications include tactile switches for electrical/electronic parts, narrow pitch connectors for mobile devices, mesh filters for automobiles and LED bases and reflectors. —[email protected]