Recently, I received an email from a reader urging me to devote more attention to what he referred to as the “abominable problem” of marine debris.  And indeed, one of the biggest environmental problems today is that of the plastic waste that is polluting the oceans, seas and waterways of the world. Everywhere.

Recently, I received an email from a reader urging me to devote more attention to what he referred to as the “abominable problem” of marine debris.  And indeed, one of the biggest environmental problems today is that of the plastic waste that is polluting the oceans, seas and waterways of the world. Everywhere. 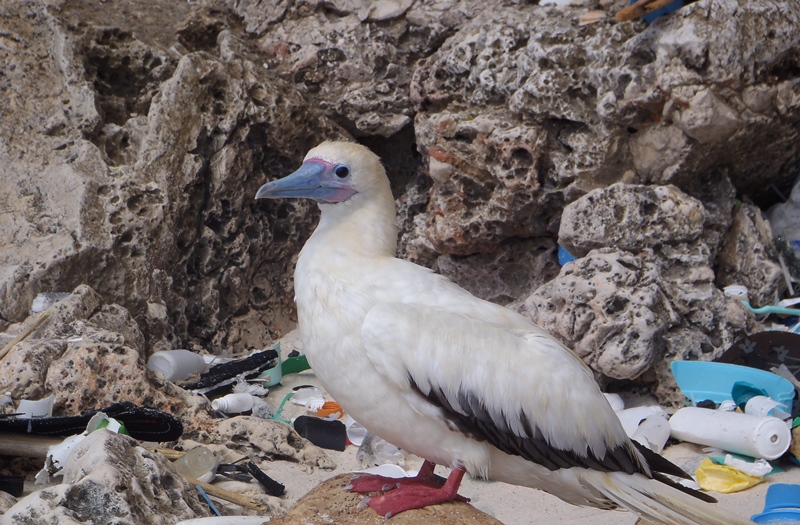 There is an estimated six times more plastic than plankton floating in the middle of the Pacific. And there are the pictures of the seals with plastic cups stuck on their noses, plastic neck bands growing into the skin around their necks, the turtles with ribbons of plastic streaming from their nostrils, the dolphins trapped in cast off fishing nets, the coral, starving on a diet of microplastic. The list is depressingly endless. As this reader wrote: “I am tired of seeing pictures of dead birds full of plastic.”

Unfortunately, he is right. It is true that no one is near fixing the problem, but what he should also know is that huge efforts are being made to do so—and not only by a host of government and international programs, NGOs, environmental organizations and creative thinkers like Dutch student Boyan Slat, whose Ocean Cleanup system was chosen by TIME as one of the 25 best inventions of 2015. The plastics industry, too, acutely conscious of the fact that it produces products that find their way into the marine environment, has made a pledge to combat this problem.

In March 2011, representatives of plastics organizations from around the globe released a "Declaration for Solutions on Marine Litter,” which to date has been signed by more than 65 associations representing the plastic industries in 35 countries. Six public commitments aimed at contributing to sustainable solutions were made, ranging from upstream prevention of marine litter to downstream clean-up activities and focusing on education, research, public policy, sharing best practices, plastics recycling/recovery, and plastic pellet containment, including campaigns to prevent losses due to poor industrial practice. The declaration has meanwhile led to some 185 projects that have been planned, initiated, or completed, varying, from beach clean-ups to expanding waste management capacities and from global research to awareness and education campaigns.

The problem of marine debris is a large and complex one, and it involves more than any single entity, industry, or government can solve. According to a study from the Institute for European Environmental Policy that appeared in June of this year:

“Recent research has estimated that in 2010, around 275 million metric tons (MT) of plastic waste was generated in 192 coastal countries, of which between 4.8 and 12.7 million MT entered the oceans (Jambeck et al, 2015). There are many different types of marine litter, ranging from large items such as abandoned fishing nets, to smaller but still visible items such as buoys, floats, bottles, polystyrene packaging, plastic pellets, plastic bags and cigarette stubs, and finally to micro and nano plastics, including microbeads in cosmetics and micro/nano-fibres from clothes.”

“Over time, large items often break down to ever-smaller particles that then become widely distributed globally throughout the marine environment, and are particularly prevalent on the seabed, surface and beaches ... Some marine litter originates from accidental losses (e.g. relocation of fishing gears by extreme tides, currents and waves), whilst others may be a result of deliberate action (e.g. abandonment of end-of- life fishing and aquaculture materials), or simply because actors are unaware of their obligations for the safe disposal of plastics. Product design that does not take into account the end-of-life of a product or results in single-use products, inadequate waste management practices and infrastructure, and direct littering by citizens and tourists exacerbate the problem and are other major sources of marine litter.” i

In short, we have a huge mess for which there is no quick fix.

Banning plastic altogether is not a realistic option, nor a necessary one. Plastics have brought a huge number of benefits to people and products around the world and using plastics in place of other materials has, in many cases, had a significant positive effect on sustainable development. This led Professor Richard Thompson (University of Plymouth, UK), speaking at the nova-Institute’s Microplastic in the Environment conference held in November in Cologne, to declare that a major challenge of this century will be to “keep the benefits of plastics without harming the environment with litter.”

It’s a challenge that was addressed in, among others, a Pritzker Environmental Law and Policy Brief dating from October 2013. Its authors advocated the creation of a corporate certification program aimed at reducing the amount of land-based plastic litter in the oceans, which would impose tough standards for labeling conforming products as “Ocean Friendly.”

To achieve certification, companies would have to satisfy requirements related to product design, manufacture, composition, labeling and life-cycle handling. An example would be to require plastic products to be designed to minimize waste by ensuring that no loose plastic pieces can escape into the environment (e.g., beverage bottles should include a “lid leash” attaching lids to bottles, and juice boxes should eliminate separate straws).

Other standards could specify that new products should incorporate some minimum high percentage of recycled plastics; that the materials used to make disposable plastic products, particularly single-use products, should be standardized to encourage the use of materials that are easily recycled and have large markets; and that products and packaging should be labeled to allow for tracking, showing where products were both manufactured and sold. This information would allow policymakers and advocates to target education, publicity, or regulatory enforcement funds toward the highest volume contributors to plastic marine litter.

Excellent ideas, one and all. And regulations do help.

Yet, in the end, what is required, first and foremost, is a fundamental change in human thinking and behavior. Because there is no clever engineering fix to solve this problem, nor should that be what we are relying on. Engineers alone—plastics and otherwise—did not get us into this predicament, and they alone can’t get us out of it. But they can certainly help.

As the plastics industry states in its Declaration: “Success in these efforts will require sustained, good faith cooperation among a wide range of stakeholders. We will do our part and invite other organizations to join us.”

And I hope that the reader who wrote to me will indeed choose to do so.