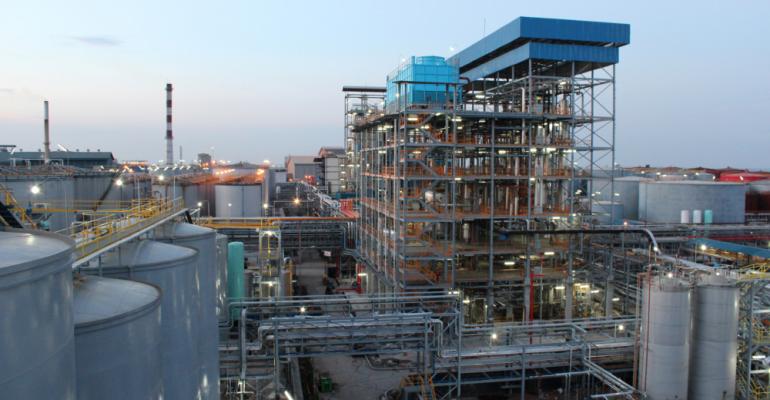 The first biorefinery based on a proprietary metathesis technology is now shipping commercial products, including novel specialty chemicals. Wilmar International Ltd., an agribusiness based in Singapore, and Elevance Renewable Sciences Inc., a high-growth specialty chemicals company headquartered in Woodbridge, IL, announced they have begun deliveries from their first world-scale biorefinery, a joint venture located in Gresik, Indonesia.

The first biorefinery based on a proprietary metathesis technology is now shipping commercial products, including novel specialty chemicals. Wilmar International Ltd., an agribusiness based in Singapore, and Elevance Renewable Sciences Inc., a high-growth specialty chemicals company headquartered in Woodbridge, IL, announced they have begun deliveries from their first world-scale biorefinery, a joint venture located in Gresik, Indonesia.

Andy Shafer, executive VP, sales and marketing for Elevance, explained to PlasticsToday that Elevance Renewable Sciences formed in 2007 as a spin-off from Cargill. "Since then we have raised over $300 million in financing and grown from just a few people to 150 today," Shafer said. "Our proprietary metathesis technology enables a very novel process to make high-performance specialty chemicals from natural oils such as soybean or canola here in the U.S., and initially from palm oil in Southeast Asia. We can use any renewable oils available-breaking the oils down and reforming them into specialty chemicals through a catalyst, which won the Nobel Prize in Chemistry in 2005. We have exclusive access to that chemistry for use with natural oils."

According to a joint press release, the commercial-scale manufacturing facility produces novel specialty chemicals, including multifunctional esters such as 9-decenoic methyl ester, a unique distribution of bio-based alpha and internal olefins including decene and a premium mixture of oleochemicals. The facility has a capacity of 180,000 tonnes (approximately 400 million lb) with the ability to double to 360,000 tonnes (approximately 800 million lb) of products.

Celene DiFrancia, platform leader, engineered polymers and coatings for Elevance, noted to PlasticsToday that these unique di-functional monomers will be available for bio-based polymers and engineered plastics, including long-chain polyamides, polyurethanes and polyesters.

"We won't make the polymers, just the monomers or components, for new polymer systems. We have access to a number of different monomers where the length or functionality of the molecule can be varied," DiFrancia explained.  "When used in the polymer system, each offers different attributes such as toughness or resistance to water, depending on the type of monomer in the system. In some cases, it's the same molecule that is currently available, but now from an alternative bio-source. We can also access molecules not currently commercially available. We're extending the portfolio of our customers with those offerings."

A push for durable applications over disposables
DiFrancia also commented that first and foremost, Elevance is providing "new molecules and new opportunities-a new value proposition" that offers high-performance materials based on bio-based feedstocks. "Secondly, we're providing sustainability or renewability, but our primary interest is in performance for more durable goods rather than disposables," she said. "There is a long-term drive in that space to move toward more sustainable materials. In disposables the conversation is about biodegradable. In durables it's more about sustainability in the broader system."

Food vs. feedstocks
The conversation about converting potential food products into monomers and additives for plastics is one that the companies have addressed. Shafer has been in area of renewable for 20 years, helping to form NatureWorks. "The food vs. fuel or feedstock has been a discussion for a long time. It's a good discussion. There are a number of considerations we need to look at-any feedstock has some challenges. Our technology gives us the ability to be flexible and move to feedstocks that are less sensitive; to make the right choices of feed stocks. There are issues with almost any feedstock but we can move toward those with fewer issues and negative consequences."

Rahul Kale, head of Biofuels and Oleochemicals at Wilmar International Ltd., said in a prepared statement, "The technology, now proven on a global scale, is driving positive changes in the chemical industry at large by delivering novel products that improve performance and reduce environmental impact compared to alternates. We are pleased that startup is complete and shipments to customers from our joint venture are now underway."