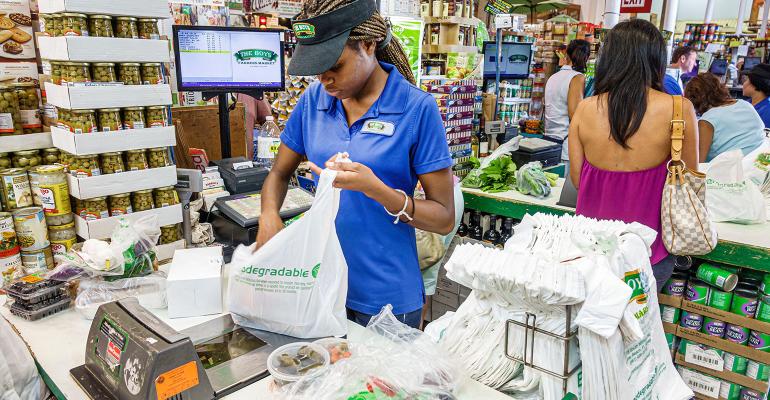 Seven manufacturers who produce most of the plastic bags used by California retailers have until Nov. 16 to prove that their products meet the state’s recyclability standards.

California Attorney General Rob Bonta sent letters on Nov. 2 to seven manufacturers of plastic bags demanding proof that the bags they make are recyclable as they claim.

Those seven manufacturers produce most of the bags used by California grocery retailers and have certified that the bags meet recyclability requirements as required by state law SB 270. That legislation allows retailers to sell plastic bags for at least 10 cents each if they are recyclable in the state. The law is part of the state’s effort to address plastic pollution.

Recycling plastic shopping bags and packaging films into new products is cost-prohibitive, so those items are not widely accepted in curbside recycling programs statewide.

“Most Californians are under the impression that plastic bags are recyclable,” Bonta said. “It's a logical conclusion: California has banned single-use plastics, and we see the 'chasing arrows' symbol or '100% recyclable' printed on most every bag we get from the grocery store. But astonishingly, there's a good chance that most, if not all, these bags are not actually recyclable in California. I demand that manufacturers provide evidence to back up their claims about the recyclability of our grocery bags.”

Bonta said that a comprehensive evaluation of the state of plastic recycling by the Statewide Commission on Recycling Markets and Curbside Recycling concluded that only three types of plastic – all of which are variations of plastic bottles – meet the definition of “recyclable” in California.

There is no working collection system, processing infrastructure, or market to support the recycling of plastic bags, Bonta said. Due to a widespread consumer belief that plastic bags are recyclable because of markings on the bags, the bags often are put in curbside recycling bins where they interfere with the processing of actual recyclable waste, sometimes shutting down recycling equipment.

“The plastics industry has engaged in an aggressive — and deceptive — marketing and advertising campaign to convince the public that they can recycle their way out of the plastic waste problem,” a press release from Bonta’s office said. “The truth is the vast majority of plastic products, by design, cannot be recycled. The rate of plastic recycling in the US today is estimated to be just 6%. The remaining 94% is landfilled, incinerated, or otherwise released into the environment.”

The attorney general’s investigation is examining the industry's “historic and ongoing efforts to deceive the public and whether, and to what extent, these actions may have violated the law.”

The attorney general’s office sent letters to Novolex, Revolution, Inteplast, Advance Polybag, Metro Polybag, Travelway, and Papier-Mettler asking them to substantiate their self-certification about the recyclability of their products by Nov. 16, 2022.