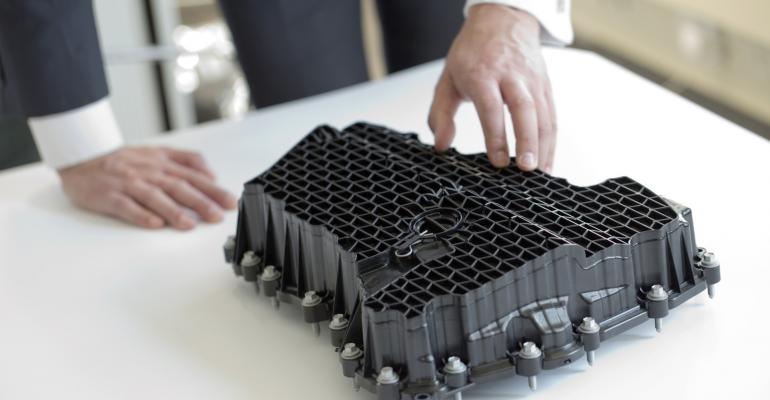 Engineering plastics suppliers have uncovered another application where their offerings can substitute heavier incumbent metal technology as evidenced by two recent developments that assist auto and truck makers in improving fuel economy and reducing emissions.

Engineering plastics suppliers have uncovered another application where their offerings can substitute heavier incumbent metal technology as evidenced by two recent developments that assist auto and truck makers in improving fuel economy and reducing emissions.

Polyamide (PA) resin has been employed in the oil sump of a commercially-available passenger vehicle  that is 60% lighter than the metal version it replaces. The Peugeot 508 employs a PA 6 grade from DSM Engineering Plastics (Singapore) that is part of the resin supplier's Akulon Ultraflow range.

The Peugeot 508 is the first vehicle to benefit from the new DSM solution, and more models will reportedly follow. Not only is the sump lighter: it also costs less to make and helps to lower fuel consumption and carbon dioxide emissions during the lifetime of the vehicle.

Oil sumps are ideal opportunities for engineering plastics among automotive applications according to DSM because they offer potential for significant weight reduction compared with traditional metal versions. But oil sumps also offer a considerable challenge for developers: their exposed position under the engine means that they have to withstand considerable mechanical stress caused by, for example, stones flying up from the road, and impacts from curb stones if the vehicle is driven off the road onto the pavement.

The French Tier One supplier Steep Plastique (Saint-Maurice-de-Beynost) was behind successful development of the lightweight sump. The use of highly sophisticated computer simulation software that was developed by Steep specifically for the application also enabled the sump to pass some very demanding application tests, including a severe curb impact test, a stone impact test, and an engine drop test. DSM's Akulon Ultraflow PA 6 also has the necessary oil resistance for the application.

The grade used for the application is Akulon Ultraflow K-FHG7, a 35% glass-reinforced, heat-stabilized PA 6 with very good flow properties. It offers significant processing advantages compared to standard PA 6 products, while maintaining the required mechanical properties. "This is an important step forward," says Ralph Ramaekers, Global Segment Manager, Powertrain, at DSM. "Bringing this project to a successful conclusion required a joint team effort by DSM and Steep, and a deep understanding of the application requirements. DSM continues to target metal replacement in the engine compartment and in the car body."

Eric Delachambre, Managing Director at Steep Plastique, says: "This important breakthrough demonstrates that DSM is developing the right materials to address the challenges the industry faces. Now, thanks to the significant improvements we have made in crash simulation, we will be able to make further progress in applications such as these, leading to vehicles with improved performance and reduced environmental impact."

Truck sump resists rocks; reduces noise
For their part, DuPont Performance Polymers (Wilmington, DE) and ElringKlinger AG (Dettingen/Erms, Germany) say that they have made a significant contribution to the heavy-truck industry's drive for fuel efficiency and emissions reduction by developing a lightweight, injection molded truck oil pan of DuPont Zytel PA resin. Developed for an international truck manufacturer, the oil pan is up to 50% (6 kg) lighter than aluminum, and can resist stone and gravel chip impact during the typical 1.5-million-km lifetime of a truck or bus engine. There also is a 2 decibel reduction in noise level compared with metal. The use of PA resin also enables the integration of functions that are not possible with metal, such as oil pick up pipes and fluid level sensors

"From 2013/2014, the Euro 6 emissions standard will launch a new generation of engines onto the roads; it imposes the same kind of strict emission limits for diesel as for petrol engines. This is why manufacturers are not only focusing on efficiently reducing exhaust gases, but also on lowering fuel consumption. With this in mind, they are pinpointing lighter-weight components in particular. The trend is toward oil pans made of PA 66 with a glass fiber content of 35 percent," says Klaus Bendl, head of R&D, Elastomer Technology /Modules Division at ElringKlinger.

As a trend-setter in the transition to plastics for large oil pan moldings, ElringKlinger selected a heat stabilized, lubricated grade of Zytel PA, following four years of prototype production and more than 3 000 hours of endurance testing.

"There also is a significant improvement in acoustics - a 2dB reduction in noise level is much more than that achieved with competing products," said Bendl, citing another advantage that plastics have over metals by helping to make engines quieter, in compliance with Euro 6 noise emission standards.

Truck oil pans are much larger and more complex than those for passenger cars, holding up to 10 times the volume of oil, and they must be considerably more robust in order to withstand truck engine lifetimes averaging 800,000 to 1.5 million km.

ElringKlinger has succeeded in meeting those tough performance demands by commercializing two large but lightweight oil pan modules of Zytel for new Mercedes-Benz 4- and 6-cylinder diesel engines. They weigh only 4.5 kg and 6.3 kg, respectively.