Plastics bottles in the crosshairs of two packaging giants 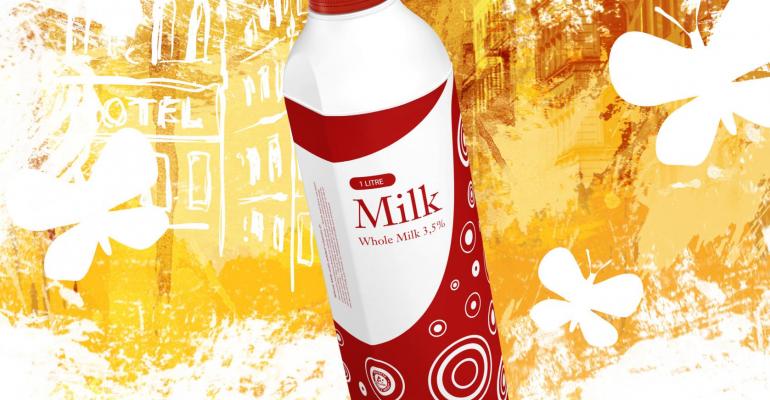 Are plastic bottles' days numbered? Hardly, not anytime soon anyway, but blowmolders are wise to be aware of the competition, which in two recent cases is coming from well-known packaging firms. One, from tube machine manufacturer Aisapack, is essentially a thin-walled tube able to be hot filled. The other is a bottle/carton crossbreed developed by Tetra Pak.

Are plastic bottles' days numbered? Hardly, not anytime soon anyway, but blowmolders are wise to be aware of the competition, which in two recent cases is coming from well-known packaging firms. One, from tube machine manufacturer Aisapack, is essentially a thin-walled tube able to be hot filled. The other is a bottle/carton crossbreed developed by Tetra Pak.

In 2008 we reported on Aisapack's work with Sacmi on development of compression molding systems able to process barrier closures. That process was to use the Bacomex technology developed by Aisapack (Vouvry, Switzerland) for processing multilayer tubes incorporating ethylene vinyl alcohol (EVOH) as a barrier layer. Aisapack's business is in manufacturing and marketing plastic tube-making machinery.

Now, Aisapack is pushing the tube development further with its Aisacan, a single serve beverage package that the company believes will be a hit among buyers of packaging for hot fill drinks such as juices and sports drinks. These Aisacans are comprised of rigid top and base sections with a flexible multilayer laminated film for the main body.

Production of the Aisacan has been adapted from Aisapack's established technology for making toothpaste tubes. The shoulder and base are injection molded and, together with pre-printed laminated film supplied by Finnish packaging processor Huhtamaki, assembled in an Aisapack ACM1 machine. Aisapack and Huhtamaki have worked together before, including on a "flexible can" project that appears to be the predecessor of the Aisacan one. In that prior project, for Germen retailer Aldi's coffee packaging, a PET/tie/aluminum/ tie/polypropylene (PP) laminate "Cyclero" film concept was developed by Huhtamaki with Aisapack, packaging machinery manufacturer Landenberg Verpackungsmaschinen, and welding equipment supplier Herrmann Ultraschalltechnik.

With Aisacan, claims the tube machine manufacturer, the bottle's flexible main body offers improved grip, due its ability to mold to the shape of a consumer's hands, and its smaller opening helps to avoid spillages during "on the go" consumption. The plastic can is up to 60% lighter than current hot fill and aseptic PET bottle designs, claims Aisapack. Together with associated transportation benefits, this equates to a carbon footprint reduction for a 330ml (11.158-oz) bottle of 53% compared with PET hot fill and 36% compared with PET aseptic. A further environmental benefit is that the entire package can be recycled, at least in Europe where polyethylene is part of current recycling systems.

Aisacans offer a large flat decoration area for printing or can be produced without decoration for subsequent sleeving. According to Aisapack, its consumer research confirmed the potential for the Aisacan format with 78% of respondents liking the new drinking experience. Research was carried out among young people aged 13 to 17 and 18 to 24, and mothers under 50.

Tetra Pak (Lund, Sweden) says it also conducted research among consumers to test their affinity for its new bottle buster, the Tetra Evero Aseptic, with consumers asked to rate it versus bottles made from PET and HDPE. The carton packaging giant has been talking about this new development for two years but the official launch came last month. Tetra Pak describes the Aseptic as "the world's first aseptic carton bottle for milk" offering dairies, stores and consumers the easy handling and pouring of a bottle with the environmental and cost advantages of a carton. "

Tetra Evero Aseptic is initially aimed at the ambient white milk market, including non-oxygen sensitive milk enriched with calcium, proteins, fibers, vitamins A and D and some minerals. This will soon expand to cover a wide range of beverages, including flavored milk, cream and oxygen sensitive milk, such as Omega 3, iron, zinc, and Vitamin C," said Charles Brand, the company's VP of marketing and product management.

Spain's largest dairy, Corporación Alimentaria Peñasanta (CAPSA), already has specified the Tetra Evero Aseptic packaging for its move into the value-added ambient dairy segment. Another European dairy, Weihenstephan, one of Germany's largest traditional dairies, has introduced the Tetra Evero Aseptic already to a select number of retail outlets in its first market test of the package.

Along with the carton bottle design, Tetra Pak is marketing its new A6 iLine aseptic filling machine, with a capacity of 10,000 packs/hour, which it says takes up to 50% less space and requires 30% less investment than other aseptic bottling lines. The packaging is made from FSC-certified renewable paperboard.

Tetra Pak isn't revealing much detail but says the package involves an "advanced injection molding technologies to fuse the top, carton sleeve and capped neck into a ready-to-fill package." The screw caps for the packages, which can be opened in one step, are the work of Sacmi, manufacturer of compression molding machinery and other machinery.

The Tetra Pak A6 iLine will first be available in Europe and South America.

According to web-based packaging portal FoodProductionDaily.com, which attended a press conference at Tetra Pak's facility for the launch of the package, "New formats are also envisaged and Tetra Pak continues to work on the technology. Among the introductions planned for 2012 include a separable top and a plant-based HDPE top." As we reported here, Tetra Pak in 2009 signed a contract with Braskem for supply of 5000 tonnes per year of 'green' HDPE starting this year, which Tetra Pak saying that amount is a bit more than 5% of its annual HDPE requirement. Braskem, South America's largest chemicals and plastics supplier, uses sugar cane to produce ethylene, which can then be converted into polyethylene.

FoodProductionDaily also reported that Tetra Pak has optimized molding of the neck of the bottle, which connects the carton body to the closure, so that it has been reduced from 3 - 6 seconds to less than 1.5 seconds.