All resin prices contain crude oil price risk, but for propylene and derivatives, the extent of oil price risk (i.e. the price correlation) is over 90%, as you would expect if you looked at any upstream/downstream process chart with the monomers only a few refining steps removed from crude oil itself. Interestingly, even resins with a less direct linkage in the production chain have a high oil price correlation, as shown here for high-impact polystyrene:

All resin prices contain crude oil price risk, but for propylene and derivatives, the extent of oil price risk (i.e. the price correlation) is over 90%, as you would expect if you looked at any upstream/downstream process chart with the monomers only a few refining steps removed from crude oil itself.

Interestingly, even resins with a less direct linkage in the production chain have a high oil price correlation, as shown here for high-impact polystyrene: 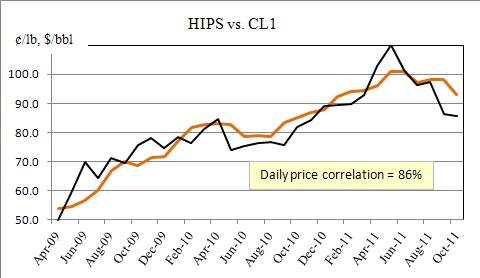 Crude oil feeds refineries, refineries feed petrochemical plants, and petrochemical plants produce resins. All resins market price surveys (PCW, CDI, Chem Orbis, etc.) keep a watchful eye on crude oil prices as they do their best to report fair and accurate resin market prices. But which crude oil benchmark best represents oil prices and, therefore, is the one resins buyers and sellers should watch most closely - Brent or WTI? More important, once deciding the best benchmark, how may processors manage their oil-based resins price risk? Are transactions in the scary futures market the only way? A couple of recent articles in the Wall St. Journal shed light on these questions.

A rise in the price of West Texas Intermediate crude futures isn't good news for the global economy. But, it isn't really the bad news that markets think either. The real crude price to watch is Brent, which has much more influence than WTI on oil prices in the rest of the world.

The disconnect between the price of WTI and the price of Brent has grown all year, mostly because the rise in the Canadian oil supply to North America led to a glut in WTI.

As WTI isn't exported in any quantity outside of North America [yet], the glut had little direct impact on the world crude market and the correlation between the price of WTI and Brent is a lot weaker than it once was. The weaker correlation means that a rally in the price of WTI will affect the U.S. economy only, rather than the global economy as a whole.

WTI surged last week after the announcement of the sale of an oil pipeline running from Oklahoma to Texas. Other oil markets barely budged.

Enbridge said it would buy a 50% stake in a pipeline that brings oil from the Gulf of Mexico to Cushing, Okla., and reverse the direction that the oil flows, so that oil would be leaving Oklahoma instead of arriving. That will ease the glut of WTI, stored at Cushing-a glut that has been keeping the price of WTI far below that of Brent, the European standard. The price of WTI jumped on the news. For most of 2011, WTI has trailed Brent - at times close to $30/bbl. The spread is now less than $10/bbl.

Though Brent and WTI represent two similar types of oil, they are subject to different regional forces. Before the start of the year, Cushing already was facing price pressures caused by a glut of oil. At the same time, Brent crude, the European benchmark, was buffeted by supply disruptions due to unrest in the Middle East.

The "correlation" between the two crudes-their tendency to move in the same direction-has averaged 96% over the past two decades. On Nov. 15, it had fallen to 0.71, the lowest in at least 20 years.

Brent's outperformance has reversed in the past month, partly because it no longer faces the supply disruptions it had earlier in the year. The economic turmoil in Europe has also reduced demand for oil, and as a result, Brent is moving sideways.

Those looking to bet that WTI will continue to rally should consider using the United States Oil exchange-traded fund [symbol USO], says an ETF analyst at Morningstar. The fund buys WTI futures contracts that expire in one month, sells them close to expiration, and buys new ones-a strategy known as a "roll." The shortest-term futures contract is more sensitive to the spot price of a barrel of oil than longer-term futures. USO has gained nearly 15% in the past month.

An investor [or hedger] who thinks oil will appreciate over the long term should buy either WTI or Brent. The ETFs are USO, USL, and BNO.

ETFs trade likes stocks, with accompanying put and call options. Even most processors, who see the oil or resins futures markets like Dracula sees daylight, own stocks in their personal portfolios. So it would be relatively easy and comfortable for most processors to take a small step towards managing resin prices.

Next week, I'll share what I would do if I worked for a fidgety processor who finally decided he'd had enough of volatile resins prices.