Qatar sees plastics as a pathway to an economy consisting of more than gas and oil and NPE2012 as one of the first steps in reaching that diversified future.

Qatar sees plastics as a pathway to an economy consisting of more than gas and oil and NPE2012 as one of the first steps in reaching that diversified future. Krishnan Venkatesan, manager of export promotion at the Qatar Development bank told PlasticsToday that he believes his country's booth (#15051) 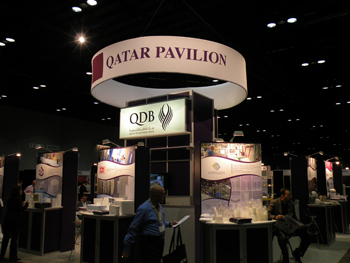 at NPE2012, featuring 13 Qatari plastics processing firms looking to boost exports, is the first by a Middle Eastern country at the Society of the Plastics Industry's triennial show.

The Qatar Development Bank (QDB) was established in 1997 as a means to support companies that would diversify the nation's economy. At this point in time, there are 29 plastics processing companies in Qatar, according to Venkatesan.

"You never know how long oil and gas will last," Venkatesan said. "Not everyone can work in the oil industry." To achieve a diversified economy and boost exports, the country has focused on small-to-medium enterprises (SMEs).

In terms of per capita income, Qatar is the richest nation in the world, Venkatesan said, and it has the second largest natural gas reserves globally, offering local companies a competitive advantage in resin prices and utilities. Simon Murray, general manager of pipe and tube extruder Hepworth, was one of the manufacturers who traveled to Orlando to be part of the Qatar booth.

Murray said the QDB provides credit guarantees as part of the lure for Hepworth, which has been in Doha since 2003, helping "put Qatar manufacturing on the world map." To further that goal, the company established an export development agency they're calling Tasdeer, which is part of the Qatar Development Bank.