Market overview: The spot resin markets saw some activity prior to the Thanksgiving holiday, which shortened the trading week. Spot-trading platform The Plastics Exchange (TPE) reported that after rising $0.05/lb on average earlier in November, polyethylene (PE) was mostly steady, while spot polypropylene (PP) edged up $0.005/lb to finish November up $0.02/lb.

Market overview: The spot resin markets saw some activity prior to the Thanksgiving holiday, which shortened the trading week. Spot-trading platform The Plastics Exchange (TPE) reported that after rising $0.05/lb on average earlier in November, polyethylene (PE) was mostly steady, while spot polypropylene (PP) edged up $0.005/lb to finish November up $0.02/lb. TPE CEO Michael Greenberg noted that market participants often look to lighten inventories at year end, making overall spot availability and interest limited, adding that tight supplies and relatively high feedstock costs are contributing to the firm undertone in the market at present. 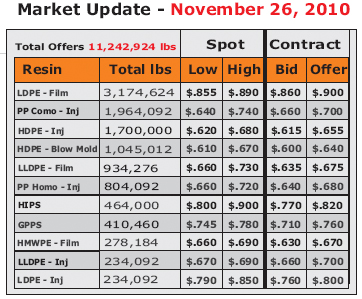 Energy markets moved higher last week, when January crude oil futures bucked the strength in the U.S. dollar and rallied $1.78/bbl to settle at $83.76/bbl last Friday. January natural gas futures also rose, reaching above $4.50/mmBtu at one point, before falling back to end the week at $4.399/mmBtu. They finished the week still up $0.075/mmBtu. The crude oil : natural gas price ratio contracted to 19:1, which is still very wide on a historic basis. This continues to provide the majority of North American PE producers a distinct cost advantage over international counterparts and is helping build a large base of monthly PE exports.

Ethylene's spot market cooled from the active pace seen through most of November, as the market felt a little pressure when material for November and December delivery traded below $0.52/lb. Spot ethylene was trading in the $0.30s/lb during October, but shot into the $0.50s/lb in early November due to several planned and unexpected cracker outages. Some of these ethylene facilities are back online, but the front-end of the market is still short of supply, but those supply constraints, as well as prices, are expected to ease over time. Ethylene for first-quarter 2011 delivery is nominally quoted in the mid-$0.40s/lb and the low $0.40s/lb for the second quarter.

Polyethylene (PE) spot prices were steady last week, holding on to the $0.05/lb gain already achieved during the course of November. Rising spot monomer costs supported producers' efforts to fully implement in their $0.04/lb price increase, which was originally nominated for October and only partially accepted then. Due to outages, a shortage of ethylene production drove monomer prices higher, pulling feedstock away from discretionary resin production. Although overall spot PE supplies are tight, Greenberg noted that several "interesting and well-priced offers" from resellers last week indicated poor demand at this price level. In spite of this, there is a $0.05/lb increase on the table for December with some talk of a further $0.06/lb increase for January.

Propylene remains firm and despite the shortened trading week, there was good activity in the market. Refinery grade propylene (RGP) for prompt delivery traded at $0.48/lb, essentially steady, while material for December delivery traded at $0.49/lb. Polymer grade propylene (PGP) traded at $0.5825/lb, up more than a penny from the previous week. The PGP-RGP spread has widened to about $0.10/lb. Petrologistic's propylene-dehydrogenation facility, which produces on-purpose propylene monomer, has been challenged to consistently make on-spec material since its initial startup. December PGP contracts have been nominated to increase by $0.03/lb, with November PGP contracts priced at $0.575/lb-a penny lower than in October.

Polypropylene (PP) spot prices inched another $0.005/lb higher last week in muted trading. Generic prime railcar offers were scattered, according to TPE, as firm propylene monomer costs have prompted at least one PP producer to issue a $0.03/lb price increase for December. Widespec PP had been scarce and rallied sharply from a trough price in the low $0.50s/lb back into the mid $0.60s/lb. There was however, a tinge of weakness seen this past week, with some good quality railcars offered lower in price without generating serious interest from buyers. November PP contracts were down $0.01/lb, and December contracts are looking higher, while the offgrade market is becoming a bit shaky.

"The resin markets were strong in November, fueled by rising feedstocks and limited spot resin supplies. Domestic demand seems to have waned, both from rising prices and from initial end of the year inventory balancing."