The new facility, located in Carlsbad, CA will be used to accelerate the commercialization of Verdezyne's bio-based adipic acid, one of two components used to manufacture 'green' nylon 6,6 and thermoplastic polyurethane resins from renewable sources, such as non-food based vegetable oils. It is the first demonstration of the production of bio-based adipic acid at scale from a non-petroleum source. 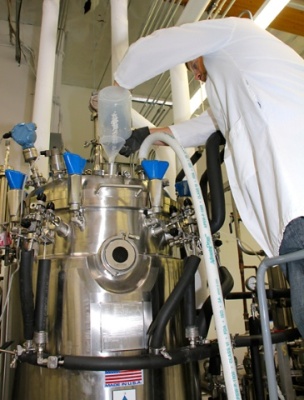 "We are thrilled about the opening of our pilot plant," said Dr. Stephen Picataggio, chief scientific officer of Verdezyne. "This plant will allow us to demonstrate the scalability of our process, validate our cost projections and generate sufficient quantities of material for commercial market development."

Based on the company's preliminary data and models, Verdezyne estimates that it will be able to produce adipic acid at about 30% lower cost than petroleum-based counterparts.

According to chief financial officer Brian Conn, Verdezyne expects to produce about 5-15 kilogram of the bio-adipic acid per week. The company said it is very close to moving into full commercial phase and is currently in partnership discussions "that could take it into production as early as 2012," said Conn.