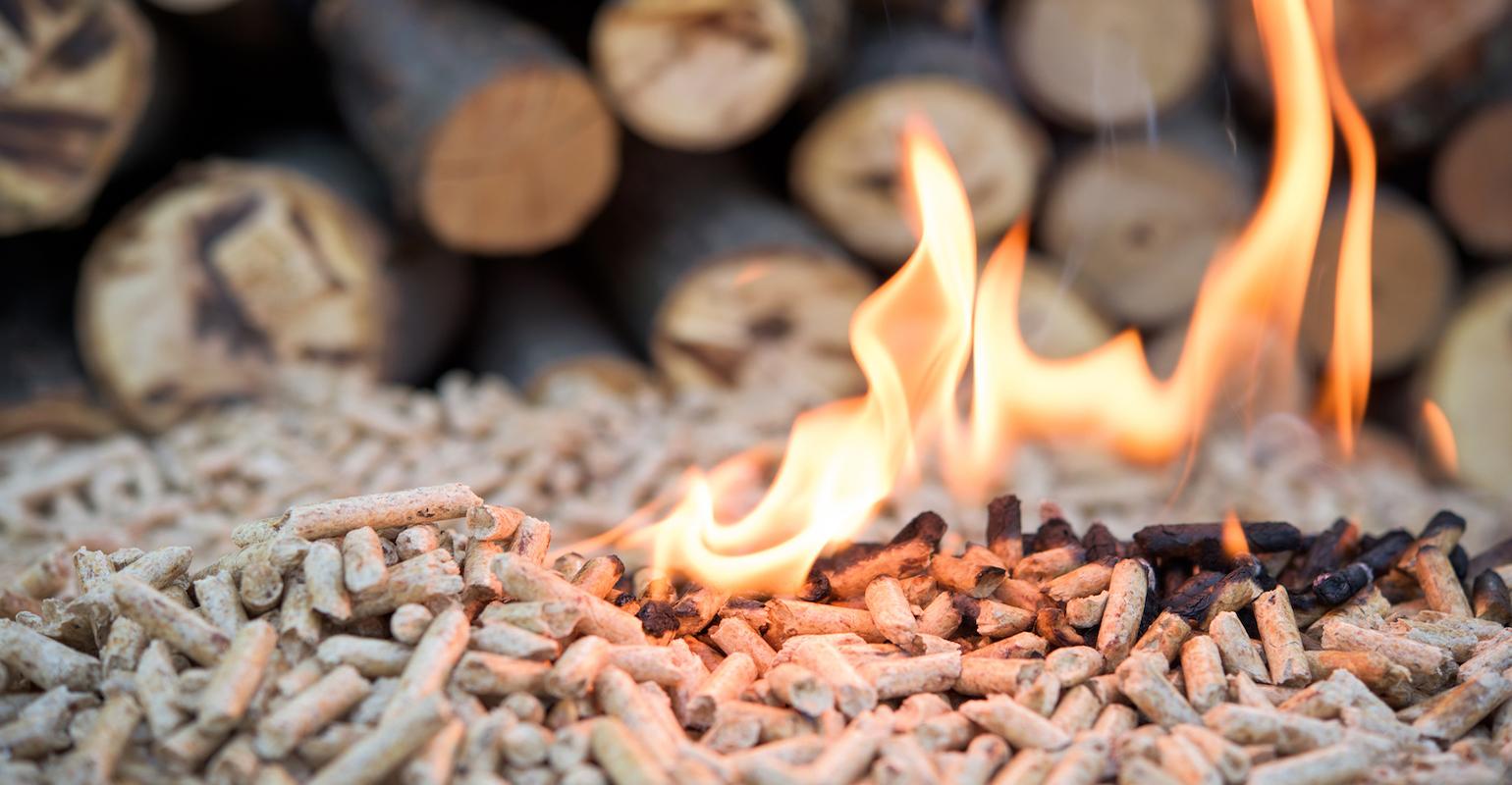 A huge industry has developed around the use of wood pellets as a source of energy, and wood pulp–based beverage “bottles” are being promoted as an eco-friendly alternative to plastics. In fact, these initiatives may be doing more environmental harm than good.

It wasn’t that long ago when people used wood to build their cooking fires and heat their homes on cold winter nights. The 20th century brought us better, cleaner ways than burning wood, such as natural gas and oil, even some types of coal. So why is there a global push to return to burning wood as a source of energy? It seems that the Kyoto Protocol signed in 1997 provided a loophole for the burning of forest biomass as a carbon-neutral “renewable energy source” equal to wind and solar.

According to an article published in Mongabay on Aug. 31, the reasoning behind the designation of biomass as “renewable energy” in the Kyoto Protocol was that “the carbon released by burning wood pellets would be offset by the replanting of new trees.” However, as Justin Catanoso notes in his article, “Are forests the new coal? Global alarm sounds as biomass burning surges,” this is based on the number of trees being planted to replace those being processed for fuel pellets. The timeline for the growth of these trees — 50 to 100 years — is “far too long given the accelerating pace of climate change.”

According to the US Energy Information Administration (EIA), the amount of CO2 produced when a fuel is burned is a function of the carbon content of the fuel. The heat content or amount of energy produced when a fuel is burned is mainly determined by the carbon (C) and hydrogen (H) content of the fuel. Natural gas is primarily methane (CH4), which has higher energy content relative to other fuels, and thus it has a relatively lower CO2-to-energy content, said the EIA’s information.

The EIA lists pounds of CO2 emitted per million BTUs of energy for the various fuels:

A pound of anthracite coal provides almost twice the BTUs as a pound of wood pellets. Burning wood pellets releases 65% more CO2 than coal per megawatt hour, according to the EIA report.

While it is true that plants take in CO2, it is also true that during their lifetimes plants generally give off about half of the CO2 they absorb, although this varies a great deal between different kinds of plants. When plants die or when forests are cut to produce pellets, they release almost all of the stored carbon into the atmosphere.

Despite the current debate taking place over the issue of burning forest biomass as fuel, those promoting the industry continue to see this process as a sustainable solution to climate change. Catanoso notes that the forest biomass industry “is sprawling and spreading globally — rapidly growing in size, scale, revenue, and political influence.”

Inside Climate News recently reported that the exploding market for wood pellets is “driven largely by European climate policies and subsidies that reward burning wood, even as an increasing number of scientists call out what they see as a dangerous carbon accounting loophole that threatens the 2050 goals of the Paris climate agreement.” Between 2012 and 2019, the United States exported 6.9 million metric tons of wood pellets, nearly all coming from the southern US, according to Forisk Consulting LLC for Inside Climate News.

At the UN climate summit in Madrid last December, Franz Timmermans, Executive Vice President of the EU and a Dutch politician, told Mongabay “the Renewable Energy Directive (RED) current biomass needs to be reviewed because of recent studies. We have to make sure that what we do with biofuels is sustainable and does not do more harm than good.”

Plants emit 120 billion tons of CO2 per year globally through the process of photosynthesis because there is twice as much carbon in plants and the soil than in the atmosphere, according to Dr. Patrick Moore, a long-time environmental scientist and currently with the CO2 Coalition, an organization that presents alternative views to anthropogenic climate change.

As I’ve stated in previous blogs, all fossil fuels are derived from plants, so using biomass is not much different than using natural gas or oil; biomass is much newer but contains as much or more CO2 than fossil fuels extracted from deep in the earth that are millions of years old. Yet many would like us to believe that using fossil fuels such as petroleum and natural gas as a fuel source to make products, including plastics, is somehow worse than burning wood. I’ve long been a proponent of burning hard-to-recycle plastic waste to obtain the energy value from it. Plastic products that can be easily recycled such as PET and HDPE, even some types of polystyrene and polypropylene, should be recycled.

Yet, environmentalists continue to insist on recycling, reusing, and composting as a solution, while dismissing incineration as non-viable. Millions of dollars are being thrown at developing bioplastics that will disappear in the environment because they are made from “plant-based” materials when, in fact, all plastics are made from plant-based materials because fossil fuels are plant based!

Now we have a huge industry for wood pellets for energy, and newly developed uses for wood pulp to make “bottles” for liquor and other beverages as a more eco-friendly solution to plastics. We must ask, really?

Forests are even being used in carbon offset programs. An article in the Wall Street Journal on Aug. 24, 2020, “Emissions Rules Turn Saving Trees into Big Business,” told of big energy companies investing in forest preservation as carbon offsets. These companies are using the carbon stored in trees to offset the carbon that the energy companies produce. In other words, the trees are being used as carbon storehouses.

The WSJ article noted that BP PLC has “already bought more than 40 million California offset credits since 2016 at a cost of hundreds of millions of dollars.” Currently, California is the only US state with a “cap-and-trade system” that can accommodate this type of deal. Last autumn, said the article, BP invested $5 million in Pennsylvania’s Finite Carbon, a pioneer in the business of helping land-owners create and sell credits. “By paying landowners not to cut, companies can say they are responsible for having locked up a specific amount of carbon in the standing trees, calculable to the metric ton,” said the WSJ.

Given the huge number of forest fires California has experienced — 7,427 just this year with 2,617,607 acres burned as of Sept. 7, and the fires continue to rage — it makes me wonder just how BP’s deal is working out. The millions of acres of forests that have burned over the past few years have obviously released tons of CO2 into the atmosphere and the soil. If forests burn that BP pays to keep intact to absorb CO2, do BP and other large energy companies lose their carbon capture credits? Are they charged for the carbon release from these burnt forests?

Trees and plants give off CO2 as they respire at night, because they cannot “fix” the CO2, and thus become producers of CO2. The question is: Are corporate buyers of forests as carbon offsets really doing the math? Besides, according to a 2017 article in Yale Environment 360, even if the harvested trees are replaced by new seedlings, it will take them between “20 and 100 years to grow sufficiently to take up all the CO2 emitted by burning the old trees.”

BP, ExxonMobil, Chevron, and others are in the business of getting petroleum from the earth (which is plant-based, remember) to make so-called fossil fuels and polymer materials; are these companies at the same time preventing the loss of trees to the wood pellet energy industry? Is returning to wood-burning for energy through the conversion of coal-fired power plants to wood-fired power plants really better for the planet than the use of fossil fuels (coal, natural gas) or nuclear power?

These two competing interests — Big Oil and the wood-pellet energy concerns driven by environmentalists — have opposing goals: Cutting forests for the production and exportation of wood pellets as a renewable (green) energy source on the one hand vs. maintaining forests as a source of carbon capture to reduce CO2 in the atmosphere. The environmentalists can’t have it both ways. They will have to choose sacrificing forests in the name of “green energy” or saving forests to help Big Oil gather carbon credits.

That leads us to consider whether “paper” bottles, made of wood pulp from processing facilities, are truly any better for the environment than plastic bottles that, ultimately, also come from plants. Whenever I read that paper is becoming a more popular “green” replacement for plastics, I wonder just how educated consumers are in the science of plants and paper vs. plastic. Do they really understand how paper is made? What is the better alternative: Cutting trees to use either as energy in the form of burning wood pellets or as single-use packaging alternatives, or allowing trees to remain intact to capture carbon and use plastic for single-use packaging?

Let us know what you think.