Will Twinkies continue to have a seemingly endless shelf life?

UPDATE: So after I had just posted this blog post, CNBC issued this headline: "Twinkies Saved! Hostess, Bakers Union Agree to Mediation, Avoiding Shutdown." I'll keep an eye out for more developments. This is why I love working for an online magazine - we can write updates as they happen.

UPDATE: So after I had just posted this blog post, CNBC issued this headline: "Twinkies Saved! Hostess, Bakers Union Agree to Mediation, Avoiding Shutdown." I'll keep an eye out for more developments. This is why I love working for an online magazine - we can write updates as they happen.

There were plenty of unhappy consumers last week crying into their chocolate cake Ding Dongs. Hostess Brands, the maker of the iconic cake products such as Wonder Bread, Twinkies and Ho Ho's, had announced last Friday it would shut down operations and layoff more than 18,000 employees.

The company stated the nationwide strike of the company's largest union "crippled" its ability to produce and deliver products at multiple facilities. 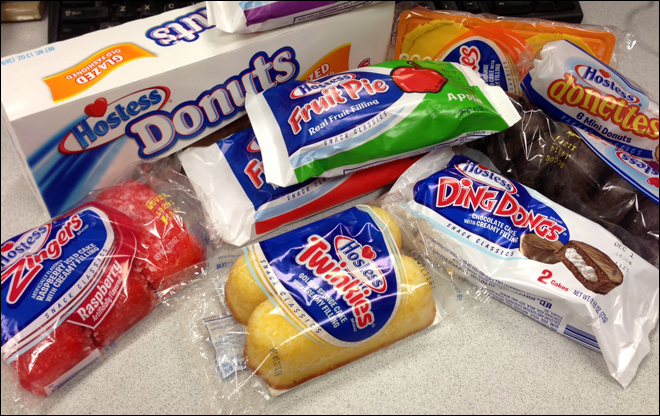 The potential shutdown could mean the closure of 33 bakeries, 565 distribution centers, approximately 5,500 delivery routes and 570 bakery outlet stores throughout the U.S.

In an overwhelming feeling of nostalgia, many Americans were outraged and apparently rushed to their local stores to stock up on as many of these products as possible. People who probably haven't touched a Twinkie in years were reported to pay insane amounts.

On Ebay, according to Consumer Affairs, five boxes of 10 Twinkies had 12 bidders with a high bid of $117.50, which equates to about $2.35 per Twinkie. A little crazy, wouldn't you say?

Closer look at the packaging

Arguably, as iconic as the product itself is the crinkly plastic packaging that kept the treats secure and "fresh." For instance, I saw one Twitter user remark, "I don't eat the Hostess baked goods but I love looking at them in their pretty plastic packaging."

I was curious if Hostess produced its own packaging and what I found was an article on BakingBusiness.com that highlighted the company's manufacturing methods at its Dolly Madison bakery in Emporia, KS.

Emporia, started up in 1965, employs more than 700 people and operated a 24/7 schedule. It outputs more than 3 million lb of donuts, cakes, sweet rolls and fried pies weekly on nine processing lines, the article stated.

The bakery featured five donut lines, a single line for small cakes, another for larger cakes, one made sweet goods and another produced fried pies and a high-speed shrink-wrapping system served as the tenth line.

For instance, the article detailed how a pie line outputs Hostess Fruit Pies in a variety of flavors.

For Twinkies, machines at the factories wrap the products in airtight plastic packaging, according to HowStuffWorks. 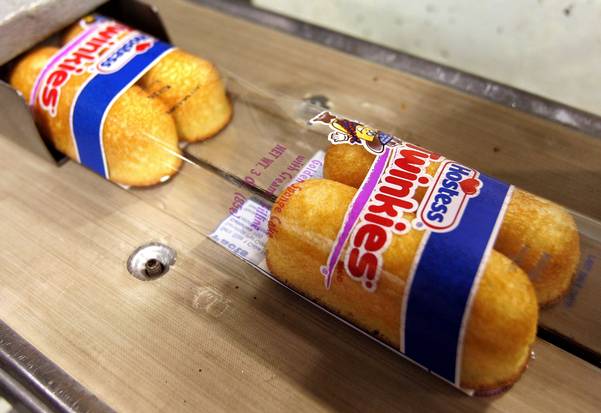 There was a time where Wonder Bread and Twinkies were as American as a white picket fence but with consumers requesting healthier alternatives, these products started to seemed old fashion. Instead of consuming a bakery item constructed in a factory, some consumers are opting to shop at their local bakery or make the sweets on their own.

In addition, in an era of increasing obesity rates, many seemed to believe Hostess Brands' would derail their healthy journey. Twinkies have 150 calories and 4.5 grams of fat, while a Ding Dong chocolate cake with filling has 368 calories and 19.4 grams of fat.

Let's not forget the well-known rumor that Twinkies had an indefinite shelf life that could last longer than its plastic packaging. That urban legend was eventually debunked when it was found out that Twinkies do have a shelf life - of about 25 days.

Steve Ettlinger, author of the book "Twinkie, Deconstructed," said he has some Twinkies that are eight years old, and while they're hard, they are not "spoiled."

That does not sound appetizing.

Anyway, new research indicates that the global food and drink packaging market will have a value of $329 billion in 2012, according to a new report from Visiongain. The report stated that various consumer trends, such as gentrifying societies, environmental awareness, and increasingly busy lifestyles are driving the food and drink packaging markets.

However, the report cited that this is contrasted with developed markets, which are unlikely to experience strong growth due to economic uncertainty in many countries and a saturation of these markets.

Although, there's still a market for pre-packaged treats, after all, Hostess reported $2.5 billion in revenue per year, with Twinkies alone have brought in $68 million in revenue so far this year. Hostess said it made 50 million Twinkies annually.

Some feared Twinkies have finally expired, but with the Judge ordering Hostess to mediate with the union, it sounds like the company won't go out of business just yet.

So it turns out, Twinkie might have a longer shelf life than we all imagined.