Zylon helmet strip proves its worth at Indianapolis Motor Speedway 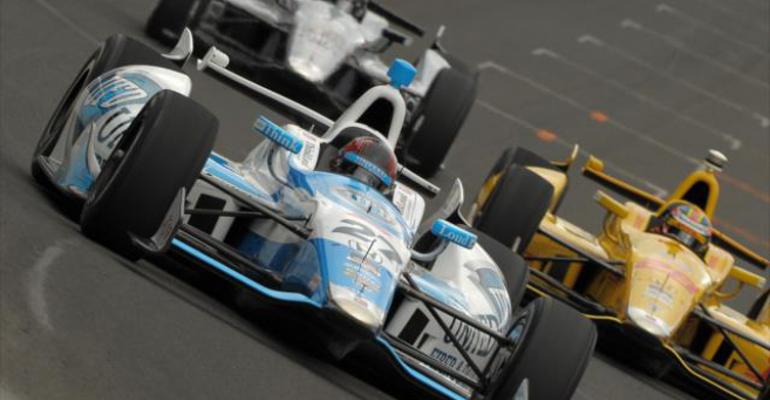 IndyCar driver James Hinchcliffe described the features of his Arai-made racing helmet in a short video for Autoweek, which made its way onto YouTube in April 2014. This helmet has highly sophisticated features, including what Hinchcliffe called an "eject system" that incorporates an inflatable plastic bag inside the helmet. The bag can be filled using an external helmet nozzle to lift the helmet off the driver's head from the inside, making it an ideal way to get the helmet off of a driver suspected of having a neck injury.

IndyCar driver James Hinchcliffe described the features of his Arai-made racing helmet in a short video for Autoweek, which made its way onto YouTube in April 2014. This helmet has highly sophisticated features, including what Hinchcliffe called an "eject system" that incorporates an inflatable plastic bag inside the helmet. The bag can be filled using an external helmet nozzle to lift the helmet off the driver's head from the inside, making it an ideal way to get the helmet off of a driver suspected of having a neck injury. Hinchcliffe also described an important addition mandated for IndyCar helmets in 2014: a strip of material that is adhered to the helmet over the visor.  The strip is composed of Zylon fiber, a material long-used in anti-intrusion applications and applications requiring high strength and low weight.

The Zylon strip on IndyCar helmets, Hinchcliffe said in the video, "is going to stop an object much better than just the plastic in the visor."

Hinchcliffe concluded in the video that IndyCar drivers are fortunate "to have this kind of advanced science and technology involved in keeping this thing—" he taps his own head "—in one piece."

Fast forward to May 10, 2014. The first incident of the first-ever Grand Prix of Indianapolis occurred within seconds of the green flag. The car of Sebastian Saavedra, at the front of the pack in the pole position, stalled at the start. Saavedra sat there helplessly as the entire starting line-up accelerated to race speed behind him. Race spotters shouted warnings over the radios to their drivers about the stalled car, but the warnings didn't come fast enough. Saavedra was clipped from behind by driver Carlos Munoz—then was slammed violently by driver Mikhail Aleshin. The Indy cars, designed to throw off parts as a way of dissipating the impact force to the driver, seemed to burst open all over the track.

But the safety engineering worked. None of the drivers were injured in those few quick, explosive seconds.

Another driver, Martin Plowman, was struck in the head by flying debris from the accident. Plowman's HP7 helmet, from Bell Racing USA, was credited with saving Plowman from injury. 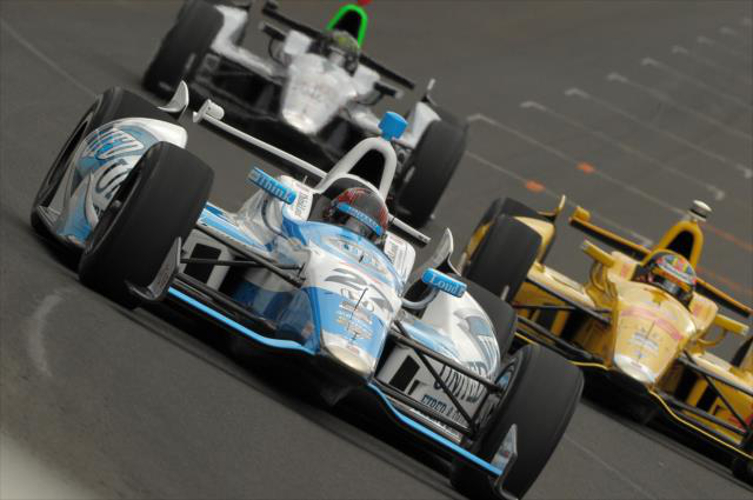 Bell began providing its sponsored IndyCar drivers with Zylon panels during the 2013 season. Adhesion of the Zylon strip is a concern; Bell uses an adhesive material with surface tension properties that work in conjunction with the polycarbonate substrate used in the racing shields. Bell noted the Zylon visor panel on Martin Plowman's helmet was not dislodged by the impact with flying debris.

Another incident took place much later in the race, on Lap 57, and it happened so fast that almost nobody saw it.

The race restarted after a yellow flag.  Two cars had a minor collision, throwing off some parts, but neither car became undriveable and both continued to the pits for repairs.

But the blue-and-white car of James Hinchcliffe, several car-lengths back, pulled off the racetrack into the grass without any visible sign of damage. Race announcers were left to speculate about the problem.

Unlike the violent crash of the start of the race, the Lap 57 incident seemed like a non-event.  The race didn't even go to yellow-flag status because the Hinchcliffe car had pulled off safely at Turn 7 and could be recovered without sending a tow vehicle onto the racetrack. Even then, the driver's own crew didn't seem to know the problem and told announcers that they thought the driver might have a hand injury.  That didn't comport with the shots of Hinchcliffe being taken away in a stretcher and holding his head.

It wasn't until well after the race that slow-motion video was isolated to show what happened. A piece of debris from the two-car collision sent a piece of wreckage into the path of the Hinchcliffe car. It slammed the driver's race helmet at tremendous speed.

Hinchcliffe underwent a CT scan, was diagnosed with a concussion, and was released from the hospital.  After a few days' rest he underwent a post-concussion evaluation by Indy Racing League doctors, who cleared him to race again. That was a huge relief to the driver—time trials for the premiere event of the season, the 2014 Indianapolis 500, were just days away.

His four-lap average qualifying speed on Day 2 was 230.839 MPH, second only to the 231.067 MPH average driven by Ed Carpenter. That puts Hinchcliffe in the middle of the front row for the start of the May 25th Indy 500 Race.