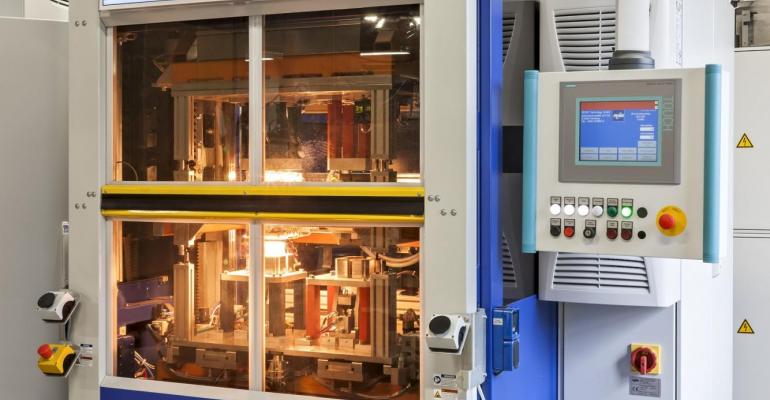 Extrusion blow-molded components often exhibit tolerances that are considerably higher than would otherwise be expected in the injection molding field. On this account, ensuring proper sealing when using infrared welding can be challenging, particularly when gas- or liquid-handling systems are in question.

Extrusion blow-molded components often exhibit tolerances that are considerably higher than would otherwise be expected in the injection molding field. On this account, ensuring proper sealing when using infrared welding can be challenging, particularly when gas- or liquid-handling systems are in question.

German company FRIMO (Lotte) now says it has a solution with its tolerance compensation system, enabling pipes to be precision-welded at a constant welding depth, regardless of the parts involved. Components to be welded are brought together until they touch with minimal force using motorized servo drives. A programmable logic controller (PLC) then stores a reference point determined from this operation. If another component is to be joined, it too is moved to this reference point using the internal tool tolerance compensation system. Accordingly, all components are referenced before the joining process and any possible tolerances between the components are compensated for.

Another feature FRIMO has added to its IR welding arsenal relates to documentation. The company's infrared JoinLine IR series welding machines can be equipped with a precision. ultra-compact, modular infrared camera system including up to four cameras. The IR camera system is used to monitor the required temperature distribution of the components to be joined, post-heating and pre-joining, making it a key part of the overall quality assurance system.

The cameras installed come with 336 x 256-pixel resolution as standard. This equates to over 86,000 temperature measuring points on the component. The resulting resolution, used to detect local temperature variations, is more than sufficient for most applications according to Frimo.

One special feature of the FRIMO system is the ability to define as many evaluation ranges and evaluation functions as desired via an easily operated graphical user interface. The intelligent algorithms of the software facilitate accurate detection and classification of measured ranges, including by component distortion or expansion tolerances.

Since the purpose-built intelligent cameras handle all the temperature image processing and analysis process as well as image acquisition, this eliminates the need for an additional computer and software. The cameras are directly connected via an Ethernet interface to the PLC of the welding machine.

During the FAKUMA trade fair in Germany in October, FRIMO also unveiled addition to its portfolio of standardized infrared welding systems in the JoinLine IR model series. In addition to the IR-V-ECO-1200 with a maximum clamping surface of 1200 x 600 mm, the range now includes a JoinLine IR-V-ECO-800 (800 x 450 mm.) The ECO 800 can be equipped with up to 24 heating circuits, while the 1200 model can accommodate up to 48 (optionally extendable up to a maximum of 72).

Both these models reportedly help close the gap between the 500 and 1600 models currently on sale. Further, the modular platform concept allows faster deliveries with unchanged spare parts as well as machines that are economically priced and stand out with high precision and swifter drive systems. The JoinLine IR series of welding machines also come equipped with quick-change tool systems .

FRIMO has also developed a plastics welding app that assists processors in determining which plastics can be welded or riveted together and which methods are optimal for this joining process. Selecting the materials to be joined could not be simpler according to FRIMO, while the app also determines all suitable processing methods. The results can also be sent directly via e-mail. The app is available free of charge via the Google Play Store, Windows Phone Store and Apple Store.