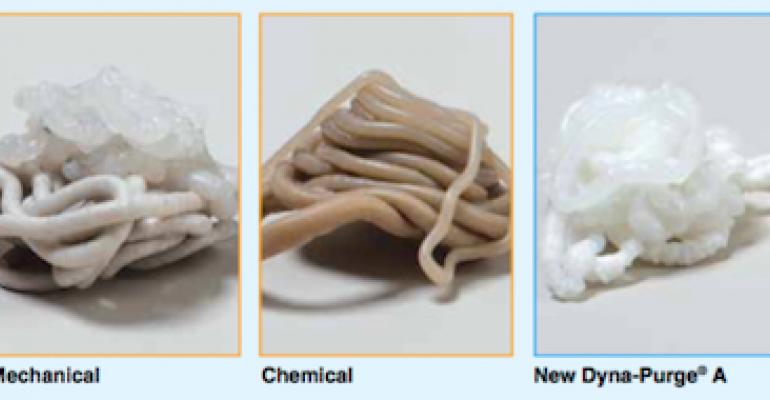 According to Tim Cutler, Dyna-Purge Vice President, the company commissioned Penn State Erie, The Behrend College, of Erie, PA, to conduct an extensive independent study on Dyna-Purge A in March 2016 at the Burke Center – School of Engineering. The study compared commercial purging compounds and an in-house resin to Dyna-Purge A. In purging and post purge results, only hybrid Dyna-Purge A left the injection molding machine clean and free of contaminants, said the company.

“The independent study on Dyna-Purge A demonstrates that it is more effective than mechanical (abrasive) and chemical purging compounds and in-house resins for purging during PP color changes,” Cutler explained. “Dyna-Purge A saves time and money as it lowers purging costs and scrap rates.”

In testing, the purging process successfully transitioned from black to natural PP in only seven shots using Dyna-Purge A. The hybrid purging compound is engineered to exit the machine with the next production resin, leaving behind no residual purging compound. It is versatile for a variety of applications including hot runners, profiles, sheet and cast film, with no minimum clearances. Dyna-Purge A does not require soaking or temperature alterations, and will not produce noxious fumes and odors or leave behind residue, said the company’s information. Furthermore, the ingredients are safe and non-hazardous.

A copy of the recently completed independent study can be downloaded from the Dyna-Purge website.