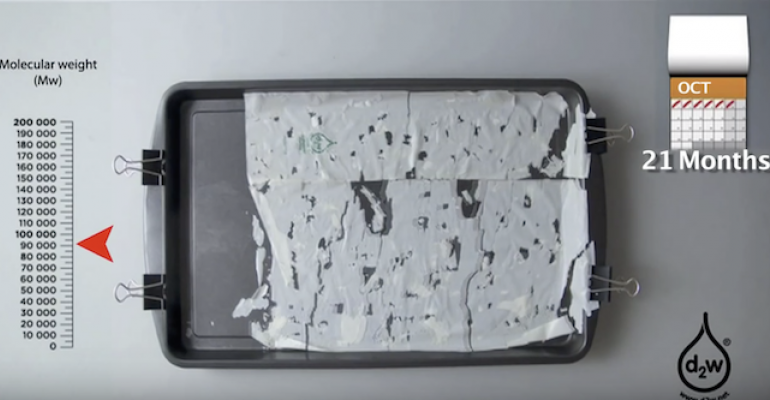 Studies show that oxo-biodegradable plastics have a valid role to play in the circular economy, but some are adamantly tuning out the science.

It’s been a hard slog for companies that make an additive that actually helps plastics biodegrade faster in the presence of oxygen. Oxo-biodegradable additives are intended for plastics that get into the open environment—including the marine environment—to offset the carelessness of people who litter and the lack of collection, recycling or incineration infrastructure.

Over the past few years, the Oxo-Biodegradable Plastics Association (OPA; London) has been fighting for recognition by the EU for its member companies’ right to be a viable part of the circular economy, not part of an over-arching ban. It was understandably frustrated by the passage on March 27, 2019, of a law banning single-use plastics in the European Union. The Single-Use Plastics Directive confuses oxo-biodegradable with oxo-degradable plastics, a persistent misunderstanding. Oxo-biodegradable plastics have even gotten pushback from the bioplastics industry, which claims that they will contribute to more waste in the environment.

The oxo-biodegradable industry is fighting back, citing many years of testing and studies showing that the oxo-biodegradable additive helps plastics that escape into the environment degrade much faster than ordinary plastics. Oxo-degradable plastic, on the other hand, is essentially ordinary plastic that degrades and fragments into smaller and smaller pieces but does not break down at the molecular or polymeric level. Thus, explains information from the OPA, it does not biodegrade except over a very long period of time.

In November 2018, UK-based Symphony Environmental Technologies welcomed a report from distinguished lawyer and former Deputy Judge of the High Court in England, Peter Susman, QC, that declared the scientific case for oxo-biodegradable technologies to be “clear and compelling.”

Symphony Environmental Technologies will be at K 2019 (stand B 40, hall 8) showcasing its new products and helping to educate people about the advantages of oxo-biodegradable materials. The company is one of the leading producers of oxo-biodegradable plastic products, which are now mandatory in 12 countries. Michael Stephen, Deputy Chairman of Symphony and Chairman of OPA, described the EU as following a “very bizarre procedure.”

In an interview with PlasticsToday, Stephen noted that the EU is “evading its own laws and procedures for banning or restricting substances as enacted in the REACH regulation going back to 2006, which sets out the entire process that must be followed before banning a product, including getting a scientific dossier from the European Chemicals Agency (ECHA),” he explained. “Then it goes to two committees that review all the pertinent information and then to the public for input. In the case of oxo-biodegradable plastic materials, the EU went straight from A to Z and ignored everything in between.”

Stephen noted that the largest baker in the world, Grupo Bimbo, has been using oxo-biodegradable materials for its packaging in Mexico for 11 years and has decided to roll it out to other countries where it operates. The CEO of Grupo Bimbo and its scientists said oxo-biodegradable is a great idea and they’re going to keep using it. “What scientific evidence does the EU have that it should be banned? They have none,” stated Stephen.

The 15-page opinion released last November by Susman concluded that oxo-biodegradable technology does facilitate the ultimate biodegradation of plastics in air or seawater by bacteria, fungi or algae within a reasonable time, so as to cause the plastic to cease to exist as such far sooner than ordinary plastics, without causing any toxicity. The time-lapse video embedded below, provided by Symphony, shows an oxo-biodegradable plastic bag decomposing over time.

Additionally, Susman concluded that “the benefit is obvious of reducing future contributions to the scourge of plastic pollution of land and sea” and is “compatible with composting and recycling. Criticism alleging that oxo-biodegradable plastic technology would materially encourage littering [is] fanciful and unrealistic,” wrote Susman.

On Aug. 15 of this year, the OPA released a publication from Queen Mary University London, the latest in a long line of published scientific work over 40 years proving that oxo-biodegradable plastic does not just fragment into tiny pieces but does actually degrade, then biodegrade, under conditions expected in the open environment, i.e., with access to oxygen and bacteria.

The five scientists who completed the study stated:

The study by Queen Mary University adds to the scientific work reviewed by Susman as outlined above.

What about bio-based plastics?

Bio-based plastic products cannot be recycled in the ordinary plastics recycling stream. Bio-based materials are useful for making bags, in which to put kitchen food waste that can be sent to a municipal composting facility, but bio-based plastic is not tested to biodegrade in the open environment. Also, it doesn’t turn into compost but into CO2, and according to the ASTM D6400 standard 90% of it has to break down into CO2 within 180 days.

It often doesn’t make sense to recycle cheap, thin film made from PE, PP and PS, which is contaminated, and the oxo-biodegradable additive is used for these plastic materials that are not worth recycling. However, Stephen added, if someone does want to recycle them, the OPA has scientific studies that show they can be. Oxo-biodegradable plastics are tested to meet ASTM D6954 and are designed to break down faster in the open environment, including in marine environments.

Susman stated, “It is no longer tenable to conclude that there is ‘no firm evidence either way’ whether oxo-biodegradable plastic technology is effective. I consider that recent research provides clear and compelling evidence that oxo-biodegradable plastic, indeed, is effective in facilitating very significant speedier degradation than is the case when that technology is not used.”

A pre-K show press release on the European plastics industry noted that “Europe is proving to be an important center for production of these materials. Latest market data compiled by European Bioplastics (in cooperation with the Nova-Institute) shows around 20% of global bioplastics production capacity, which reached 2.11 million tons in 2018, is located in Europe. That figure should grow to 27% by 2023, supported by recently adopted policies in several European member states, notably Italy and France.”

The European Bioplastics group says it fully supports the transition from a “linear” to a “no-leakage” circular and bio-based economy in Europe. “However, specific regulations like the single-use directive fail to acknowledge the potential of biodegradable certified compostable plastics in those situations where EU legislation for hygiene and food contact need to be fulfilled, but where no multi-use options can be deployed,” it said. “Especially since boosting organic recycling is a major pillar of the EU’s circular economy.”

IHS Markit will host a briefing on Friday, Oct. 18, at the K from 8:30 to 11:30 AM in room 1 at the Congress Center to discuss the stringent new plastics recycling targets announced by the EU and their potential impact on the plastics market. Europeans generate 25 million tons of plastics waste annually, according to the EU, but less than 30% of that waste is collected for recycling. The EU’s guidelines for recycling would require all plastic packaging to be 100% recyclable or reusable by 2030, said IHS Markit. An additional proposal seeks to ban single-use plastics (such as wrappers, buds, straws, lids, bags and bottles) by 2021. The EU is also proposing to levy a tax of €800 per metric ton on unrecycled plastics, with the aim of bridging some budget gaps and improving recycling infrastructure.

OPA’s Stephen commented, “The EU has got the idea that the answer is recycling. We agree with a circular economy, but you don’t have to be a genius to know that you can’t recycle or compost something unless you can pick it up. Compostable plastic and recycling as an answer to plastic waste that has escaped into the environment is nonsense.”

According to a recent IHS Markit report on sustainability, "Plastics Sustainability – A Sea Change: Plastics Pathway to Sustainability," global plastics demand will grow from nearly 185 million metric tons (MMT) in 2017 to more than 300 MMT by 2030 fueled by rapidly expanding middle-class populations in China, India and other parts of the globe.

Need for a "differentiated" plastics industry

However, noted IHS Markit, rapidly expanding plastics bans in Europe and elsewhere, particularly for single-use plastics, pose a significant threat to future demand for plastics producers. And the potential exists to cut plastics demand growth in half by the 2030 to 2035 timeframe.

“As announcements of additional polyolefins capacity and images of plastic pollution share the headlines globally, the need for a differentiated and sustainable plastics industry is emerging,” said Nick Vafiadis, Vice President of Plastics at IHS Markit. “The transition from a linear (‘take-make-dispose’) economy to a circular economy (‘recover-innovate-reuse’) represents a shift to ensure industry sustainability and value creation. During the IHS Markit briefing at K-Fair, we will explore the market implications and other forecasts for the various plastics segments.”

While it has taken many years, it is finally being acknowledged by many in the scientific and plastics engineering segments of the industry that some so-called biodegradable plastics (i.e., bio-based plastics) may actually require more resources to produce, resulting in a greater carbon footprint. That is also true for alternatives to single-use plastics such as paperboard, glass and steel.

Additionally, many of the so-called “biodegradable” plastics as well as those that are “certified compostable” require specific composting environments and can typically take more time to break down than claimed. Compostable plastics are not recyclable and require an environment conducive to their breakdown, or “fragmentation,” or they can be landfilled, which is often suggested to keep these biodegradable plastic products from being visible in land or marine environments.

Compostable plastics are not welcome at industrial composting facilities, as many of these facilities have conducted their own “real-world” testing and found they do not really compost (i.e., become soil) but fragment into tiny pieces that remain visible in the compost. Customers purchasing the compost do not like these pieces of plastic in their gardens.

“Plastic bags and food products are vital to people in developing countries to protect their food and water, as they don’t have the luxury to use other materials,” said the OPA. “While we can’t ban these products, we can make sure if they get into the environment they won’t be a problem for future generations, and some countries have made it mandatory to use oxo-biodegradable materials. If you want to use retail bags and other products in those countries, you have to use oxo-biodegradable plastics.”

Symphony Environmental Technologies and its regional distributor (Eco-Polymers) have been awarded a contract to supply oxo-biodegradable masterbatch to Saudi Arabia. Symphony was awarded a SASO Quality Mark for its d2w masterbatch (biodegradable, food-contact approved, recyclable and 1% loading ratio). All factories producing specified plastic products must demonstrate compliance to SASO.

Stephen added that Symphony has some very clever scientists who have invented d2p (design to protect), a family of masterbatches for plastics offering extra protection from insects such as mosquitoes, bacteria, fungi, algae, odor and more. “D2p anti-insect contains a substance that is lethal to these mosquitoes, so if you line your walls with plastic sheeting containing d2p it will kill the mosquitoes, which is better than spraying the puddles.”

Other versions of d2p also help protect food from going bad and being wasted.

Symphony Environmental Technologies’ presence at K 2019 will “provide help for people needing to meet the demands of their customers for sustainability while complying with all legal requirements,” Stephen concluded.