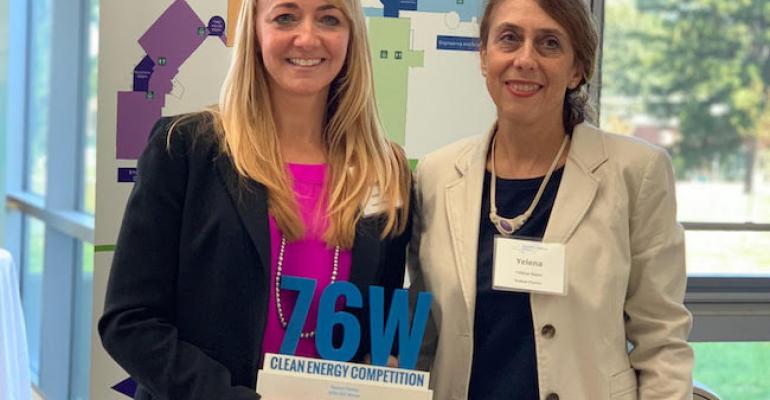 There’s a lot to like about Radical Plastics, a startup based in Beverly, MA, focused on the development of economical biodegradable plastics. First, the founders of Radical Plastics are two women—Kristin Taylor, CEO, and Yelena Kann, CTO—polymer engineers who met while working at Metabolix.

“We’ve both been in the conventional plastics market and worked in efforts to replace persistent conventional plastics with alternatives,” Taylor told PlasticsToday in a phone interview. “It was an uphill battle trying to bring PHA to market, given that it was five to 10 times more expensive.”

The pair left Metabolix in 2013 to begin a project to develop a biodegradable plastic that would actually biodegrade—something they could prove scientifically, not promote through hype. Their work began with polyolefins—PE and PP—with an eye toward developing packaging film.

Kann, PhD, a chemist and plastics engineer specializing in material stabilization, became aware of fine mineral matter, a waste byproduct of the mining industry. While Kann had seen many alternative solutions to biodegradable plastics come down the pike, this was her a-ha moment. She decided to test this fine mineral matter by putting samples of PE film containing a small amount of the matter with a particle size of less than 1 micron out in her backyard. After a few weeks, it had begun to degrade, so Kann folded up the piece of film, put it in a container in her basement and forgot about it.

About six months later, she looked in the container and discovered that the PE film containing the catalyst, through a free-radical reaction, had further degraded into fine, waxy flakes. Testing the flakes, Kann found they had a lower molecular weight and were of a very different chemistry than the original PE. Kann got very excited about the prospects of this material as an agricultural film designed to be plowed into the soil at the end of harvest season.

Based on their experience with polymers, Taylor noted that the agricultural market is the optimal first step in the validation of this product. Radical Plastics is working to achieve third-party validation of their material for meeting the standard for agricultural mulch film’s ambient degradation in soil, which states that the material must physically achieve 90% degradation over a two-year time frame.

The primary benefit of the new material is that most biodegradable or oxo-biodegradable materials degrade to a certain point in the environment but then the process stalls. This can lead to microplastics. The Radical Plastics catalyst drives the degradation reaction to completion. “Our material is a drop-in for the polyolefin world and is different from any other technology out there,” Taylor said.

With just a 0.5 to 2% loading in the PE film, the fine mineral matter proved to be the perfect catalyst for breaking down the ag film farther and better than biodegradable film currently on the market. “We found the ag market makes sense as our material provides a functional advantage,” explained Taylor. “The degradable films currently offered are primarily starch based. They have inferior physical properties and are difficult to handle. We are offering a drop-in replacement for PE with the same outstanding physical properties that makes it easy for the farmer to use.”

Radical Plastics has received a notice of allowance for its first patent, which was submitted in March 2018, but Taylor noted there are more to come as the company’s efforts expand.

Over this past summer, the women quit their full-time jobs and partnered with toll compounder AlphaGary (Leominster, MA) to produce the compounds. “This is not an additive technology but a fully formed pellet ready for processing,” explained Taylor. “We plan to have three grades available for the startup of production. We’ll be extruding a 1-mil black mulch film and 0.75- to 1-mil transparent mulch film starting in 2020, and looking to 2021 to translate this into packaging film.”

One of the primary benefits is that the material can be recycled along with PE, something that Taylor believes is the best end-of-life use for Radical Plastics’ material. She finds the idea of putting biodegradable products in a landfill at the end of their useful life a “huge problem,” she stated.

“We’re designing products to last for hundreds of years, but we also need to design products so that if they do leak into the environment they will biodegrade,” said Taylor, noting that it is not geared toward composting standards. “We can be more intelligent about designing packaging—retaining all the original properties but also making it recyclable.”

Taylor and Kann admit they are being cautious with how they promote their technology to avoid any appearance of hype. “We want to be prepared when we go to the packaging industry that our material is not just fragmenting but actually changing chemically,” said Taylor. “We’re both veterans of the plastics industry and we’ve seen so much of this hype in the packaging world that we’re being very cautious.”

Currently, Taylor and Kann are working with Cornell to do the respirometry testing with its soil science department and also performing eco-toxicity testing. U Mass Lowell, Taylor’s alma mater, is working with them, as well.

Radical Plastics, winner of the 2018 CleanTech Open National Competition and a top finisher in the 76West Clean Energy Competition, was recently named one of CleanTech Group’s 50 to Watch. The annual list catalogs the most promising early-stage private companies delivering high-impact solutions to the challenges of plastics in the natural environment.

Kann and Taylor are excited about their contributions to the plastics industry and the recent recognition for their work. “Plastics are a huge part of our life and bring tremendous benefits,” Taylor commented. “Recognition like this is proof that we can make an impact on the global problem of plastic pollution and that a startup has the potential to change the world.”