Has recycling become the elephant in the room? 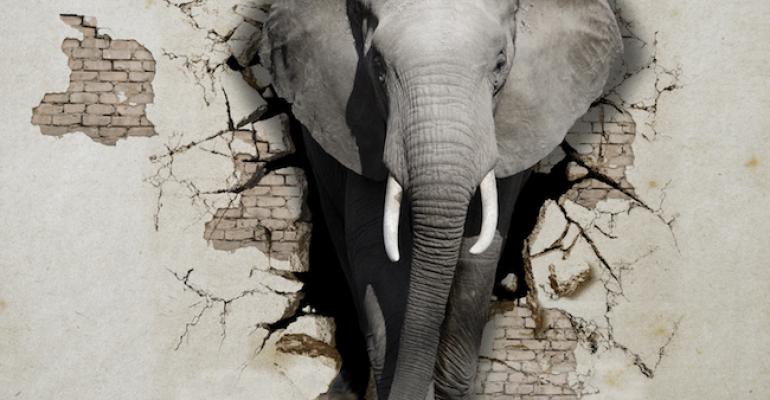 Back in the 1990s, recycling seemed like such a simple, effective way to deal with plastic waste. Today, plastics recycling has become a monster that creates more problems than it solves.

Has recycling become the elephant in the room that everyone talks about but has no idea how to deal with?

Back in the 1990s when I began writing about recycling, it all seemed so simple: Collect it, sort it, send the various sorted materials (plastics, paper, glass and metal) to their appropriate processing plants and voilà! Problem solved!

Here I am some 25 years later and recycling, especially of plastics, has become this monster that has created more problems than it has solved. Is that because no one considered the law of unintended consequences?

Twenty-five years ago, PET was all the rage and used plastic bottles were being gobbled up by recycling centers and sent to carpet manufacturers, clothing makers and other companies that could use lots of recycled PET (rPET).

Demand for rPET became really big for a while in the thermoforming industry, making products that could use a percentage of recycled material and saving on the higher cost of virgin PET. At one time, companies couldn’t get enough rPET. Then the price of PET dropped and suddenly rPET wasn’t so popular; much of it came from China at that time, so it was just easier to obtain virgin PET.

But as we all know, plastic has evolved into many different types of customized materials for specific applications, many containing various additives and colorants. Great care has to be taken in sorting the seven most popular types of plastics and that’s a huge—and costly—problem. Sorting has been done mostly by a manual process—dozens of humans standing next to conveyor belts quickly picking out the various types of recyclable plastics from a waste stream containing paper, glass and metal, not to mention the occasional live python or dead cat. (Yes, really!)

There had to be a better way. The answer was to automate the sorting process. At one time back in the 1990s, a guy here in Phoenix was already thinking about a way to automate the sorting of the different types of plastics. He invited me to come to his garage (a true inventor!) to see his contraption that consisted of a series of hot plates over which a conveyor belt was run. Each hot plate was set to a different temperature, capturing the plastic material whose melt temperature corresponded to the temperature of the hot plate. The plastic would then stick to the conveyor belt while the other plastic materials would move along until they reached the hot plate set to their corresponding melt temperature. I’m not kidding! Well, you gotta give the guy credit for trying.

Automating the collecting and sorting process continues to be the Holy Grail for a lot of companies attempting to solve the problems that surround recycling. In the March 2-3 issue of the Wall Street Journal, journalist Christopher Mims devoted two-thirds of a page to this problem (“The ‘Internet of Trash’ Aims to Sort Out Our Recycling Mess”). He listed all the problems that exist in our industry today when it comes to recycling: Virgin resin that is cheaper than recycled resins; contamination of recyclable plastics that often have to be relegated to landfills; and the higher cost of recycled plastics due to the cost of cleaning the bottles and containers, removing labels and other contaminants (which is why they most often go to landfills). All of this makes recycling, which started out as a simple, good idea, a costly nightmare. It’s turned into the elephant in the room.

Mims’ article deals with many of the various schemes that are being tried, such as Waste Management’s method of using “three different kinds of robots working alongside humans to pull contaminants out of a variety of waste streams,” and “older systems that blow unwanted items off a conveyor belt with puffs of air.” He noted that Waste Management has partnered with a “startup called Compology, which makes dumpsters ‘smart’ by sticking internet-connected cameras in them” to control accidental contamination of recyclables by alerting haulers that the dumpster is contaminated.

Besides robots and vision systems, artificial intelligence is being employed to help with recycling. An article in Forbes from April 4, 2017, noted that in 2011, Finnish company ZenRobotics came up with a system that was “a combination of computer vision, machine learning and artificial intelligence to run synchronized robotic arms to sort and pick recycled materials from moving conveyor belts.”

Others mentioned in Forbes include Sadako Technologies in Spain with its “AI-infused” garbage sorting systems. “Clarke, a recycling robot that uses AI to identify a wide variety of food and beverage cartons so it can grab and separate them from the rest of the recycling” is a prototype that resulted from “a collaboration by the Carton Council and two Denver-based companies, AMP Robotics and Alpine Waste & Recycling.”

In February, I wrote about Bulk Handling Systems (BHS) “In-Flight” sorting technology that can sort plastics by type. A BHS system was installed in CarbonLite’s new Lehigh Valley, PA, facility and will create 80 million pounds of rPET pellets annually.

Of course, there’s the problem of differentiating PVC from PET. One solution is X-ray technology (XRF and XRD), which allows users to “see through” the two plastics at the “elemental level” and sort them. Those methods can also be used to detect additives, such as chlorine and bromine. Brominated flame retardants have become a big no-no, and plastics containing these additives cannot be returned to the re-processing stream for reuse in the food and beverage and medical markets.

Speaking of which, recyclers are clamoring for markets for recycled plastics. Remember the problem of virgin resins being cheaper than recycled resins? Well, it still exists, and the higher the cost to recycle certain types of plastics, the less inclined manufacturers are to use recycled plastics in their products. Mandating specific percentages of recycled content in products through legislation won’t work, and could make things worse. This is a free market economy, after all.

I’m starting to rethink my original conclusion that recycling is a really great idea. More and more, I’m inclined to believe that given the massive problem that plastic waste in the environment has become, waste-to-energy (WTE) is perhaps the best way to deal with this in a large-scale, long-term way. Collection of floating waste could be done by large barges, which would then bring the whole mess to a WTE facility that would then provide electricity to the citizens of countries that need it. Perhaps that’s the best way to deal with the elephant in the room.