BASF can be depended on to present a host of applications and innovative materials when it attends an event, and the Fakuma trade show in Friedrichshafen was no exception. But what was enjoyable to see was that at least one of these was being put to good practical use during the show.

BASF can be depended on to present a host of applications and innovative materials when it attends an event, and the Fakuma trade show in Friedrichshafen was no exception. But what was enjoyable to see was that at least one of these was being put to good practical use during the show.

Visitors to the booth were invited to sit on the "A-Chair," made by the Brunner company, an internationally leading manufacturer of contract furniture.  The chair is made of Ultramid B3EG10 SI (SI: surface improved), one of the four representatives of the new surface polyamide family from BASF for the needs of the furniture industry. First introduced at the K 2013 plastics trade fair in Düsseldorf, this product family combines a high surface quality with the outstanding mechanical and chemical properties of the plastic class, in one case including special flame-resistant characteristics. BASF experts assisted the manufacturer in the design of the office chair with their simulation tool Ultrasim. 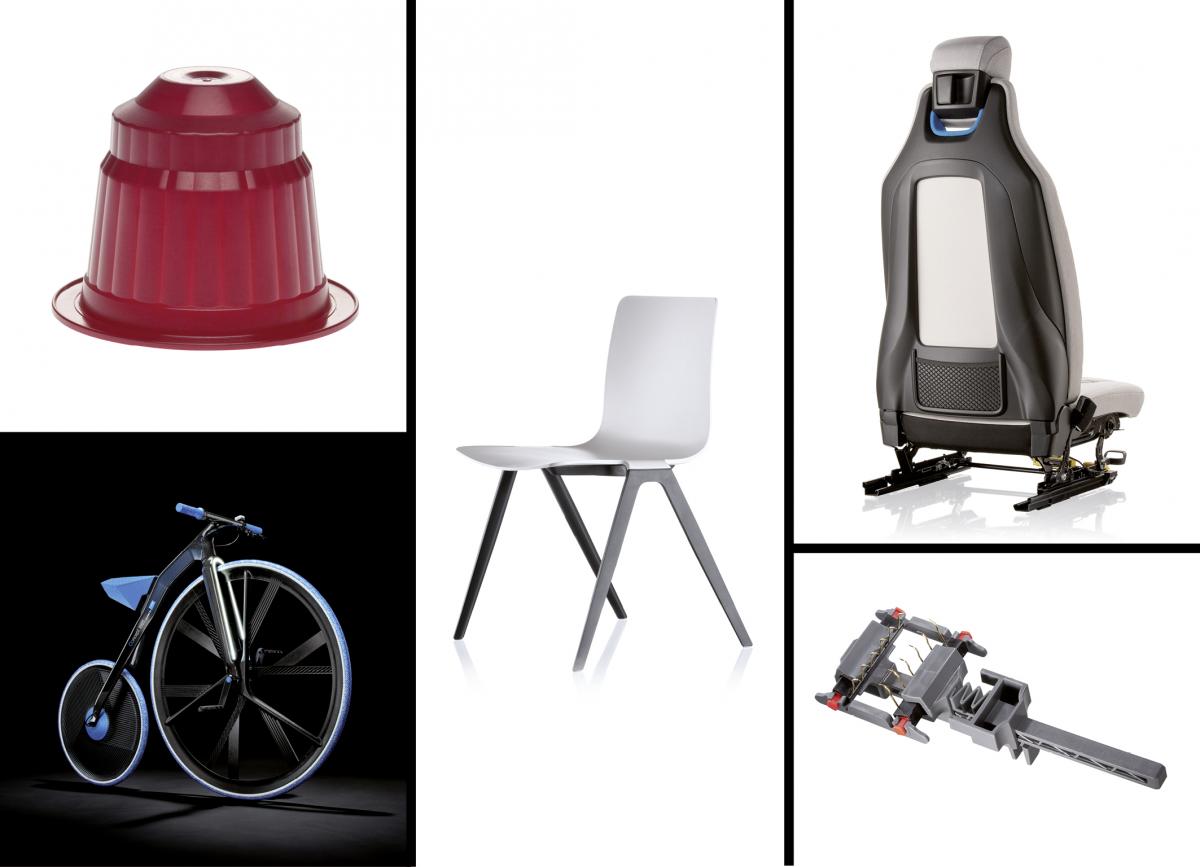 BASF was also showing the first prototypes of newly developed coffee capsules made of a special grade of polybutylene terephthalate (PBT) optimized for the production of airtight coffee capsules that retain the aroma. This means that no aluminum is needed to produce the capsules. The material goes by the name of Ultradur B1520 FC (FC: food contact) and it combines excellent barrier properties against moisture and oxygen. Above all, it is able to contain the aromas, with no need for additional complex coatings - unlike other injection-molded capsules, and multilayered thermoset capsules. BASF is one of the first plastics manufacturers to expand its PBT with a grade that is capable of this.

Injection molding is extremely suitable for manufacturing upscale coffee capsules, with their exacting design. With its food-contact certification, this new grade is suitable not only for coffee capsules but also for thin-walled injection-molded packaging for cosmetics and food products. The first coffee capsule prototypes made of the new material are being produced by CCS GmbH, an independent Munich-based supplier.

An interesting, if somewhat grisly medical application was also being displayed - a new medical instrument made of BASF's Ultraform  (polyoxymethylene) material. Called the Skin Stretcher, the product, from BioWim GmbH is used by surgeons to close large wounds or to treat accident victims. The material was chosen primarily for its ability to reduce friction between touching functional components, the combination of high rigidity with outstanding resilience and its excellent flowability. It also provided demonstrated compliance with international standards for the use of plastics in medical technology.

Also new was a flame-retardant and glass fiber-reinforced polyamide (PA), called Ultramid A3U42G6, featuring easy processing with reduced deposit formation and corrosivity.  The new material meets UL 94 requirements for the V-0 flammability class at wall thicknesses as low as 0.4 millimeters. Its thermal ageing resistance has been considerably improved over that of well-known glass fiber-filled polyamide grades. With an RTI for dielectric strength (UL 746B) of 140 °C at a wall thickness of 0.4 millimeters and even 150 °C at thicknesses starting at 0.75 millimeters, the new Ultramid A3U42G6 is especially well suited for use at higher temperatures.

The new flame retardant system shows no migration effects and thus ensures component surfaces of higher quality. It also contains no halogen or antimony components. This allows favorable smoke density and toxicity values to be attained and also complies with the WEEE and ROHS directives.