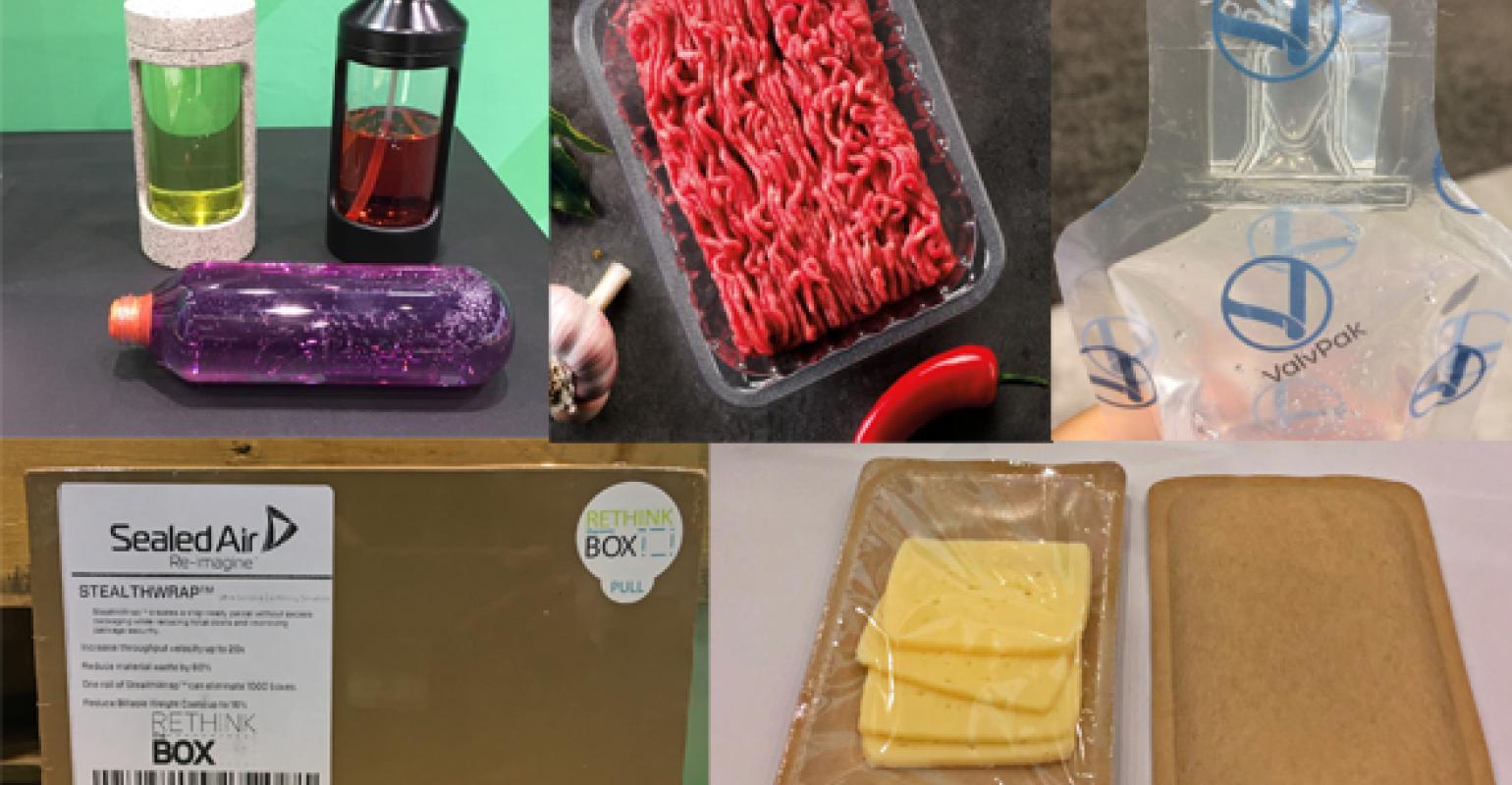 From a new kind of liquid-containing resealable pouch to “stealth” wraps and first-of-a-kind refill bottles for ecommerce and more, plastics played a prominent role at October’s international packaging exhibition. 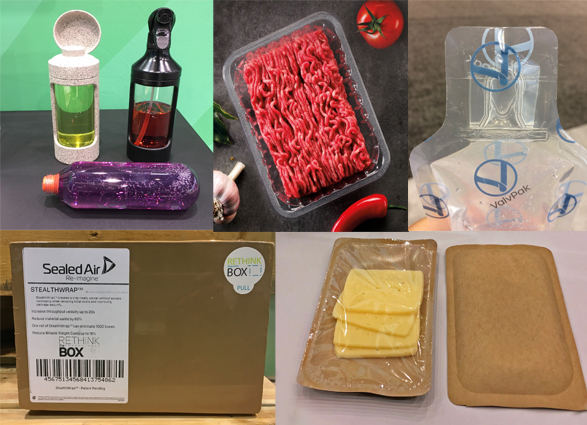 It was an extravaganza of all things packaging including an impressively high level of plastics packaging innovation and product introductions. We’ve distilled an impressive and diverse number of notable developments in retail, ecommerce, beverage, food packaging and other markets down to this listing of five exemplary new products and will be reporting on others just as remarkable in the days ahead.

The list starts with the industry’s first look at the ecommerce-optimized Dromo PET packaging system from PTI (Holland, OH) that launched at the show. 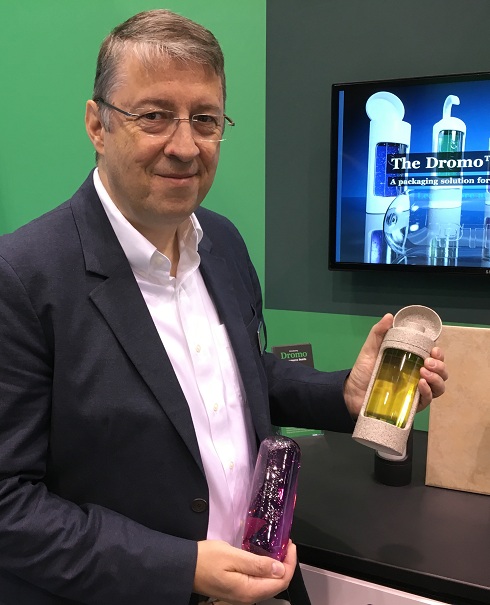 Dromo, which in Greek means road (insider information: the company’s agency person, who’s a long-timer in packaging editorial and marketing, is Greek), is a PET bottle designed specifically for liquid or semi-viscous products sold through e-commerce channels and is suitable for personal care, household chemicals and a wide range of other products.

“Consumers have never been more vocal about reducing plastic packaging consumption,” explains Thierry Fabozzi, PTI president. “Along with this has come the significant shift in buying habits, moving away from retail stores toward ecommerce. Different times, call for different packaging solutions and that’s what this innovation represents.”

The cylindrical Dromo bottle is a cartridge with opposing flat-side panels that provide sidewall strength and facilitate stacking prior to shrink wrapping into optional double packs. Those flat areas prevent the bottle from rolling and offer a landing place for a label. The bottles can be made from virgin PET or up to 100% recycled PET (rPET).

Up to 75% lighter weight than traditional personal-care PET bottles—currently Dromo is 9.6 grams vs. an industry standard 39 grams—the 16-ounce PET refill has been designed to be inserted into an attractive, rigid, reusable dispenser. Several dispenser types have been engineered, each with specific features to address brand preferences.

Bottles can also be sealed with a traditional threaded closure or accommodate a foil seal. 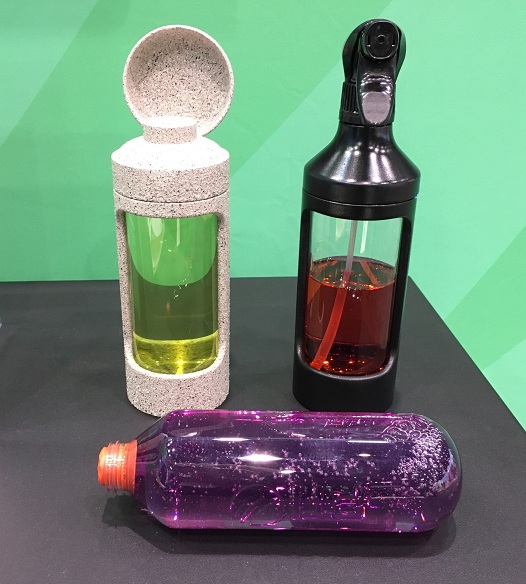 The bottle, which will initially be available in a 16oz size, can be embossed.

The reusable dispenser that PTI displayed in several prototype designs replaces the single-use dispensing bottle used for soaps and other household products.

PTI claims the bottle is a less messy refill system compared to pouches and offers better evacuation of the product than traditional hand-soap dispenser bottles because Dromo is oriented in an inverted opening-down position.

Notably, the expectation is that the secondary packaging requirements for Dromo will also be reduced versus traditional packaging.

The development of Dromo was initiated internally by PTI, which represents a new approach for the company in proactively developing new concepts not tied directly to customer partnerships. Dromo had been in development about a year, according to Fabozzi.

Essentially arriving warm off the blowmolder, the first Dromo bottles that were shown were produced the week before the show. Fabozzi planned to use the show to make connections that would lead to partnerships for Dromo.

Next: Patented FFS resealable packaging for liquids—a first for a familiar name

This contribution is courtesy of my colleague on Packaging Digest, executive editor Lisa Pierce, who uncovered ValvPak, the first foray into liquids by the resealable packaging specialists at Zip-Pak (Carol Stream, IL). 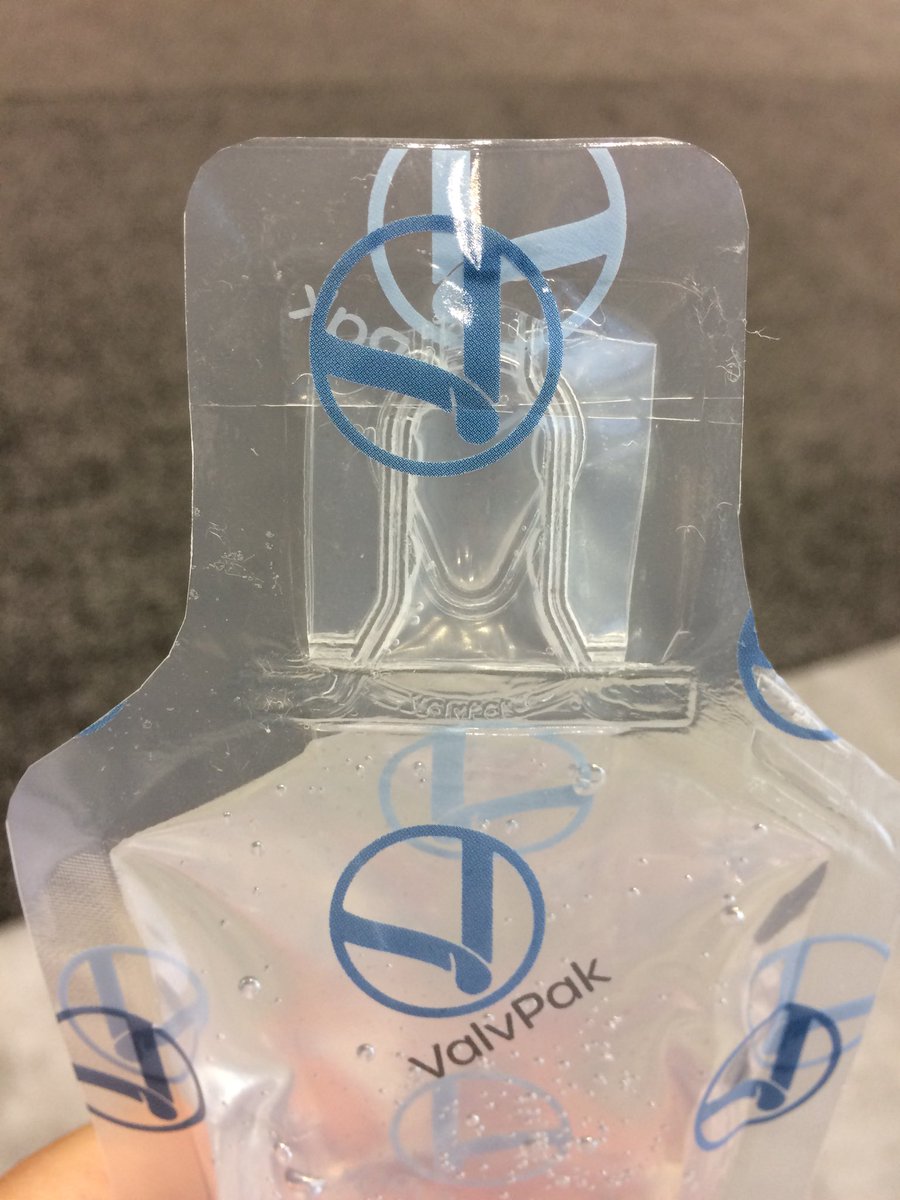 The new and patented flexible valve technology   provides controlled dispensing and spill-proof containment of liquids in flexible packaging. It’s a discrete flexible valve that yields when pressure is applied to the product compartment enabling controlled dispensing. When squeeze-pressure is released, the valve reoccupies and closes the dispensing channel. The design is based on a trapped air bubble within layers of film.

“Zip-Pak wants to scale the business,” reports Pierce. “They plan a beta launch in 2019, with commercialization in the second half of the year with a global brand owner in the home care or personal care area.”

It’s also attracting interest in brands involved in ecommerce where, according to Zip-Pak via Pierce, “ValvPak customers centered around ecommerce are looking for less weight, no leakage and concentrated products.”

Food and beverage applications are in the future as well as valved pouches for dosage opportunities, she reports.

Next: Engineered wrap is a stealthy solution that cuts ecommerce waste

Package transparency is a growing trend in retail packaging that pairs neatly with consumers’ desire for figurative transparency in ingredients for the products they consume.

However, there are occasions in ecommerce that call for maintaining consumer privacy that’s typically met by the ubiquitous outer corrugated box that hides and shelters the contents at the burden of that extra layer of packaging. Besides personal products, another example could be a packaged electronics product such as a laptop that might otherwise draw unwanted attention on a front patio and usually requires an added outer box. 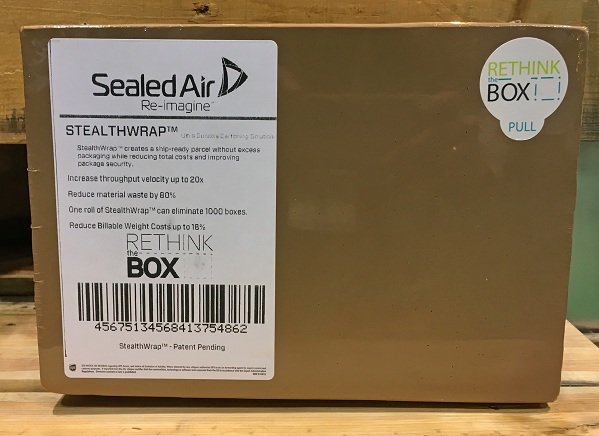 Sealed Air (Charlotte, NC) has a clever film alternative for ecommerce applications that eliminates the need for the outer box to cut excess packaging by 70% to 80% or more and lightens and shrinks the dimensions of shipments. This highly functional shrink wrap for ecommerce ingeniously disguises itself as something else entirely: StealthWrap kraft-look opaque shrink wrap hides the wrapped contents to preserve customer confidentiality and provides protection in distribution.

Even up close the flexible film wrap is difficult to distinguish from a corrugated box; for all anyone knows there could be a bright pink box inside and no one would be the wiser.

StealthWrap permits wrapping speeds to 20 packs per minute versus  traditional corrugated boxes that require up to 60 seconds to assemble, pack and tape.

Surprising technical details that show just what a technical achievement StealthWrap is were shared by Sealed Air post-show: 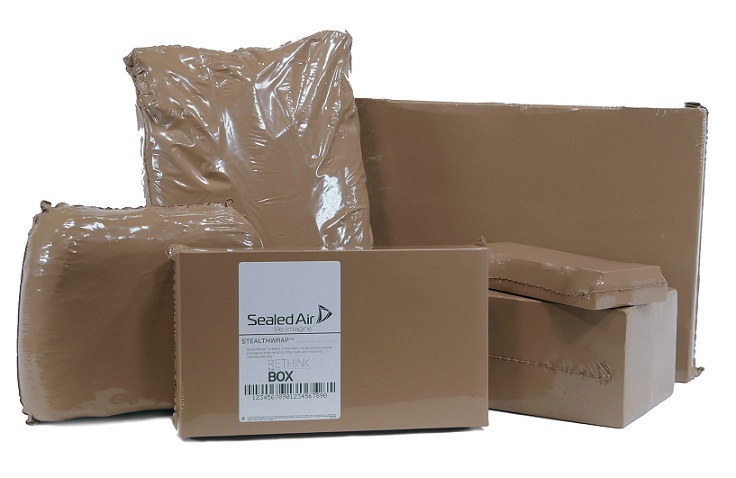 It offers a built-in cost savings: Customers see an average reduction of 18% in billable freight costs, the result of making the parcel lighter and/or smaller in dimension, the company reports.

I wasn’t the only one impressed by the breakthrough: StealthWrap received Diamond Finalist recognition in Dow’s 2018 30th Awards for Packaging Innovation announced in September and was recognized at the show as one of the best packaging innovations for technological advancement, sustainability and enhanced user experience.

It isn’t surprising that since it was introduced about 14 months ago, Sealed Air has delivered enough material to end users in seven countries to account for more than two million parcel packages.

If you have two minutes' time, Sealed Air created an edutaining video  that provides a side-by-side look at the old boxed style delivery vs. the new wrapped method. 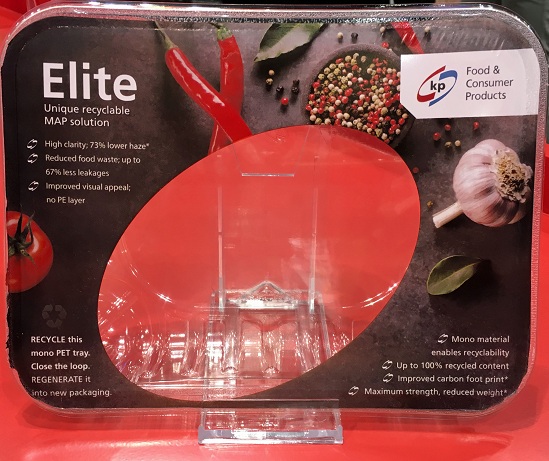 The high-clarity—just 5% haze—PET tray can be thermoformed using up to 95% post-consumer recycled PET and is also 100% recyclable into other plastic food grade packaging, offering a true closed loop supporting consumer goals to be kind to the planet with the circular economy model.

Justin Glass, kp Commercial Director, Americas, says “Imagine being able to help keep PET waste from ending up in an ocean or landfill and instead turn them into trays that can also be recycled.”

Glass tells PlasticsToday that Elite trays are positioned as a more sustainable option to non-recyclable polypropylene trays that use an ethylene vinyl alcohol barrier (EVOH) layer as well as expanded polystyrene trays. “This is a new vertical market for kp,” he points out. 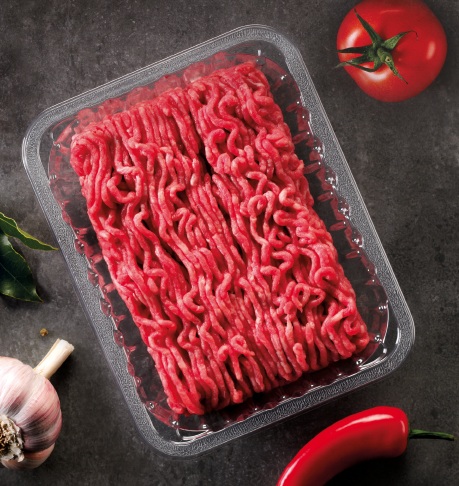 The corresponding lidding film offers high barrier and anti-fog properties for the highest clarity and allows for full-color printing.

The trays are produced in kp’s facility in Montreal, Canada.

The tray represents a technology transfer from Europe, Glass says. “We’re ramping up now for a soft introduction in Q4 2018.” Already, he adds, companies are in beta test.

These sustainably enhanced trays align neatly with the company’s recent #PositivePlasticsPledge (see Unpacking Klöckner Pentaplast’s Positive Plastics Pledge, published  September 2018) in which kp’s  Global Sustainability Director Lubna Edwards stated, “We have pledged to increase our use of post-consumer recycled materials such as rPET to reach up to 100% recycled content in our packaging wherever possible, without contributing to food waste. We have also committed to only use materials that are practically recyclable or made from sustainable sources by 2028.”

Mondi Group (Vienna, Austria) impressed visitors with combination paper and plastic perFORMing shallow tray packaging for food products that offers a barrier and is suitable for cheese, meat and other deli foods sold in supermarkets. Mondi’s breakthrough multilayer formable paper and base material structure eliminates the typical plastic tray to reduce the amount of plastic by 75% while providing a familiar and on-demand natural, eco-friendly look and feel to the packaging with the natural brown kraft paper presentation. The barrier lidding can be obtained Mondi or other source.

From a technical aspect, the tray material allows a highly symmetrical stretch for pleasing uniformity. 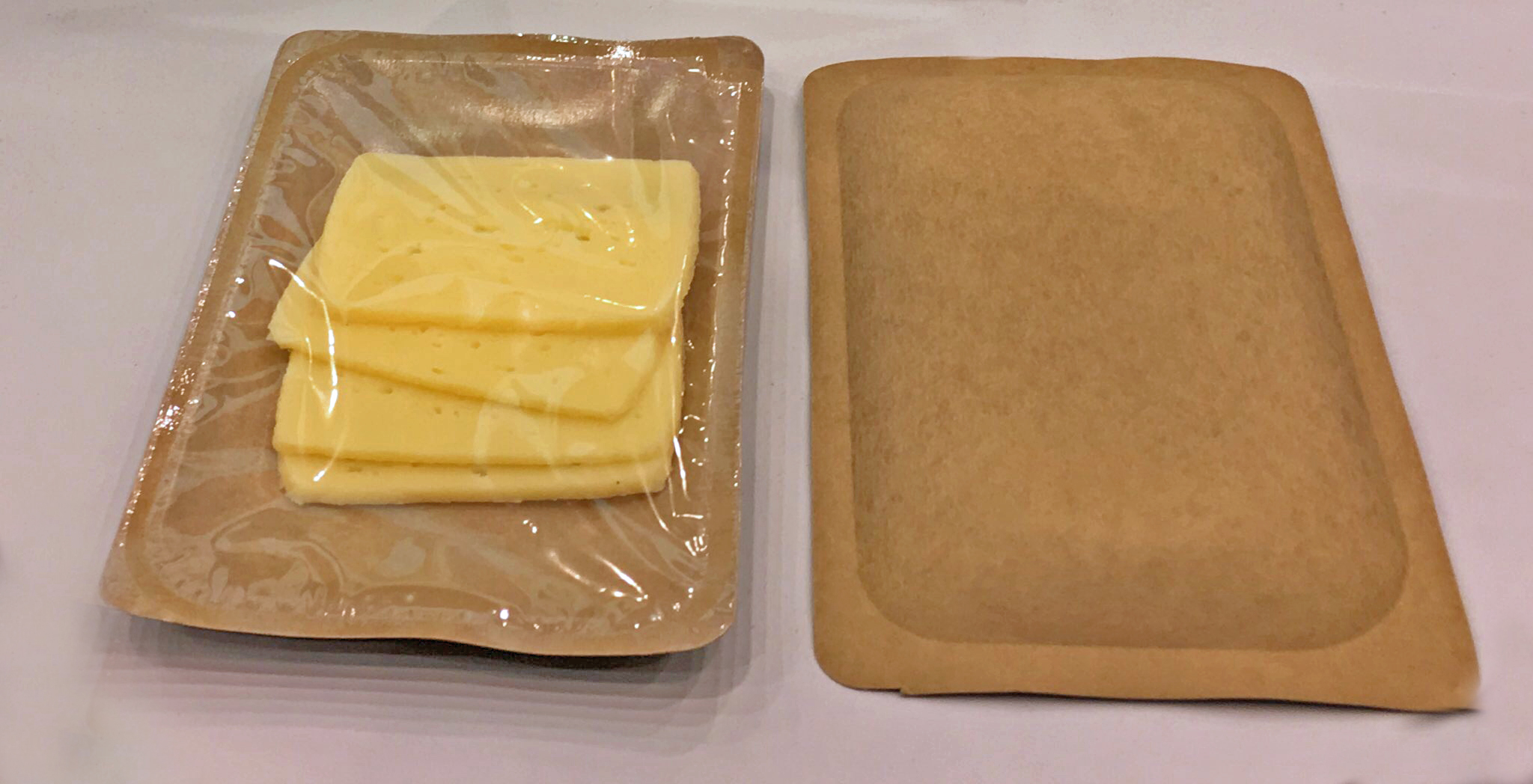 In markets featuring a majority of plastic trays that are typically made of expanded polystyrene, the paper-plastic-hybrid tray provides a distinctive differentiator that can be used on existing packaging lines.

The tray’s paper construction allows an exceptional degree of printability.

The company is licensing the patented technology from partner Packartis of Switzerland, which has considerable expertise in flexible and formable packaging.

Verena Schnedl, Mondi’s Marketing Manager, Extrusion Coatings, tells PlasticsToday that “we now have a certificate from an independent laboratory that rated the material ‘recyclable’. The recycling rate however, of course still depends on the individual waste handling structure of the various cities and counties.”

Schnedl indicated that there’s a lot of interest in the development. “Trial runs are being conducted now,” she added.

Manufactured in Austria, perFORMing trays in rollstock form are available  for trial in Europe and will be shipped to customers in the United States.