Paper straws are becoming ubiquitous from the mainland to the islands 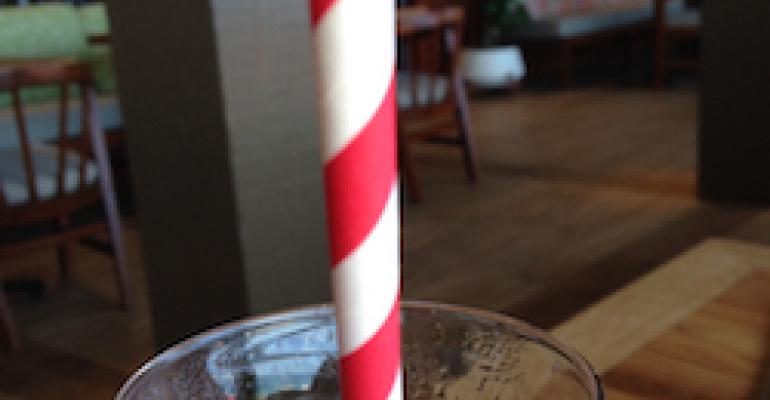 While vacationing in Maui, I ordered a Lahaina Lemonade drink that came with a red-and-white paper straw. Here's the problem: Even when drinking pink lemonade laced with vodka, you could kind of taste the paper. 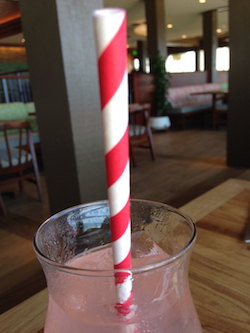 Paper straws have caught on in a big way. My first experience with paper straws came last week while vacationing in Maui with a friend and her 18-year-old granddaughter. Choosing a Lahaina Lemonade drink rather than my usual wine, the libation came to me with a red-and-white paper straw. I took a photo—as any good journalist would do—because, even on vacation, I felt a blog coming on.

My friend’s granddaughter made the first comment after taking a few sips of her non-alcoholic drink: “You can kind of taste the paper,” she said.

After a few sips, I knew what she meant. Yes, you can kind of taste the paper, even when drinking pink lemonade laced with vodka.

Articles I read back home in Phoenix noted how many restaurants in the area have replaced plastic straws with paper ones. Many of the restaurant owners commenting in the various articles said that they gave up plastic because the paper straws are “compostable.”

Well, that’s an admirable goal except for one thing: The composting facility in Phoenix does not accept paper, only food and “green” yard waste (grass and bush trimmings). Touting the fact that your restaurant has tossed plastic straws in favor of paper straws makes you sound green, but if there’s no place that accepts paper straws or plates and cups, you’re not being green. You’re merely adding to the landfill. Using plastic plates and cups means they can be recycled.

At another restaurant, I noticed the straw in my Bloody Mary had a very thick wall section, probably so that the straw would hold up for the amount of time required to sip the drink. Not having any measuring instrument on me, I’d have to guess that the wall section of the straw was approximately 1 mm thick.

Only one restaurant we visited had plastic straws. I won’t mention the name for fear of alerting the straw police.

Santa Barbara, a beautiful city on the ocean in the People’s Republic of California, just banned plastic straws. Anyone caught giving them out could face a “fine not exceeding one thousand dollars” or “imprisonment for a term not exceeding six months.”

Marie McGory, a producer for National Geographic, tried taking a “plastic-free” vacation trip to Belize recently, and wrote of her efforts in “How to Take Your Next Trip without Single-Use Plastic.” She took a “reusable” grocery bag (I’m assuming it was a nonwoven or cloth bag and not a plastic bag, which is also reusable if she’d stop to think about that). She also confessed that she ended up using two plastic straws even though she took a glass straw with her. A glass straw? What about breakage? What about the possibility of dropping it and the glass shards cutting someone’s foot? Tsk, tsk!

I have a better idea: Always pack some reusable plastic grocery bags in your luggage, along with plastic straws so you are always prepared. Paper bags and straws do not hold up well, and are not compostable except in rare cases where a commercial composter might take paper. However, if someone is stupid enough to throw these paper items into the ocean they will degrade . . . in about 90 days.

There is a “reusable” plastic straw on the market—the Tfees straw injection molded from Eastman’s Tritan co-polyester material, which gives the Tfees straw superior clarity for thorough cleaning. It is BPA-free and made in the USA. The Tfees straws are dishwasher safe, ensuring they will keep their sleek look and clarity after repeated washes. The reusable straws are not prone to breakage or splintering and will not absorb any taste or smell.

Tammi Fee, a degreed nutritionist and exercise specialist, developed and patented the Tfees straws. She believes that health is important and that her straws are a sustainable answer to single-use plastic straws. However, what she has encountered in her marketing efforts is the idea that all plastic straws are bad. “I have this hurdle of educating people in sustainable plastics,” Fee told PlasticsToday in a recent telephone interview. In trying to market her product to various restaurants and bars, she is being told that they are going “plastic free,” which means they can’t use her reusable plastic straw, even though it’s an ideal alternative to a paper straw.

Fee said she is also now competing against stainless-steel straws, which “are starting to get traction.” In addition to conducting heat, Fee is adamant against using a stainless-steel straw in a child’s drink that could impale the roof of his or her mouth. “Additionally, you can’t tell if the stainless-steel straw is clean, and like a stainless-steel water bottle, it must be washed out after every use to prevent mold from developing,” she said. “Tfees straws can be washed in restaurants’ dishwashers or put through steam autoclaves. And because they are clear, you can easily see that they are clean and sanitary for reuse. Unlike paper straws, they will not change the taste of your beverage,” said Fee.

Recently, Fee was invited to join an organization for C-level and above business managers/owners, including Richard Branson. The approval committee liked her product and what she was trying to do. However, when Fee offered to provide free reusable straws at a major event for the organization that anticipated 350 people, she was told, “We’d love to have you join us, but we don’t want your plastic straws because this is a ‘plastic-free’ event.”

So, I asked a few restaurant owners how and where they compost their “compostable” paper straws. Only one got back to me. "We do not separate the straws,” he wrote. “I use compostable straws as an alternative to plastic straws, not because I can compost them in the municipal system. I compost all of our kitchen food waste for my personal garden. We recycle glass, some plastic and cardboard. Everything else, including the compostable straws, go to the landfill where they will compost with the other trash. I feel anything is better than plastic straws."

While restaurateurs like the appearance of being “green” and “sustainable,” they aren’t really going to sort out all the paper straws used in their restaurant and try to find a composting facility that will take paper somewhere in the state of Arizona.

It’s just more promotional hype to tout that “we now provide compostable paper straws” without actually composting them. But then the truth is in the semantics: Yes, paper straws are compostable, technically. But they are not composted.  That’s a major difference!