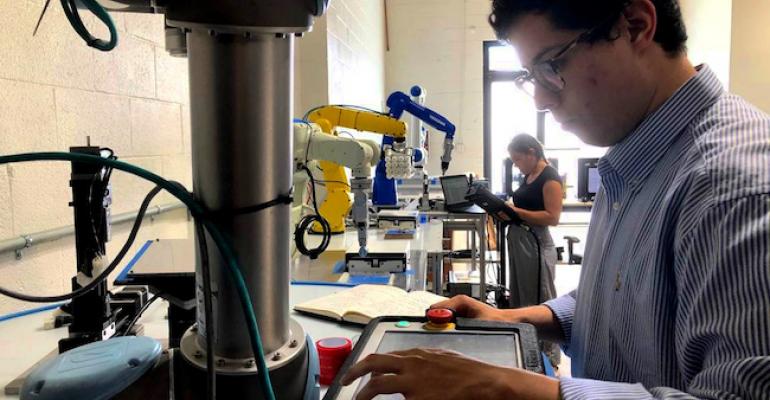 The first thing you notice when you step into OnRobot’s first U.S. R&D-focused office in Culver City on Los Angeles’ Westside is a vibrant mural. It was painted by Karen Dodson, in what has become a tradition for this fast-growing developer of end-of-arm-tooling (EOAT) for collaborative robots, or cobots, as they are often called.

Dodson is OnRobot’s artist not-quite-in-residence, gathering frequent flyer miles as she artistically anchors the company’s far-flung facilities to their local surroundings. For the L.A. shop, Dodson tapped into her knowledge of the local street art scene—she studied art at Cal State Long Beach—to produce the design pictured here. It’s a perfect transition from the deceivingly gritty, graffiti-laced street where the facility is located to the interior of the 6,000-square-foot, industrial-neat space, where OnRobot’s staff are busily developing next-generation EOAT.

I say “deceivingly gritty,” because just a half block away, a massive construction project is underway of a gleaming entertainment and tech industry campus. Ivy Station will be the future home of HBO, Apple and Amazon, and its proximity helped to seal the deal for OnRobot. Ivy Station brings to Culver City a “more qualified pool of candidates for us to choose from when we look at increasing our staff next year,” said CEO Enrico Iversen. “We’re excited to be here and are looking forward to all the great things we’re going to accomplish in this region.”

OnRobot is headquartered in Odense, Denmark, a place that has deep resonance with cobot enthusiasts. Odense is the home base of Universal Robots (UR), the pioneer of collaborative robotics technology. The company’s Chief Technology Officer Esben Østergaard received the Engelberger Robotics Award, which has been called the Nobel prize of robotics, last year in recognition of UR’s development of the world’s first commercially viable collaborative robot. It’s no coincidence that OnRobot has its origins in the same town about 100 miles southwest of Copenhagen.

“I was one of the owners of UR and served as CEO from 2008 until shortly after it was sold [to Teradyne] in 2015,” Iversen told PlasticsToday. “Today we have a purely commercial relationship. And now, we are broadening our focus from UR to all of the collaborative robotics brands,” explained Iversen. “We currently have a sales office in Dallas and sales reps in the Midwest, New England and on the West Coast, and we want to expand our dealer base by 50% by the end of the year.”

OnRobot was founded in 2015, but was officially established as OnRobot A/S in 2018, when it merged with EOAT companies OptoForce in Hungary and Perception Robotics in Los Angeles. Perception notably developed an innovative gecko-inspired gripper in collaboration with NASA. The gripper uses millions of tiny fibers that adhere to flat, smooth surfaces without using compressed air, as vacuum grippers do. Since the merger, that technology is part of the OnRobot portfolio.

Following the merger, OnRobot also bought Purple Robotics and its dual vacuum gripper technology and acquired the rights to the flexible robot technology behind the Ragnar robot from Blue Workforce, hiring nearly half of its employees in the process. If nothing else, this acquisition strategy tells us that OnRobot is driven by a decisive, bold vision that is aligned with the projected explosive growth in the collaborative robotics space.

Market share for collaborative robots is expected to jump 10-fold to 34% of all industrial robot sales by 2025, according to the International Federation of Robotics. With the U.S. facing record low unemployment rates, companies are now turning to cobots to help them automate tedious, repetitive tasks that they can no longer staff.

“Product handling, pick-and-place, machine tending, packaging . . . you name it, wherever humans are involved in your operations, that’s where a cobot can step in,” said Iversen. “Given the labor shortage, if you really want to reshore a lot of manufacturing to the United States, you have two options,” said Iversen. “You can automate or you can bring in a lot of labor. I would bet on automation.”

You know, under present circumstances, I think I would put that at the top of my tip sheet, too.