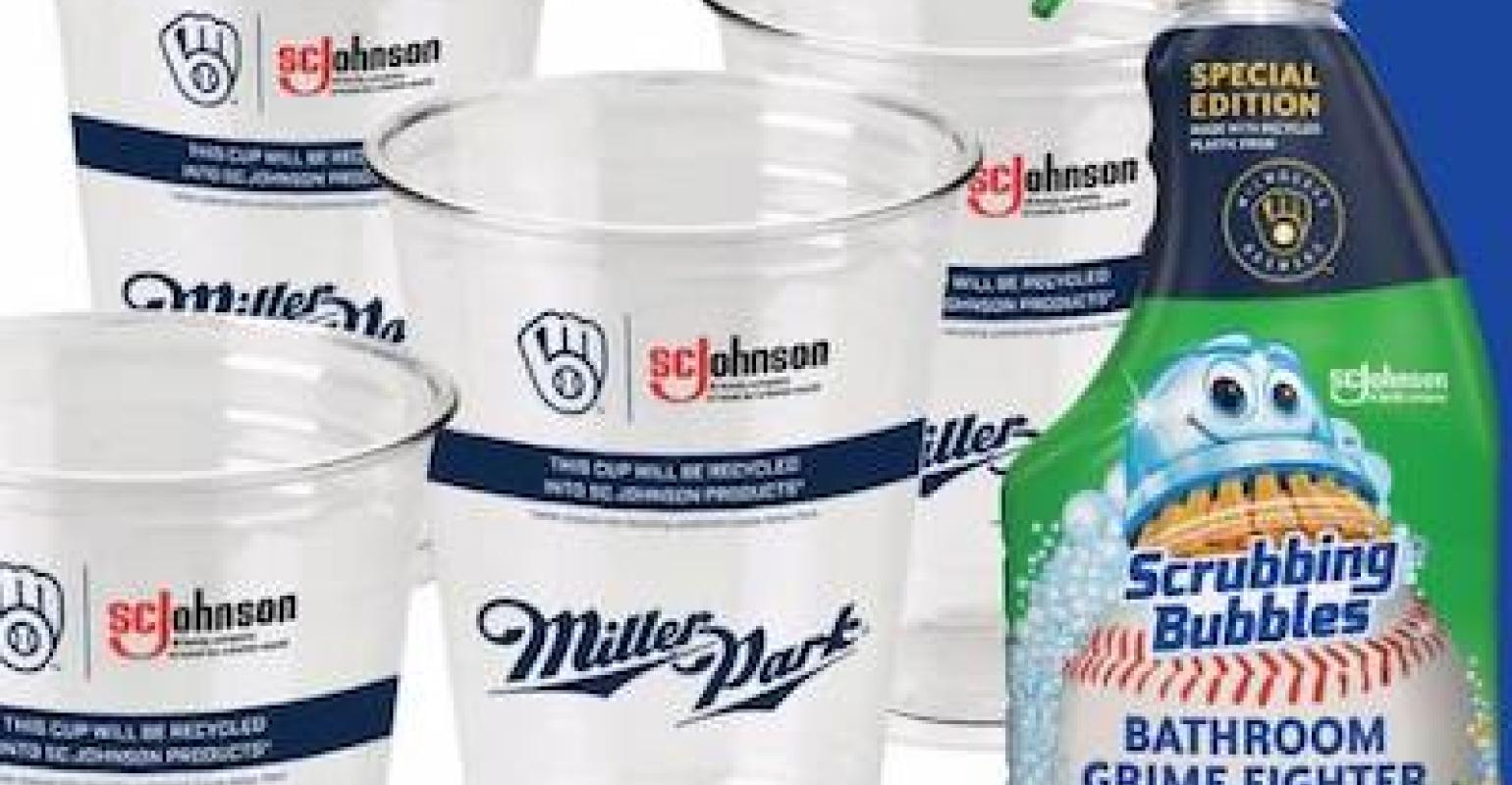 Starting this year, SC Johnson will collect PET-based drink cups during baseball games at Miller Park and use the recycled plastic to produce its Scrubbing Bubbles bottles. 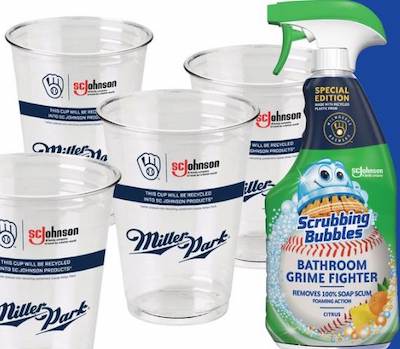 Baseball season is just around the corner, and that means stadiums filled with people who love baseball and beer! In a first-of-its kind partnership, SC Johnson (Milwaukee) is teaming up with the Milwaukee Brewers to create a new market and recycling model for one of the biggest sources of waste at their ballpark—the more than one million plastic cups used each season.

Starting this year, fans at Miller Park will be able to place PET-based drink cups branded with the SC Johnson logo in specially designed receptacles to keep them separate from other waste. SC Johnson will collect the cups and use the recycled plastic in its Scrubbing Bubbles bottles. SC Johnson told PlasticsToday that the process for cleaning, regrinding and pelletizing the recycled cups is being finalized. “We plan to engage with local and regional businesses throughout the process,” said the company.

This is the first U.S. professional sports team to link a waste stream to a specific product, closing the recycling loop and tackling one of the biggest barriers to plastic recycling in the United States and globally—the lack of markets for recycled material. “We all need to work together to help close the plastic recycling loop, and I hope this first-of-its-kind initiative with the Brewers will serve as a model for other major league teams, companies and even other sports leagues,” said Fisk Johnson, Chairman and CEO of SC Johnson.

The partnership officially kicked off on Jan. 24, 2020, at Miller Park, where Rick Schlesinger, Brewers President of Business Operations, and Johnson joined Brewers pitchers Brent Suter and Corey Knebel. Suter, who holds a bachelor’s degree in environmental science from Harvard University, recently launched his own initiative, Strike Out Waste, to help his teammates reduce plastic use inside the ballpark and in their personal lives.

“I’m excited that the Brewers and SC Johnson are teaming up to bring greater awareness to important issues like recycling and ocean plastics,” said Suter. “We can all make a positive impact in our homes, our communities and, with this program in place, we can now make a direct impact at the ballpark.”

SC Johnson and the Brewers will continue to partner throughout the 2020 season, with additional promotions including organized clean-up days and philanthropic contributions with select players for heightened education and awareness. Further, for each save recorded by a Brewers pitcher, SC Johnson and the Brewers will make a donation to the Players for the Planet initiative, which works to reduce ocean plastic.

“The Green Sports Alliance commends the Milwaukee Brewers MLB leadership team and SC Johnson for demonstrating the power of collaboration in creating a closed-loop business model that decreases landfill waste,” said the alliance’s Executive Director Roger McClendon. “This sets a great example for sports and businesses to pause and evaluate the traditional mindset of the ‘make, take, consume, and throw away pattern,’ and move toward a zero-waste circular economy.”

For decades, SC Johnson has been incorporating post-consumer recycled plastic from a variety of sources into its packaging. SC Johnson told PlasticsToday that its objective is “to have the highest amount of PCR possible” in the Scrubbing Bubbles bottles. “We are in the early stages of the partnership and will announce additional details as it unfolds over the course of the Brewers’ season.”

Since 2015, the company has used 100% postconsumer recycled plastic in its Windex line, and last year it announced that Windex packaging would be made entirely from 100% recycled ocean-bound plastic.