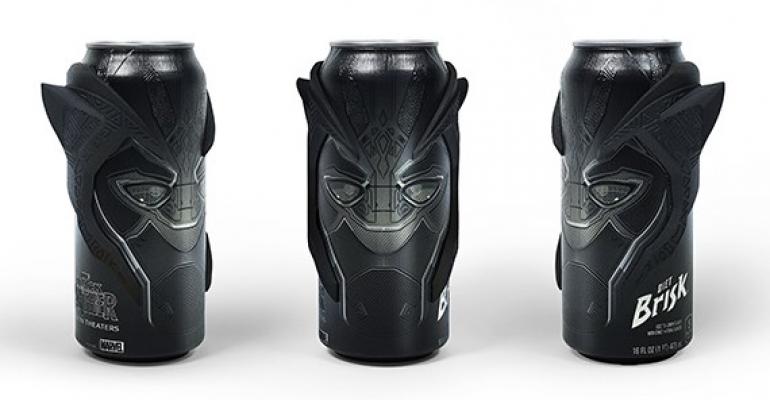 After a visit to the NPE18 booth of Protolabs (Maple Plain, MN) regarding PepsiCo’s (Purchase, NY) promotional Black Panther 3D-printed mask on Brisk tea cans back in May, PlasticsToday report on that development (see NPE2018: The coolest thing we saw on day 2) proved as popular with readers as the movie was with fans. New details on the project, particularly from  PepsiCo's view, were released in a case study that appears here in edited form. 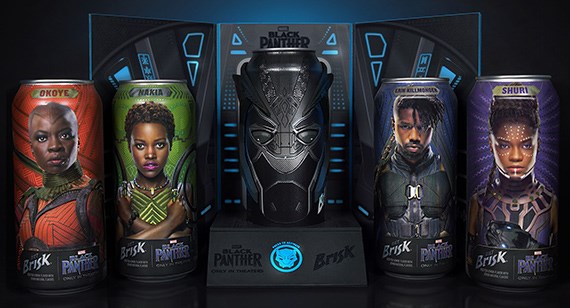 In order to make a splash in the crowded sea of social media, brand giants PepsiCo and Marvel Studios sought to explore new technologies and creative design to augment an online promotional campaign ahead of the Black Panther movie premier. The two companies partnered to develop a limited-edition kit featuring 3D printing from Protolabs (Maple Plain, MN). The kit contained five cans representing each of the movie’s main characters, a Samsung tablet, comic books, behind-the-scenes photos, a light up carton with HiLight smart LEDs, and a 3D-printed Black Panther mask that fit onto the corresponding can.

“Much of this kit was inspired by the costumes and characters from the movie,” said Andrew Phinney, a, R&D packaging engineer at PepsiCo. “This was an exciting opportunity for us to incorporate new technologies to develop unique textures, graphics, dimensional elements, and lighting to bring the kit to life.”

The primary challenge Phinney and his team faced while developing the replica Black Panther mask was determining how to best manufacture the part. The team of designers and engineers sought a manufacturing solution that could produce a highly complex geometry while being economical at low volumes, since they would only need to manufacture 250 parts in total. The combination of these two factors quickly led them to 3D printing.

“Given the detailed features on the mask and the relatively low volumes of parts, we knew early on that 3D printing was going to be the most suitable manufacturing process for this project,” Phinney explained. “The volumes were not high enough to justify investing in an injection molding tool and we liked the design freedom that 3D printing provides.” 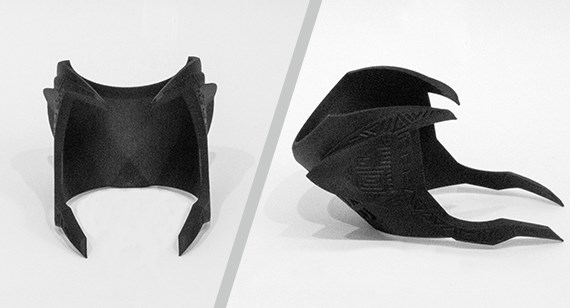 Every detail was critical as they developed the elements included in the kit to look perfect when it was opened up. In-house fused deposition modeling (FDM) machines were used for early-stage prototypes to alter the original mask design so that it aligned with the artwork on the can and remained secure on the can during shipping. Once these small modifications were made, they began assessing various 3D printing technologies to be used for higher quality prototypes and eventually production.

Phinney noted that while researching suitable production-grade 3D printing processes, they considered five technologies in total, which included: selective laser sintering (SLS), stereolithography (SLA), PolyJet, continuous liquid interface production (CLIP), and Multi Jet Fusion (MJF). Ultimately, he and his team decided to build parts with SLS, CLIP, and MJF to better understand each processes’ capabilities and determine what would be best for the project.

Adapting the design of the plastic test fixtures for insert molding required only minor tweaks, Murray said. He based the changes on feedback from Protolabs’ design for manufacturability (DFM) analysis and a conversation with a Protolabs engineer.

Multi Jet Fusion to the rescue

After evaluating the physical prototypes produced by three 3D printing technologies, the team chose to move forward with MJF due to its low cost, surface finish quality, and resolution, which precisely replicated the fine features in the mask design.

Multi Jet Fusion was chosen for the final part as it had the precision necessary to replicate the mask’s fine features and a deep black color that would last for several years.

“When we received the Multi Jet Fusion part it was clear that this technology was going to meet the cosmetic requirements we outlined at the beginning of the design process,” said Phinney. “Not only did the part look great, but it was also the most affordable process among the final three technologies we considered.” 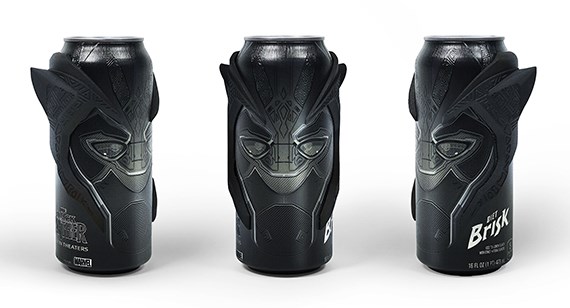 He went on to explain that durability was another factor that led them to choose MJF. “Since the can was meant to be a collector’s item, we wanted a part that could last 10 to 20 years. While other processes like SLA and PolyJet have high resolution, there was no guarantee that they would hold the deep black color and be able to last for several years.”

With final parts in hand, the promotional kit was assembled and put through the company’s distribution testing to ensure it could withstand the rigors of shipping. After a series of vibration and compression tests as well as drops, they found the mask remained secured on the can and were assured the kit would arrive in its intended configuration.

As the “Black Panther” premiere drew near, PepsiCo put the finishing touches on the promotional kit and sent it out to hundreds of online influencers and others involved with the creation of the movie. The campaign resulted in numerous posts on Twitter, Instagram, and YouTube and received more than 10 million social media impressions.

Phinney said the full kit was conceptualized, engineered, and produced in less than six months to align with the movie release and holistic marketing campaign. Protolabs’ quick turnaround times enabled them to meet their ambitious deadlines.

“We needed a supplier that could meet our deadlines and Protolabs provided us with quality 3D-printed parts on time throughout the project,” said Phinney. “The success of the Black Panther mask not only demonstrates Protolabs’ capabilities, but the potential of 3D printing to advance packaging design.”