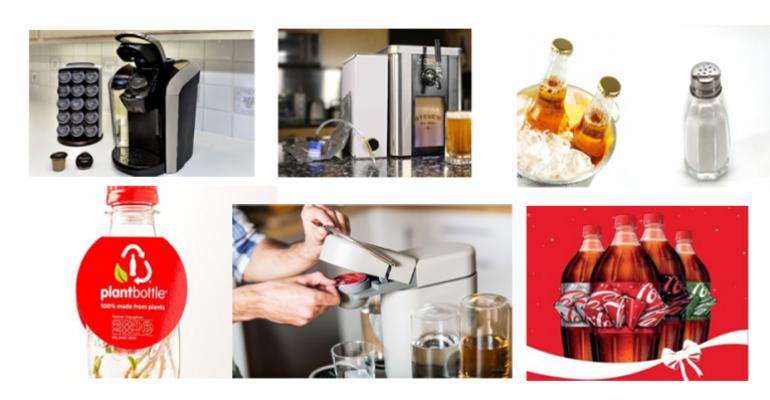 Over the past year, there have been a plethora of innovative plastic packaging designs that drew in our readers. Taking a look back at some of the exciting innovations we covered at PlasticsToday, I found that all of the most read articles in the Packaging Channel have one common denominator—they’re beverage-related. No surprise there.

Over the past year, there have been a plethora of innovative plastic packaging designs that drew in our readers. Taking a look back at some of the exciting innovations we covered at PlasticsToday, I found that all of the most read articles in the Packaging Channel have one common denominator—they’re beverage-related. No surprise there. After all, according to a recent report from BCC Research, the food and beverage packaging markets will continue to sustain growth primarily due to the promising innovative packaging technologies such as interactive packaging, biodegradable packaging and edible packaging, all of which can help decrease the impact of the global burden of plastic waste.

As 2015 draws to a close, we’ve decided to revisit the top six design articles that have been the most popular. So here they are listed in descending order. Enjoy!

Along the Texas-Mexico border, dressing up your beer is quite the thing to do among locals and it’s gaining in popularity, too, according to Texas bar owner Tim Wilkins, who said his staff will garnish the rim of more than 500 beer bottles with salt on a typical weekend evening. However, it’s not without its challenges. So, with the help of a patron, Wilkins built a customized plastic injection molded prototype called The Dressit, a salt applicator that is designed to dress the beer quickly. Read more

5. The first compostable coffee pod coming to a Keurig near you

It seems like every household and workplace these days has a Keurig coffee brewing maker. The morning staple is quick, convenient and practically has zero clean-up, however, what about those K-Cups? Once you pop, sometimes it’s just too hard to stop and these can start to make a dent in your garbage footprint. UPAC2 Inc. (Minneapolis, MN) has addressed this consumer issue with the launch of its environmentally-friendly K-Cup for the popular machine. Read more

During the World Expo in Milan, The Coca-Cola Company (Atlanta, GA) introduced its very first PET bottle entirely made from renewably sourced materials. This newest version of the company’s PlantBottle packaging is said to be based on the successful application of “groundbreaking” technology to create a fully recyclable plastic bottle made from renewable plant materials. Read more

For the holidays this year, following on the heels of its Christmas truck on-pack promotion, nationwide truck tour and ‘Holidays are coming’ TV campaign last month, Coca-Cola’s portfolio of 1.75 liter products will be wrapped up for Christmas with a new limited edition on-pack bow-design. While the label looks at first like every other Coca-Cola label, except with winter snowflakes on it, there is more to it than meets the eye. Read more

2. The booze version of Keurig, but with recyclable pods

Single-serve machines have just gotten a bit more grown-up with the latest addition to the market—the Bartesian. The Canadian mixed cocktail machine eliminates the time spent mixing up drinks so hosts can spend more time with their guests instead of in the kitchen slaving away. Read more

For all those craft beer lovers out there, you know what it’s like to bring home a growler of beer only for it to go flat within a matter of days. Now you can bring your beer home and have it on draft while it stays fresh …in a plastic bag. Thanks to St. Louis-based Synek, there is now a standalone home appliance that refrigerates, pressurizes and dispenses beer for the home consumer. The countertop beer dispenser has a custom-engineered flexible pouch that holds and preserves a full gallon of beer. The pouch is the result of a year-long collaboration involving Synek and Mondi’s Consumer Goods Packaging (Jackson, MO) business in North America. Read more