Market overview: The spot market remained active last week with numerous transactions concluded and prices generally under pressure. Spot-trading platform, The Plastics Exchange (TPE) noted that buyers and sellers were prevalent as double-digit price increase nominations stoked volatility and trading opportunities. Although $0.11/lb of polyethylene (PE) price increases are technically on the table for January, only $0.05/lb is realistically sought and even that now seems doubtful.

Market overview: The spot market remained active last week with numerous transactions concluded and prices generally under pressure. Spot-trading platform, The Plastics Exchange (TPE) noted that buyers and sellers were prevalent as double-digit price increase nominations stoked volatility and trading opportunities. Although $0.11/lb of polyethylene (PE) price increases are technically on the table for January, only $0.05/lb is realistically sought and even that now seems doubtful. January polypropylene (PP) contracts will however, settle on average $0.17/lb higher along with the same change in polymer grade propylene (PGP) monomer. 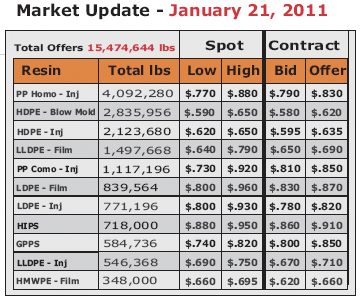 Energy markets moved sharply in opposite directions and rollover to the March futures contract has begun. March crude oil futures reversed the previous week's gains, falling $3.46/bbl to finish at $89.11/bbl, their lowest close in 5 weeks. March natural gas futures jumped $0.253/mmBtu to settle at $4.743/mmBtu on Friday-the highest close for a front month since July. The crude oil : natural gas price ratio contracted to less than 19:1 for the first time since September.

Ethylene's spot market traded a bit higher, as several deals closed for January delivery, which were priced on either side of $0.43/lb. The week's final trade was $0.4275/lb, up $0.005/lb. Ethylene transactions for February delivery, as well as for deferred months throughout 2011, were also concluded at a slight discount to prompt prices. Overall Gulf-area ethylene production is strong, with just one major facility currently under repair.

Polyethylene (PE) spot availability remained healthy last week, and the prospects of implementing a January price increase diminished. Spot PE prices were steady to $0.01/lb lower and demand was subdued. The PE market lost its momentum in December amid weakening spot ethylene costs. When producers failed to secure the $0.05/lb December price increase, processor demand slackened and upstream resin inventories bulged above 3 billion lb. Receding ethylene monomer costs and better resin avails through January have "kept a lid" on the spot PE market, according to TPE CEO Michael Greenberg. While the market is not awash in resin, supplies for most PE grades can be sourced , or at least bagged in Houston, which is also a sign of a difficult spot export market. Packaged material and offgrade railcars are priced around steady for the month, although producers have not yet given up on their January price increase effort.

Propylene was relatively active with a number of transactions seen at, and then below, the previous week's price. Production issues are resolving, which is taking a little upward pressure off the PGP market. The week's final trade was reported at $0.765/lb, down $0.015/lb. High-volume refinery-grade propylene (RGP) trade was not seen. January PGP contracts settled up $0.17/lb to $0.775/lb. RGP is nominally quoted around $0.715/lb, bringing the PGP-RGP spread back in to a more typical $0.05/lb.

Polypropylene (PP) spot prices finally eased a penny after 10 straight weeks of steady gains. The spot PP market had continued a couple cents higher early in the week, but gave back the gains and a little bit more as signs of a "toppy" PGP monomer market began to appear. Spot resin supplies are actually fairly plentiful, but priced mostly in the $0.80s/lb. There are, however, also some special-priced opportunities offered by resellers with old inventory.

Spot PP prices had rallied as much as $0.18/lb over the past two and a half months, nearly keeping pace with the $0.20/lb of price increases during December and January, fully $0.17/lb of which came in January. The market does not appear ready to give back the bulk of the gains, and a small period of heightened prices ironically might be beneficial to many processors, who could use the opportunity to work the huge January price increase through to the finished goods market.

After several months of restricted supply, it is good to see some nice liquidity developing in the spot resin market. This upcoming final week of the month could flush out additional material. High-volume spot exports have been challenged to India and Asia. While some quantity of resin is still flowing to Latin American countries, competitive offers from other regions have limited opportunities.