Market overview: In the face of sluggish demand and light offers, prices advanced in the plastics spot market. Trading platform The Plastics Exchange (TPE) reported that polyethylene (PE) prices rose between $0.005-$0.025/lb, depending on grade, while polypropylene (PP) prices added another $0.01/lb with limited availability. In some cases PP widespec was priced above processers' contract prime prices.

Market overview: In the face of sluggish demand and light offers, prices advanced in the plastics spot market. Trading platform The Plastics Exchange (TPE) reported that polyethylene (PE) prices rose between $0.005-$0.025/lb, depending on grade, while polypropylene (PP) prices added another $0.01/lb with limited availability. In some cases PP widespec was priced above processers' contract prime prices. The spot market remains strong, with PE producers having successfully implemented $0.09/lb of price increases since September. November PP contracts are settling $0.01/lb lower along with polymer grade propylene (PGP). TPE noted that this is a smaller price break than many had anticipated, with fresh price increases for both PE and PP are being talked for December. 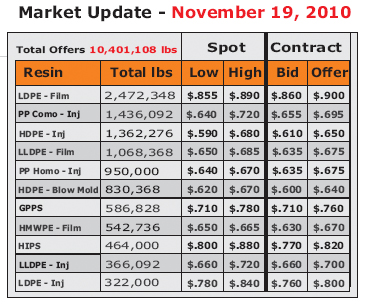 Ethylene's spot market continued to be active, and prices ultimately eased a bit last week. Material traded in all three Gulf facilities with the final transaction in the most active hub at $0.51/lb for December, down about $0.02/lb. Ethylene for delivery in the first quarter of 2011 changed hands at $0.4575/lb, reducing the spot premium from the previous $0.10/lb level. Several downed crackers are back on line, but operating capacity remains below 90%, limiting short-term supplies. Ethylene's net transaction price (NTP) for October was up $0.0375/lb to $0.4275/lb. November has not yet settled, but it will be higher.

Polyethylene (PE) spot prices rallied last week, amid continued supply tightness and feedstock cost pressures. Certain grades such as high-density (HDPE) for blowmolding and injection, as well as linear low-density (LLDPE) butene and hexene posted strong gains, rising as much as $0.025/lb. Other grades like high molecular weight (HMW) and low-density (LDPE) for film, which previously advanced more than the aforementioned, were only modestly higher. High LDPE prices have encouraged international traders to offer imports this week, but, notes TPE CEO Michael Greenberg, "while the supply is welcome; the prices were not overly attractive." In December, producers will look to add to their recent $0.09/lb of price increases, putting forward another $0.05/lb price increase.

Propylene spot transactions showed prices that were steady to higher. Refinery grade propylene (RGP) traded a few times on either side of $0.48/lb. Polymer grade propylene (PGP) traded at $0.57/lb, up $0.015/lb from the previous spot trade. The PGP-RGP spread has moved back out to $0.09/lb. November PGP contracts settled at $0.575/lb, down just $0.01/lb, for a "firmer settlement than anticipated."

Polypropylene (PP) spot prices continued to recover last week, adding another $0.01/lb. The offgrade market has erased much of the discount it built to prime. PP supplies in general have dwindled, and few generic-prime railcars are available in the market. Limited PP supplies and strength in the monomer market have some thinking that spot PP prices will continue higher into December and that a price increase might be forthcoming. The commodity resin market was stronger in November than most market participants expected.