The spot resin markets saw a flurry of activity as April came to a close, with the flow of material called surprisingly good by spot-trading platform, The Plastics Exchange (TPE). The material placed into the market was met with strong buyer interest, and because of this, TPE noted that the ratio of completed transactions to total inquiries was high.

The spot resin markets saw a flurry of activity as April came to a close, with the flow of material called surprisingly good by spot-trading platform, The Plastics Exchange (TPE). The material placed into the market was met with strong buyer interest, and because of this, TPE noted that the ratio of completed transactions to total inquiries was high. Commodity resins continue to rally, and with the April price increases intact, producers have already begun "walking the spot price higher", according to TPE, in support of May nominations. Continued high energy and feedstock costs are providing cost-push support for the increases, but TPE noted that with resin now priced near all-time record highs, "demand destruction is imminent." 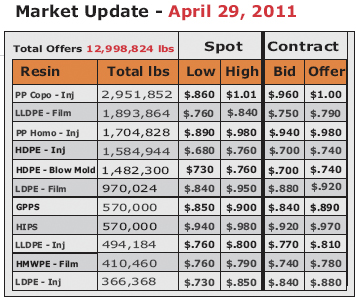 Energy markets: U.S. energy prices rose further, with June crude oil futures adding $1.64/bbl to end the week at $113.93/bbl, while June natural gas futures continued their streak of gains, jumping $0.232/mmBtu to settle at $4.698/mmBtu. With the exception of one day in January, TPE said this was the highest close since August 2010. The crude oil : natural gas price ratio contracted to 24:1, about four times the ratio considered parity.

Ethylene spot prices consolidated with most transactions for April and May delivery posting on either side of $0.65/lb, and the key monomer staying roughly steady for the week after a period of particularly volatile trading. Storm-related power outages led to a fresh spate of cracker disruptions, which further restricted monomer production and brought nearly 10% of capacity offline. Short-term ethylene supplies are tight, contributing to the $0.07/lb premium that material for prompt delivery has over ethylene for the third quarter.

Polyethylene (PE) spot prices rallied about $0.01/lb for the second week in a row, with certain grades, including linear low-density (LLDPE), posting stronger gains. Minimal railcars were offered last week, apart from a few cars controlled by resellers still requiring disposition. Buyers aggressively purchased inventoried resin held by traders, cleaning up much of the well-priced available material offered into the market. The $0.06/lb price increase took hold early in the month for most processors, and it now appears to be fully implemented industry-wide. There is another $0.05/lb increase nominated for May contracts, and an increase of $0.04/lb has already been floated for June.

Propylene finally saw spot trades after a series of ever-increasing bids, with refinery-grade propylene (RGP) transacting several times at $0.91/lb. That price is $0.115/lb higher than the most recent set of trades in early April. Polymer-grade propylene (PGP) has not traded since mid-April, and it did not appear to transact in the spot market again this week. Price increase nominations for May PGP contracts did emerge mostly between $0.075 -$0.09/lb, with April PGP contracts priced at $0.875/lb, $0.15/lb higher than March.

Polypropylene (PP) prices continued to rise unabated, as spot material jumped another $0.03/lb during the last week of April. This as participants positioned themselves ahead of yet another steep price increase. Processors that buy branded prime PP on contract just endured a $0.15/lb increase and are now facing another $0.075 -.09/lb hike based on PGP contract nominations. Fresh prime PP railcars should be priced over $1.00/lb. "Those that need to buy will have to pay up," said TPE CEO Michael Greenberg, "but at these levels processors are procuring as little as necessary." Demand is clearly hurting, and the spot PP market has been unable to keep pace with rising contracts. Although the volumes are relatively low, offgrade PP is still priced mostly in the higher $0.80s/lb to lower $0.90s/lb basis Houston, which is under the current cost of monomer.

Commodity resin prices rose sharply in April and could move higher again in May as resin producers look to pass along their rising energy and feedstock costs. Domestic demand could suffer at these stratospheric price levels, as processors look to buy only as needed. Much of the spot export market, with the exception of Latin American countries, has already been shut off. Chinese demand is in question as deep sea cargoes originally destined for Asia are re-sold to Latin America and Europe, hurting U.S. export opportunities. However, the domestic market is not yet providing signals that a price break is around the corner.