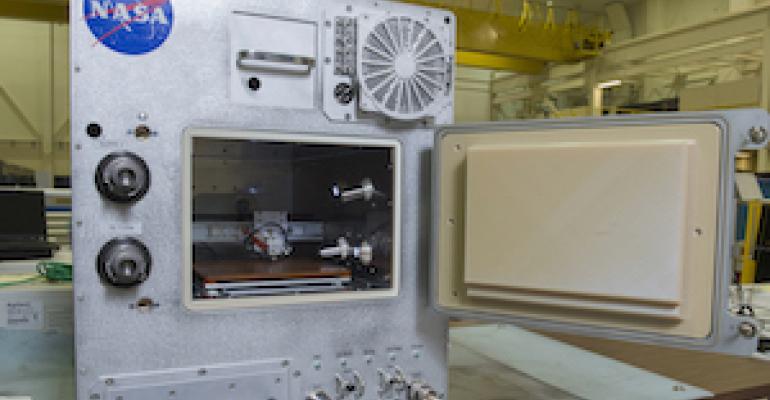 The Refabricator is part 3D printer, allowing astronauts to make tools to spec immediately, and part recycling machine that can recycle the things it has already printed and turn them into new parts. 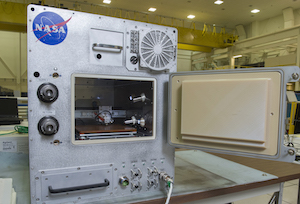 While the International Space Station (ISS) has had a 3D printer on board since 2014, Northrup Grumman’s Cygnus spacecraft, launched in November 2018, just delivered a number of new experiments and cargo. Among the cargo was the Refabricator, a machine that will accept plastic materials of various sizes and shapes and turn them into the feedstock used to 3D print items, according to a NASA press release. The whole process happens in a single automated machine about the size of a dorm room refrigerator.

“When we begin launching humans to destinations beyond low-Earth orbit, space will be at a premium,” said Niki Werkheiser, Manager of In-Space Manufacturing at NASA’s Marshall Space Flight Center in Huntsville, AL, where the device was tested before being sent to the space station. The Refabricator eliminates the need to send new tools and replacement parts to the ISS via other spacecraft, which means no waiting. “Resupplying from Earth is cost and time prohibitive,” Werkheiser said.

The Refabricator is part 3D printer, allowing astronauts to make tools to spec immediately, and part recycling machine that can recycle the things it has already printed and turn them into new parts. It can also recycle other plastics, such as the foam and plastic shipping materials NASA uses to package cargo for the trip to the ISS. “The Refabricator will be key in demonstrating a sustainable logistics model to fabricate, recycle and reuse parts and waste materials.

Typically, 3D printers cannot reuse materials from components already printed because the properties of the material are weakened. The Refabricator, however, uses a different printing method and can reuse the same material many times without losing the material’s integrity.

NASA awarded a Small Business Innovation Research contract valued at approximately $750,000 to Tethers Unlimited Inc. (TUI) of Seattle in April 2015 to build the recycling system. “The Refabricator demonstration is a key advance toward our vision of implementing a truly sustainable, in-space manufacturing ecosystem,” said Rob Hoyt, CEO of TUI. “Astronauts could use this technology to manufacture and recycle food-safe utensils, and turn what is now inconvenient waste into feedstock to help build the next generation of space systems. We believe re-using the waste could reduce the cost and risks for NASA and private space exploration missions.”

The Refabricator will be the first integrated recycler-manufacturer in orbit and may eventually be able to recycle and print metal as well as plastic, with very little monitoring from the station crew members. Currently, almost all operations are remotely commanded and controlled from Marshall’s Payload Operations Integration Center—mission control for science on the space station—and TUI.

By 2020, NASA wants to create a fabrication laboratory, or FabLab, to test an integrated, multi-material, on-demand system. “The FabLab would allow astronauts to select what they want or need from a catalog of parts and then simply push a button to have it made,” said NASA’s Werkheiser.

This project is an ideal example of how government and small businesses can effectively work together. In this example, NASA and TUI worked hand-in-hand in the rapid development of a brand new technology for in-space applications. NASA provided guidance and insight on how to design the system to successfully meet the stringent space fight certification, safety, and operations constraints.

“The space station is the ideal proving ground for this important technology,” said Werkheiser. “Astronauts are already living and working in space, a mere 250 miles above Earth. Those crew members are helping make discoveries to benefit humans around the world while testing the important technology, life support systems and medical breakthroughs that will enable long-duration space exploration by humans.”