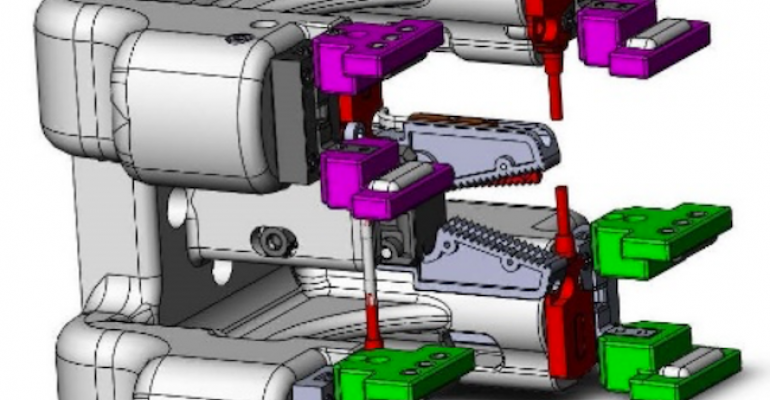 In addition to reducing tooling weight without sacrificing strength or durability, 3D printing allows Savage Automation (Salt Lake City) to mount hardware more efficiently and route vacuum and electrical connections through the tooling body rather than strapping them to the frame.

The factory of the future, when you really think about it, is the factory of today for any manufacturer that is serious about thriving in a competitive environment. In that paradigm, automation is a central organizing principle. Startup company Savage Automation (Salt Lake City) has keyed in on optimizing one of the core functions of automation—gripping and positioning parts—by building a better end-of-arm tool (EOAT).

Richard Savage had more than 10 years of experience in injection molding and tooling under his belt before founding Savage Automation in 2017. Working for companies such as Ultradent, Berry Manufacturing and Merit Medical in positions ranging from process and mold technician to mold manager had him “trouble shooting robots and end-of-arm tooling and being frustrated by poor end-of-arm design and components,” Savage told PlasticsToday. “I started Savage Automation to build a better product, embrace new technology and feed my need to build things.“ EOAT specifically captured his attention because the tooling tends to be heavy and cumbersome since it is traditionally made from extruded or machined aluminum. Savage saw additive manufacturing, aka 3D printing, as the perfect technique to optimize EOAT design.

In addition to enabling tooling weight reduction without sacrificing strength or durability, 3D printing allows Savage to mount grippers, sensors and suction cups more efficiently and route vacuum and electrical connections through the body of the EOAT rather than strapping them to the frame. By simplifying setup, Savage was able to reduce changeover times and minimize potential damage to the tooling and parts. Because 3D-printed tooling is lighter than conventional components, there also is less wear on servomotors and robots can operate faster while producing less vibration, he said.

Savage started out using carbon-fiber-filled nylon 12 CF from Stratasys to fabricate the tooling, and still uses it on occasion because of its durability. His material of choice today, he told PlasticsToday, is 40% glass-filled nylon 12 that he prints on an HP Multi Jet Fusion system.

While Savage Automation is less than two years old, it already has built up a loyal industry following, which is not shy about singing his praises.

Jason Cornell of Wittmann Battenfeld points to lightweighting of EOAT as a “big advantage when you may already be pushing the payload limits of a robot. I also like that you can create channels within the printed tools to route cables and tubing. This provides a ‘cleaner’ [design] that can help prevent snags during wrist rotation, as well as when entering tight mold spaces,” said Cornell.

The reduced weight of 3D-printed tooling also “starts the conversation about the possibility of adding more options to the EOAT,” said Andrew Rajkovitch of Ponderosa Plastics. “You can really go over the top with part verification and detection [systems] and it provides unlimited possibilities for internal pressurized air, water and vacuum passages,” said Rajkovitch.

Turnaround time is cited as a huge advantage by Dave Conrad at Pyramid Mold and Tool. “With the 3D-printed EOAT, we can go from concept of design to the finished product in the press in a fraction of the time that it would take to manufacture a machined EOAT,” said Conrad. Consolidation of air lines and hardware in the tool design results in fewer components, “making the EOAT thinner, lighter and less bulky and, thus, requiring less daylight in the press and giving the molding house a faster cycle time,” added Conrad.