An above-average flow of material was met by more willing buyers last week in the resin spot-trading market, with widespec pricing slipping further on more aggressive offerings. Spot-trading platform The Plastics Exchange (TPE) noted that some "storm soaked material" began to crop up in the market in the aftermath of super storm Sandy. Spot exports to regions outside Latin America remain challenging, according to TPE.

An above-average flow of material was met by more willing buyers last week in the resin spot-trading market, with widespec pricing slipping further on more aggressive offerings. Spot-trading platform The Plastics Exchange (TPE) noted that some "storm soaked material" began to crop up in the market in the aftermath of super storm Sandy. Spot exports to regions outside Latin America remain challenging, according to TPE. Producers have nominated a $0.05/lb increase for November polyethylene contracts, while seeking as much as $0.07/lb for polypropylene (PP). 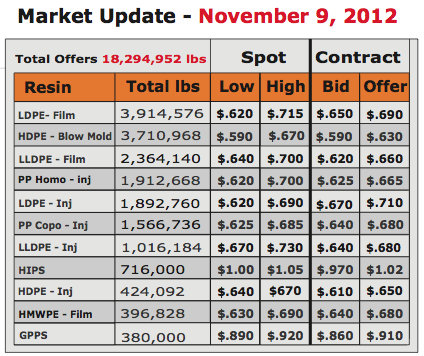 Energy markets finished mixed after what TPE CEO Michael Greenberg called "an interesting week of trading." December crude oil jumped $3/bbl, reaching above $89/bbl ahead of the U.S. presidential election, before plummeting $5/bbl in its aftermath. Crude then rallied a couple dollars last Friday to settle at $86.07, a net gain of $1.23/bbl. December natural gas was more subdued, bouncing between $3.50-$3.60/mmBtu before ending the week on the low-end at $3.503/mmBtu, for a loss of about a nickel. The crude oil : natural gas ratio expanded slightly to 24.5:1, about four times the 6:1 level considered parity.

Ethylene's spot market was quiet, as prices edged a half-cent higher on limited transactions and volume. A few crackers are still down for planned and unplanned maintenance, but the market seems fairly well balanced despite the reduced capacity. November ethylene last traded at $0.55/lb; the forward curve was nominally marked a little higher, with material for delivery 12 months out marked at a nickel discount to spot. Ethane slid a penny to $0.2975/gal ($125/lb).

Polyethylene (PE) spot availability continued to improve, with widespec railcars more plentiful. Generic Prime, which was already packaged in Houston, was steady to a penny lower, with railcars available, but priced to reflect the third attempt to implement the $0.05/lb increase. Processors intend to resist once again and are actually hopeful for a little contract price relief, according to Greenberg. "Domestic resellers and exporters are generally eager to move uncommitted inventory and make room for opportunistic purchases if deals are presented closer to year-end," Greenberg said.

Propylene's spot market was more active and prices slid on better volume. Polymer grade propylene (PGP) for November delivery ended the week around $0.555/lb, down about a penny. A $0.07/lb increase was nominated for November PGP contracts, but spot material is trading less than $0.03/lb above October levels. Refinery grade propylene (RGP) was essentially steady, priced just north of $0.50/lb. Overall refinery output remains constrained due to Hurricane Sandy. The PGP market continues to price future months at slight premiums until $0.025-.03/lb is reached 12 months out.

Polypropylene (PP) spot prices eased a half-cent, giving back a third of the previous week's gain. Although November contracts are poised to jump a chunk of the $0.07/lb increase nominated for PGP monomer, ample resin supplies and dull demand are currently limiting spot market gains. Several PP producers are looking to change the basis for their 2013 contracts, trying to disengage them from a direct tie to PGP monomer as is now prevalent throughout the industry, in a potential shift noted by Greenberg. "The hope is to eventually expand margins though disciplined production and inventory management," Greenberg said.

Spot resin trading activity improved, much to the satisfaction of suppliers who have been trying to lighten their inventories. While buyers were not out chasing material, if the price was right, the deal got done. Producers are giving their $0.05/lb PE price increase a third try, but given tepid demand and spot weakness, just holding contracts steady in November might be considered a win. PP contracts will see in increase, but it should settle less than the sizable $0.07/lb currently on the table.